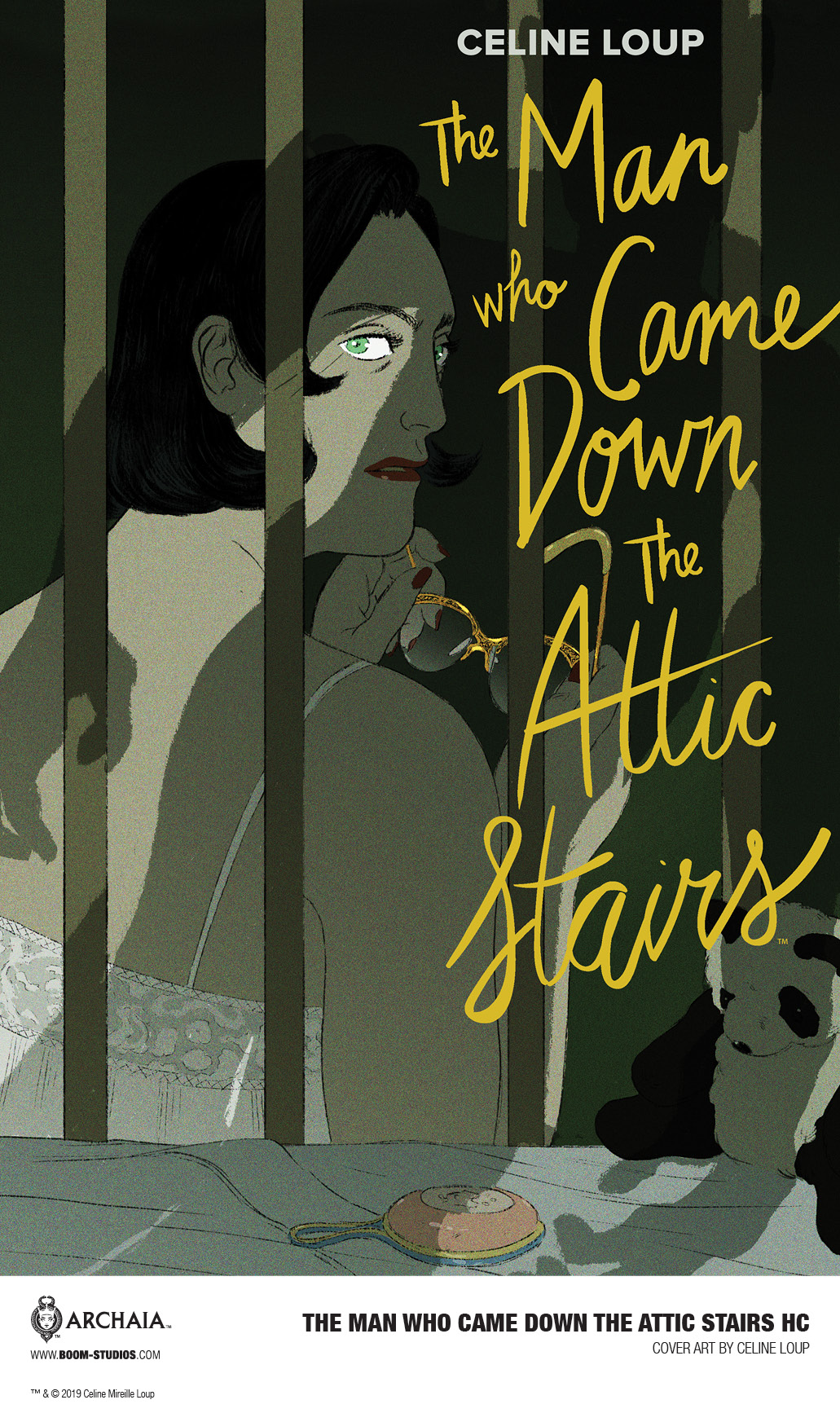 LOS ANGELES, CA (March 20, 2019) – BOOM! Studios today announced THE MAN WHO CAME DOWN THE ATTIC STAIRS, a new original graphic novel inspired by the works of Shirley Jackson and Ira Levin, in which acclaimed comics creator Celine Loup weaves a tale of horror and suspense that captures the isolation of postpartum depression, while exploring the very real fears associated with new motherhood. Arriving in stores September 2019.

Emma is excited to start a family in her new home, but after her child’s birth she finds her world turning upside-down. The infant cries like it’s scared of something, or someone, and Emma’s sleepless nights quickly drive a wedge between her and her husband, who seems uncharacteristically detached. When Emma begins to see strange things in the house, the line between reality and fantasy blurs and her grasp of what’s real and what’s not becomes even more clouded. Is something unnatural haunting the nursery? And what if it also affected her husband, who ventured up into the attic when they first arrived…

Celine Loup is an illustrator and Ignatz Award-nominated cartoonist who currently lives in France. She has done illustration work for The New York Times, The New Yorker, The A.V. Club, Variety, Lucky Peach, and Medium. Loup is the acclaimed creator of popular comics such as Honey and Mother, as well as her current ongoing series, Hestia. Her work has garnered an Ignatz Awards nomination, recognition on the Best American Comics “Notable Books” list,  and acclaim from American Illustration, The Society of Illustrators, and CMYK.

“I wanted to tell a story about a fear that women dare not speak aloud, not even to themselves, often until after it’s too late. Motherhood brings so much joy to the women who experience it, but for many it can feel like a prison, and no one can be certain until they’ve crossed a point of no return how it will be for them.” said creator, Celine Loup. “Horror’s greatest potential is the gift of empathy, and I hope THE MAN WHO CAME DOWN THE ATTIC STAIRS will create a space in which we can reach out to each other in times of personal crisis without fear of judgement.”

THE MAN WHO CAME DOWN THE ATTIC STAIRS is the latest release from BOOM! Studios’ ambitious Archaia imprint, home to graphic novels such as Mouse Guard by David Petersen; New World by David Jesus Vignolli; Jane by Aline Brosh McKenna and Ramón Pérez; About Betty’s Boob by Vero Cazot and Julie Rocheleau; Bolivar by Sean Rubin; and licensed series including Lev Grossman’s The Magicians: Alice’s Story by Lilah Sturges and Pius Bak; Jim Henson’s The Power of the Dark Crystal and Jim Henson’s Labyrinth: Coronation.

“Celine’s work oozes with emotion. With a single look her characters reveal their humanity or, perhaps in this case, lack thereof,” said Sierra Hahn, Executive Editor, BOOM! Studios. “Like the very best horror films, THE MAN WHO CAME DOWN THE ATTIC STAIRS conjures from its audience sincere empathy for its protagonist and a deep sense of unease for what lives within the shadows . . .”

Print copies of THE MAN WHO CAME DOWN THE ATTIC STAIRS will be available for sale September 18, 2019 at local comic book shops (use comicshoplocator.com to find the nearest one), September 24, 2019 at bookstores, or at the BOOM! Studios webstore. Digital copies can be purchased from content providers, including comiXology, iBooks, Google Play, and the BOOM! Studios app

For continuing news on THE MAN WHO CAME DOWN THE ATTIC STAIRS and more from BOOM!, stay tuned to www.boom-studios.com and follow @boomstudios on Twitter. 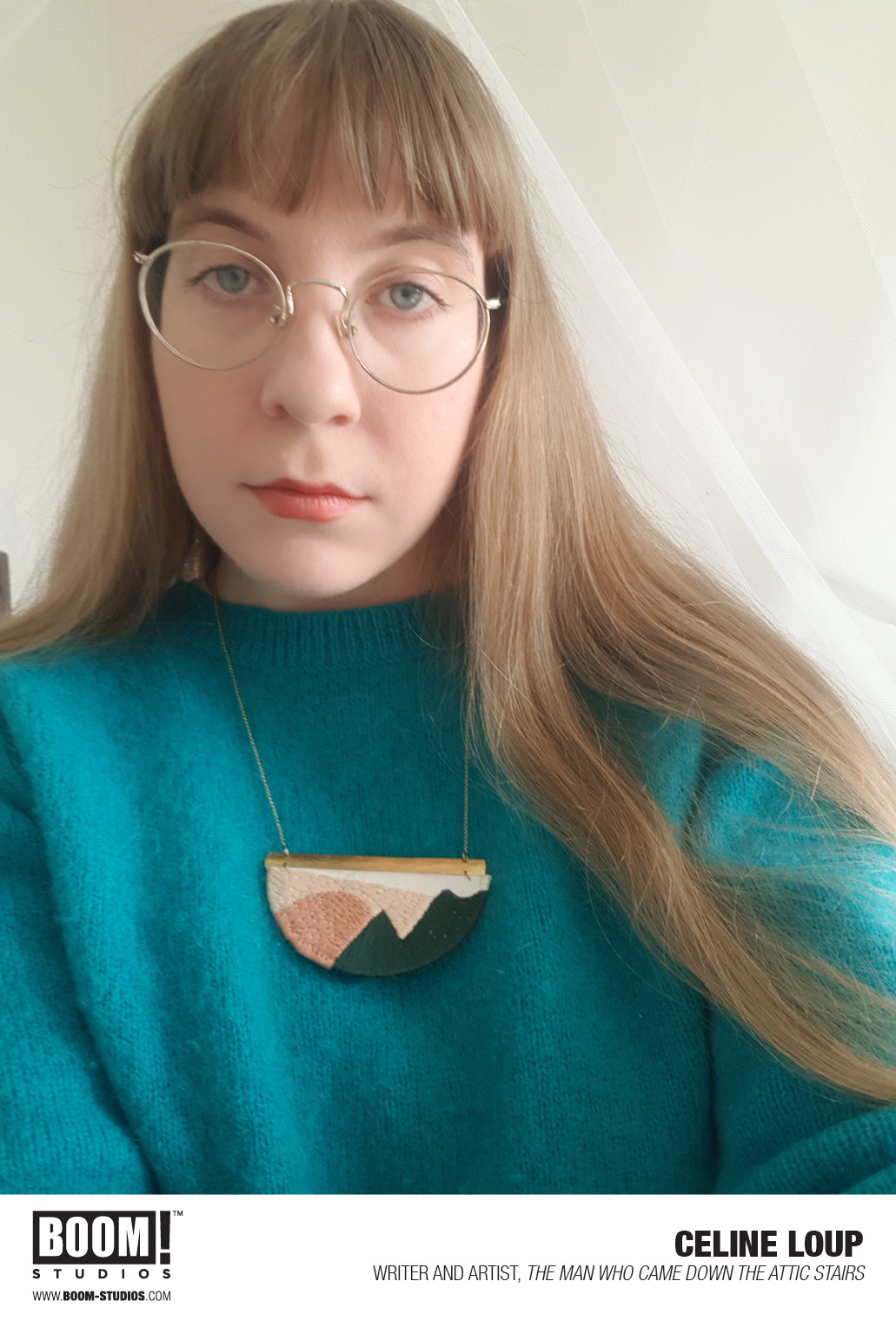