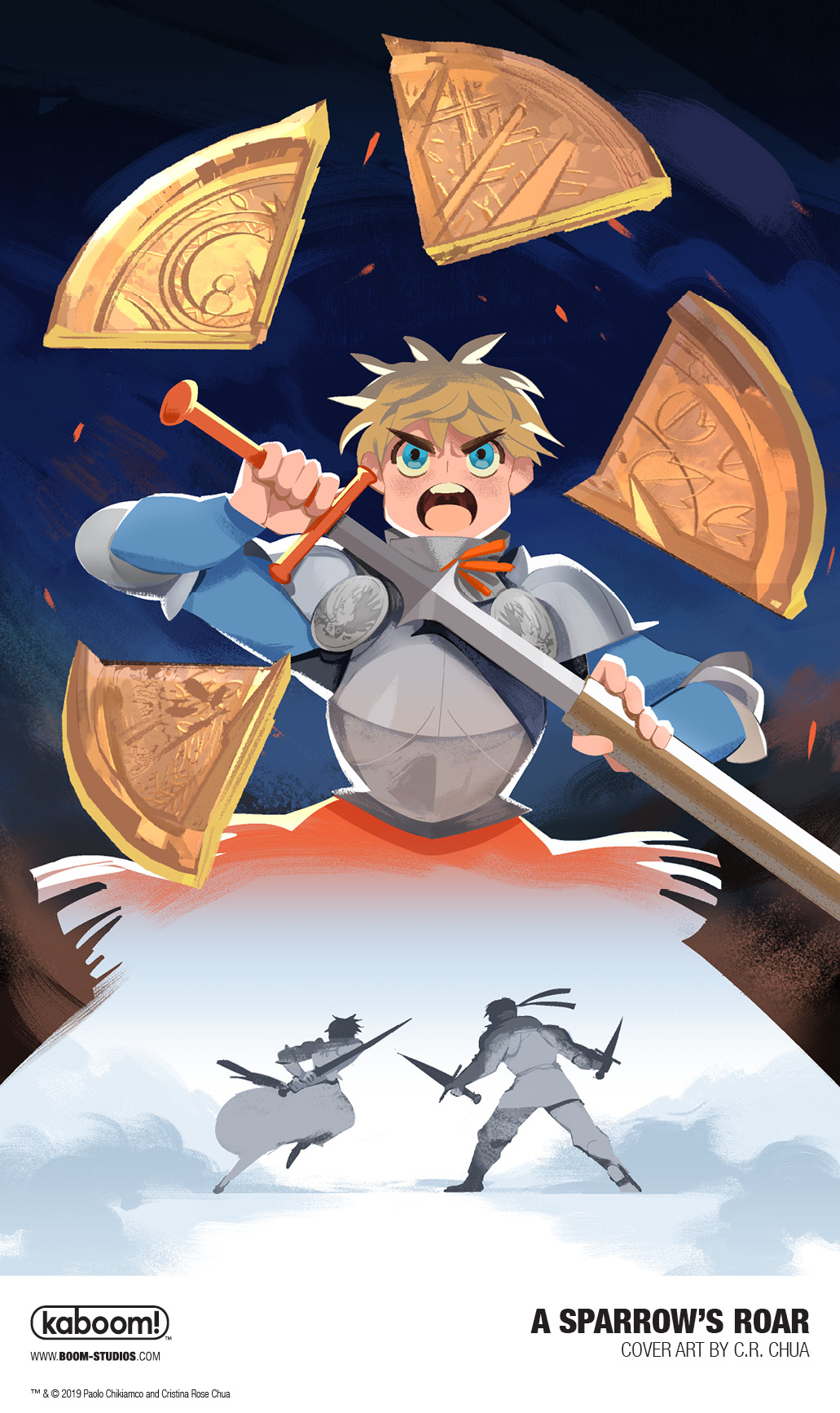 LOS ANGELES, CA (March 14, 2019) – BOOM! Studios today announced A SPARROW’S ROAR, a brand new original graphic novel from cartoonist C.R. Chua and co-writer Paolo Chikiamco about a young knight who must assume the identity of her sister in order to save her kingdom, which will debut in stores October 2019.

Elena of Esterpike is the revered commander of the most famed warriors in all the land— the legendary Lions of Esterpike. But when disaster strikes, it is her sister Per, a mere knight-in-training, who must gather allies in the face of an enemy even the Lions could not defeat. Together with the help of Elena’s second-in-command Amelia, Per takes on the role of her perfect older sister as she travels to the capital city to rally the troops and convince the generals of their neighboring city-states to provide aid against the oncoming horde. But she’ll have to stay on her toes as the poisonous intrigue of the court tears away at her secret identity and makes it that much harder to build the forces necessary to fend off the coming invasion.

C.R. Chua is an artist and illustrator who is interested in themes of identity, self-realizations and friendship. She has worked for BOOM! Studios as a colorist and artist on titles such as Adventure Time, Steven Universe, and Regular Show. She also illustrated the story Humanity in the Philippine National Book Award-nominated comic anthology, Mythspace.

“I’m excited to finally share A SPARROW’S ROAR with the world. At its core, it’s a story about brothers and sisters, about filling the spaces they leave behind, and about the power of a stubbornly awkward cog to wreck the most meticulously designed of machines,” said writer and artist, C.R. Chua. “I also love drawing ladies in armor very, very much.”

Paolo Chikiamco is a Filipino writer of prose, comics, and interactive fiction. His prose has been published in anthologies such as The Sea is Ours and the Best of Philippine Speculative Fiction, and his interactive wrestling novel Slammed! was released by Choice of Games. He has also served as a judge on multiple occasions for the Graphic Literature category of the National Book Awards in the Philippines.

“The women in my life have always been what society would dub as ‘strong’—but they were always simply women to me, and strength just an innate characteristic. Tina and I wanted to tell a story with a cast of women warriors, in a setting where they’d be notable for their skill rather than their sex,” said co-writer, Paolo Chikiamco. “With A SPARROW’S ROAR, we hope we can immerse readers in such a world… and then make them fear for its survival, of course.”

“A SPARROW’S ROAR is a beautiful fantasy tale, full of intrigue, dueling knights, and science that truly delves deep into the ideas of identity and what it takes to step up to the fight,” said Shannon Watters, Senior Editor, BOOM! Studios. “The gorgeous illustrations and intriguing characters will instantly hook any fan of high fantasy and grand adventures!”

Print copies of A SPARROW’S ROAR will be available for sale in October 2019 at local comic book shops (use comicshoplocator.com to find the nearest one), bookstores or at the BOOM! Studios webstore. Digital copies can be purchased from content providers, including comiXology, iBooks, Google Play, and the BOOM! Studios app.