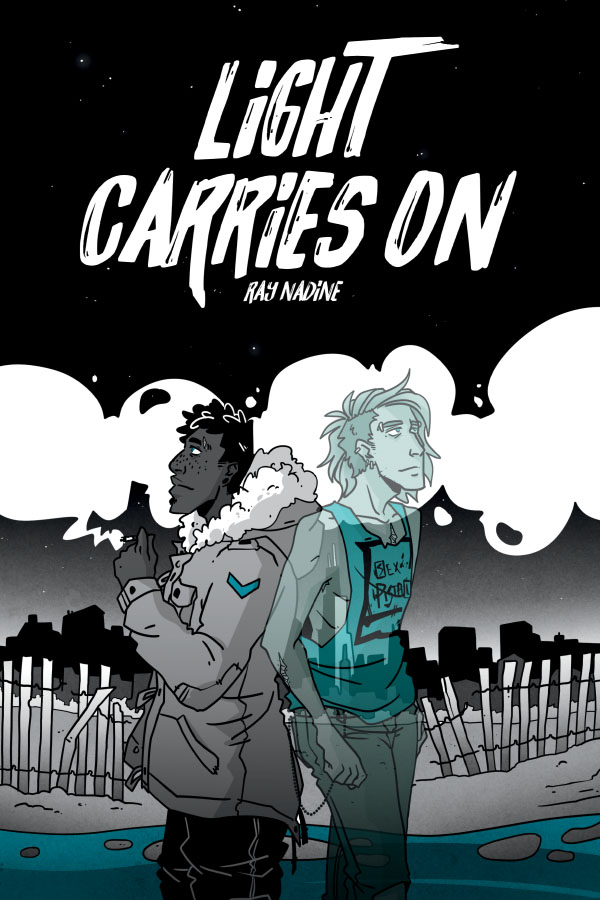 He thought life couldn’t get more complicated, but then he became friends with a ghost.

MILWAUKIE, Ore., (July 8, 2022)— Dark Horse Books presents Light Carries On, an otherworldly LGBTQ romance from Ray Nadine (Dollhouse, Messenger, Raise Hell!). Perfect for fans of Mooncakes, Laura Dean Keeps Breaking Up with Me, and One Last Stop, this greyscale and spot color graphic novel will be presented in hardcover in March 2023.

When Leon’s camera unexpectedly breaks, he is forced to borrow a used one from his mom’s antique store. As he snaps the first picture, the ghost of the camera’s former owner is released, and the two are inexplicably linked. After taking Leon’s body for an accidental joyride, the ghost introduces himself as Cody, a queer punk rocker who died decades ago. Of course, he doesn’t remember how he wound up dead, but the two decide investigating might be the only way to end the haunting.

Leon has been reeling from a recent break-up with his boyfriend, recovering from his time in the military, and trying to become a photographer who can afford to take pictures of something more than high school proms and weddings. So, being the only one able to see and talk to a ghost that died before cellphones, Wikipedia, or iTunes seems like a great way to fill his ample free time. The two get closer as they travel around Chicago showing each other the landmarks of their pasts and trying to unearth the secrets around Cody’s mysterious death. They discover they have much more in common than expected as they explore the complexities of life, love, and afterdeath, taking breaks to jam out to tunes, hang out in planetariums, and slurp down frozen beverages.

On Light Carries On, Ray said, “For most of my life, I lived in St. Louis, and in that time I created my first comic. It was an important story to me, an open love letter to the city of St. Louis, a processing of grief and trauma, and a means for me to live truthfully in a time that I couldn’t. Eventually, I outgrew the story; continuing to create it kept me in a depressing place I didn’t want to be. I still love St. Louis dearly, but years ago I moved to Chicago. And now, Light Carries On is my open love letter to the city of Chicago, to the thought that we’re not alone in our struggles, and to being unapologetically queer. All of my stories are that last bit, unapologetically queer, but Light Carries On carries what my first comic didn’t: a light of hope at the end. I hope that those who read it find that light, as creating it helped me do the same!”