Watch comic book artist Steven Butler in his first unboxing video as he is blown away by the art and storytelling of Hal Foster’s famous comic strip Prince Valiant. 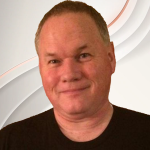