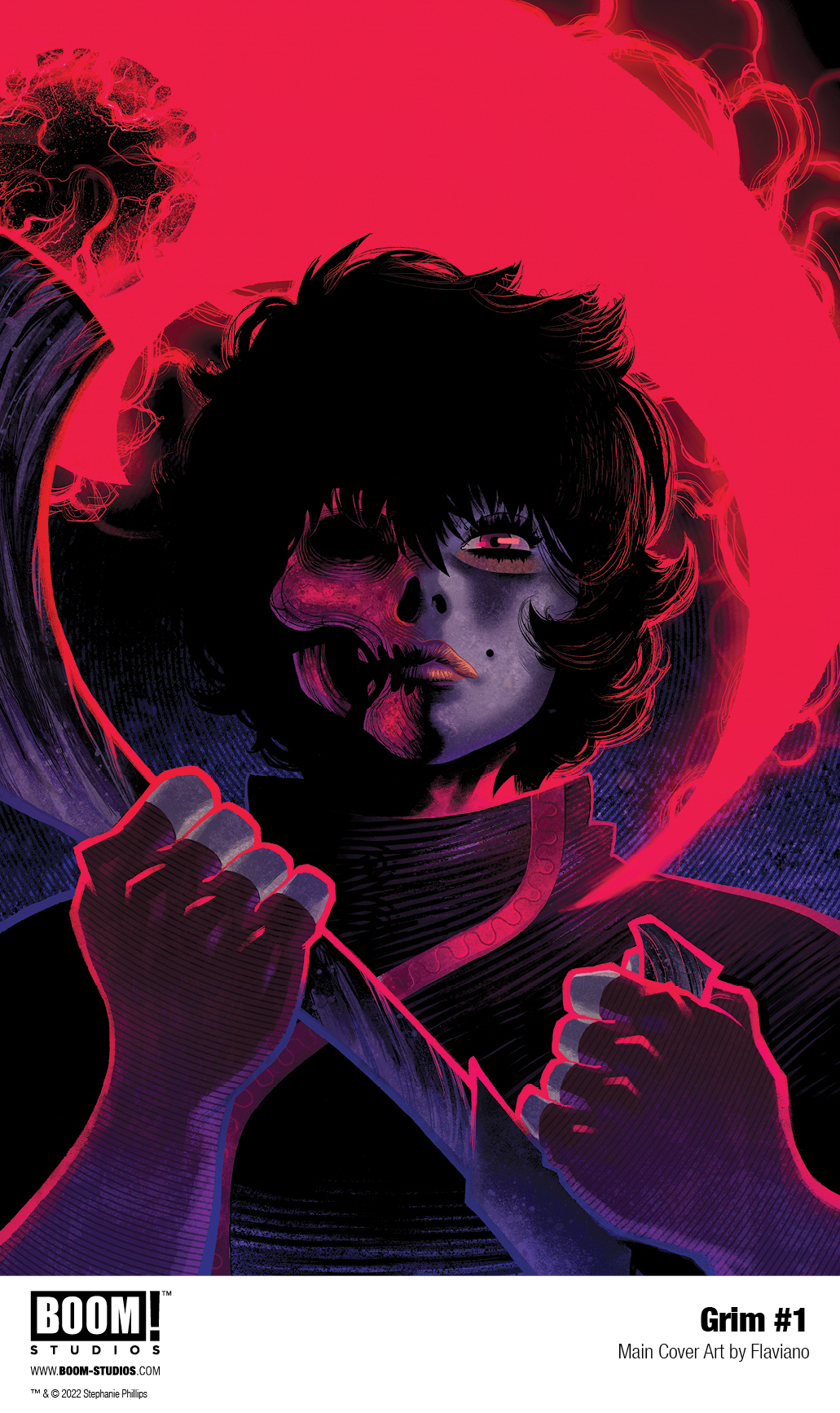 Jessica Harrow is dead. But her journey has only just begun!  Discover the world of the afterlife, where Jessica has been recruited as a Reaper, tasked with ferrying countless souls to their final destination. But unlike the rest of the Reapers, she has no memory of what killed her and put her into this predicament. In order to unravel the mystery of her own demise, she’ll have to solve an even bigger one – where is the actual GRIM REAPER?

Stephanie Phillips is an American writer known for comics and graphic novels such as Harley Quinn, Wonder Woman: Evolution, and The Butcher of Paris. Her stories and comics have appeared from DC, AfterShock, Oni Press, Heavy Metal, Dark Horse, Top Cow/Image, and more. Outside of comics, Stephanie also holds a PhD in rhetoric and composition.

“GRIM is dark and brooding and fixated on death… and also one of the most fun series I’ve ever written! With demons, reapers, departed souls, and Flaviano’s artwork, you’ll be dying to read more!” said Phillips.

Flaviano is an artist working in comics and animation. Living in Rome, Flaviano has handled storyboarding and character design for studios such as Filmax, Motionworks, Xilam, Rainbow. His comics have been published by Disney, Dargaud, BOOM! Studios, Marvel, DC Comics and Sergio Bonelli Editore.

“I love to draw new characters and share that excitement of creation with brilliant authors like Stephanie. She did an amazing job setting the groundwork for a character that you can’t help but love,” said Flaviano. “So it’s no surprise that I can’t stop drawing Jess and all the other reapers from this mysterious, funny, sad, weird story about the search for your true self and place in the world.”

“Stephanie, Flaviano, Rico, and Tom are some of the brightest stars in the industry today, and we could not be more thrilled to help them bring GRIM to life (or, rather, death),” said Eric Harburn, Executive Editor, BOOM! Studios. “If you’ve made previous stops in Mumbai with Laila Starr or Archer’s Peak with Erica Slaughter, let Jessica Harrow take you to your final destination.”

GRIM is the newest release from BOOM! Studios’ eponymous imprint, home to critically acclaimed original series, including BRZRKR by Keanu Reeves, Matt Kindt, and Ron Garney; Something is Killing the Children by James Tynion IV and Werther Dell’Edera; Once & Future by Kieron Gillen and Dan Mora; We Only Find Them When They’re Dead by Al Ewing and Simone Di Meo; Seven Secrets by Tom Taylor and Daniele Di Nicuolo; The Many Deaths of Laila Starr by Ram V and Filipe Andrade; Eve by Victor LaValle and Jo Mi-Gyeong; Basilisk by Cullen Bunn and Jonas Scharf; Regarding the Matter of Oswald’s Body by Christopher Cantwell and Luca Casalanguida, Faithless by Brian Azzarello and Maria Llovet; and the upcoming Alice Ever After by Dan Panosian and Giorgio Spalletta. The imprint also publishes popular licensed properties, including Dune: House Atreides from Brian Herbert, Kevin J. Anderson, and Dev Pramanik; Mighty Morphin and Power Rangers from Ryan Parrott, Marco Renna, and Francesco Mortarino; and Magic from Jed McKay and Ig Guara.

Print copies of GRIM #1 will be available for sale in May 2022 exclusively at local comic book shops (use comicshoplocator.com to find the nearest one) or at the BOOM! Studios webstore. Digital copies can be purchased from content providers, including comiXology, iBooks, Google Play, and Kindle.

For continuing news on GRIM and more from BOOM! Studios, stay tuned to boom-studios.com and follow @boomstudios on Twitter. 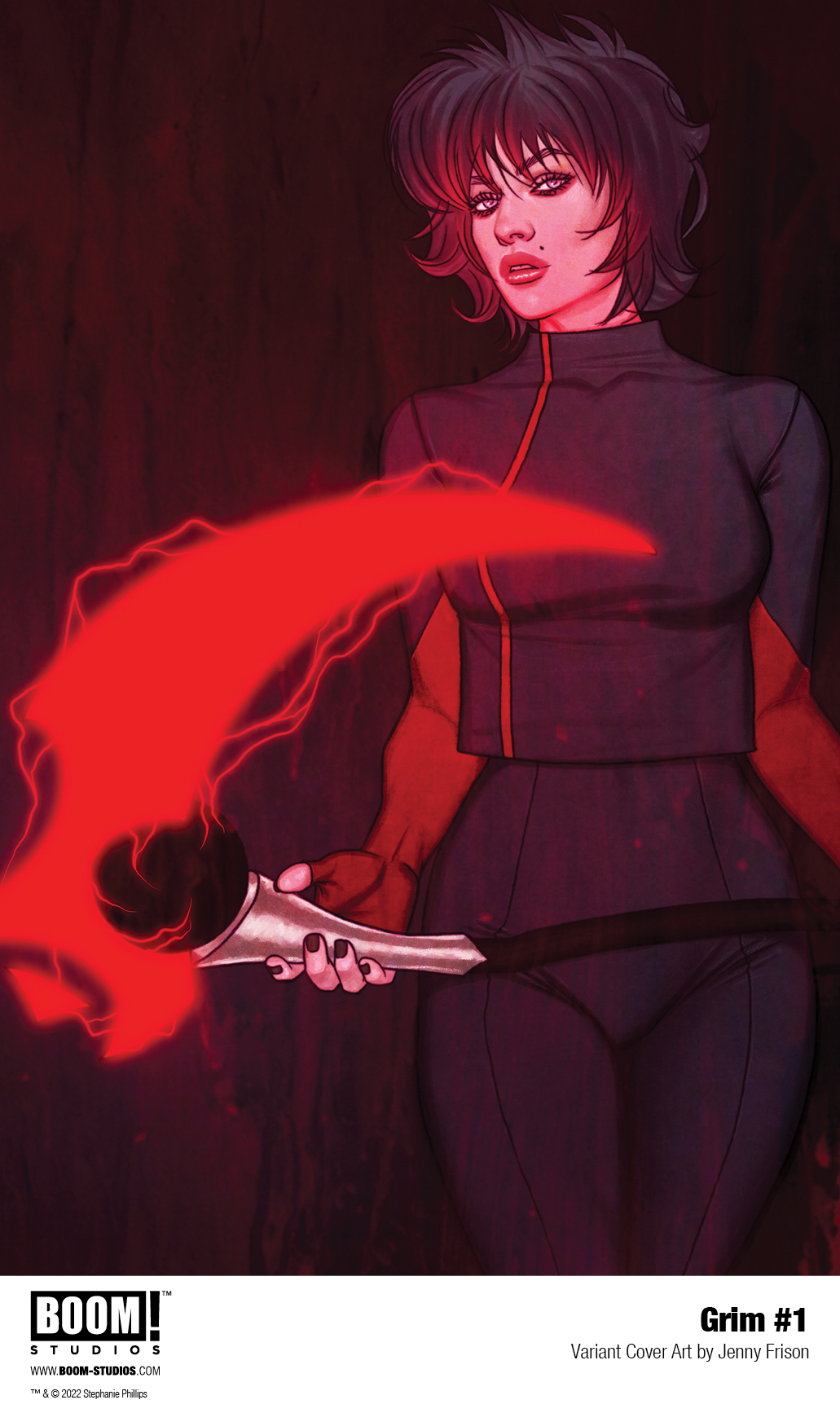 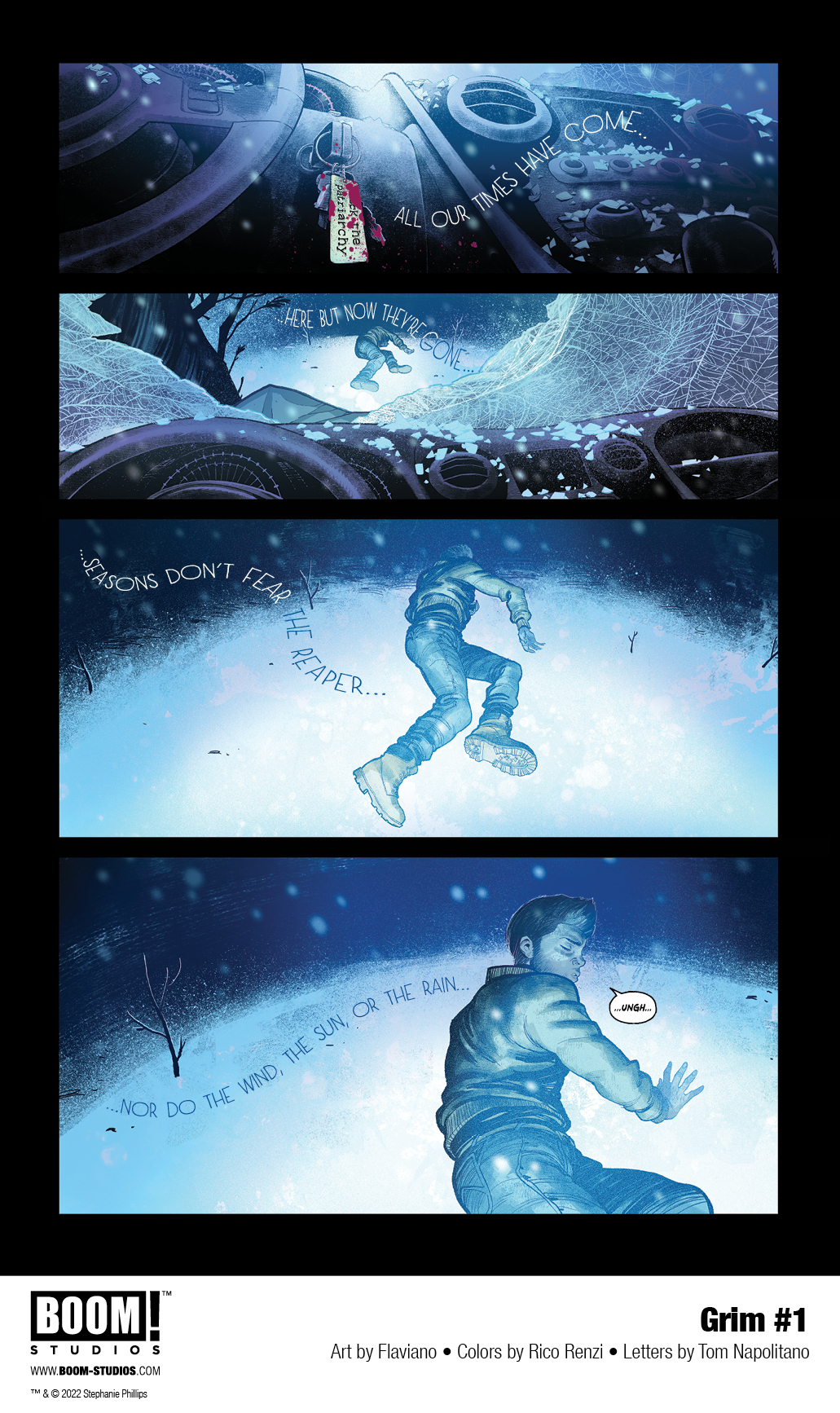 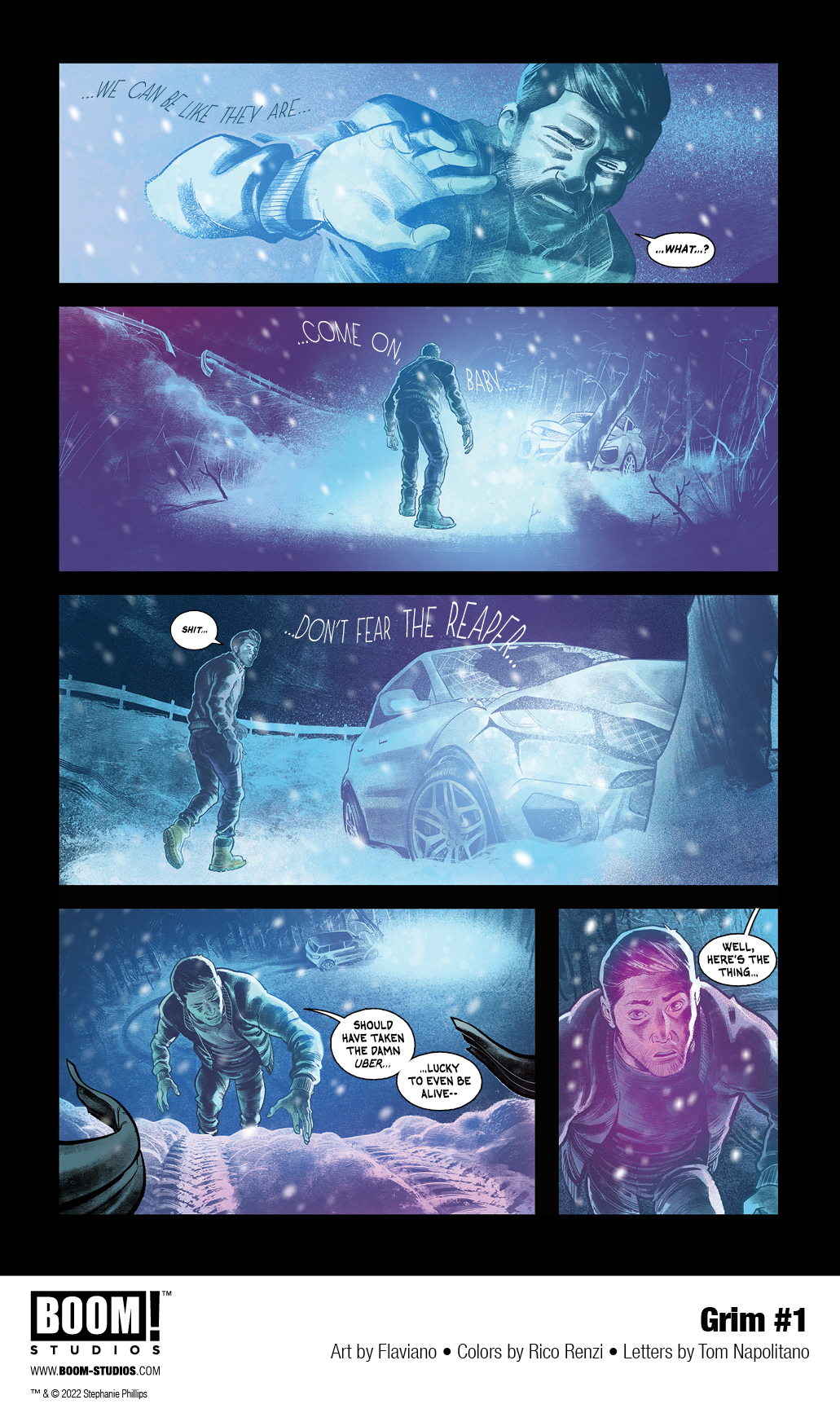 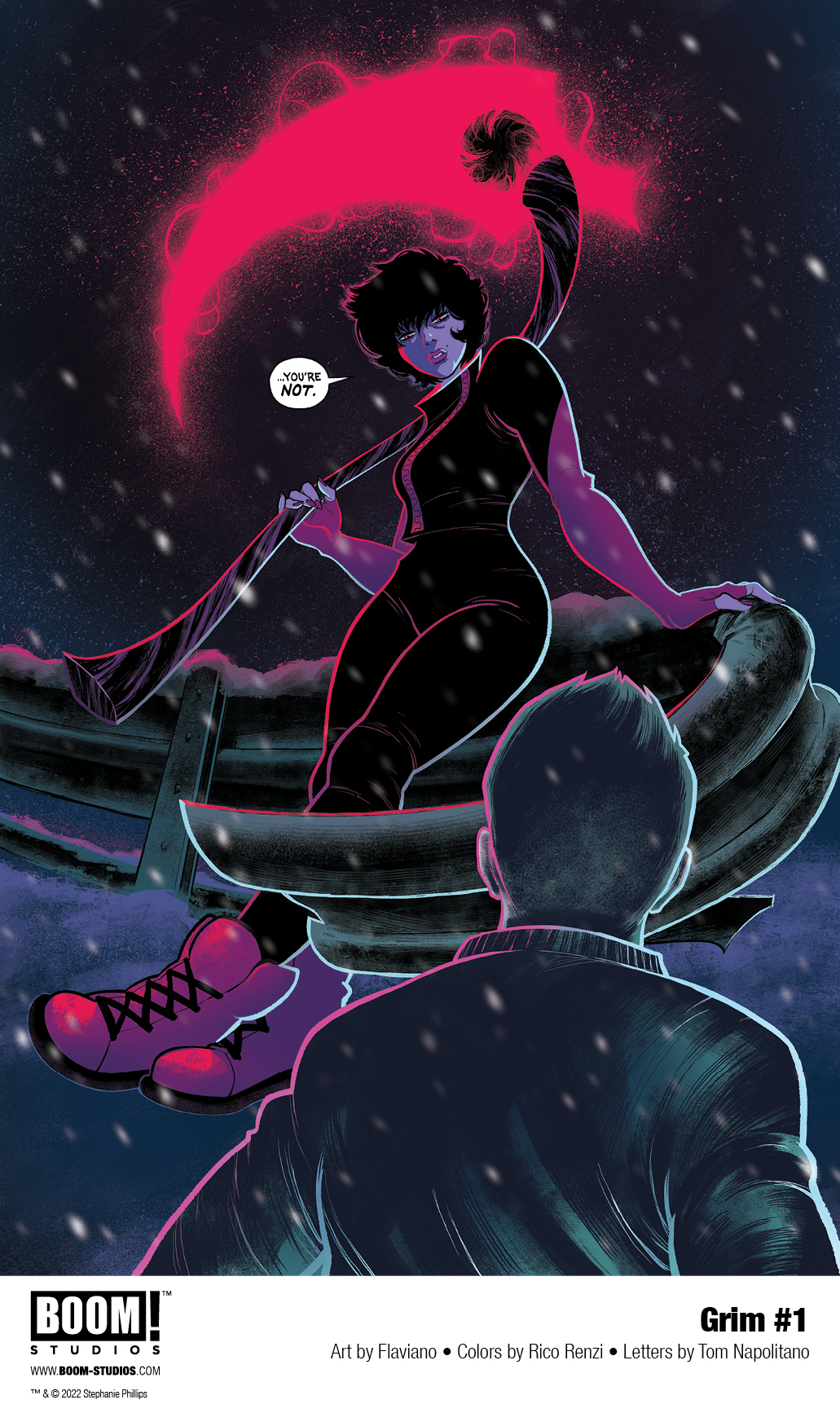