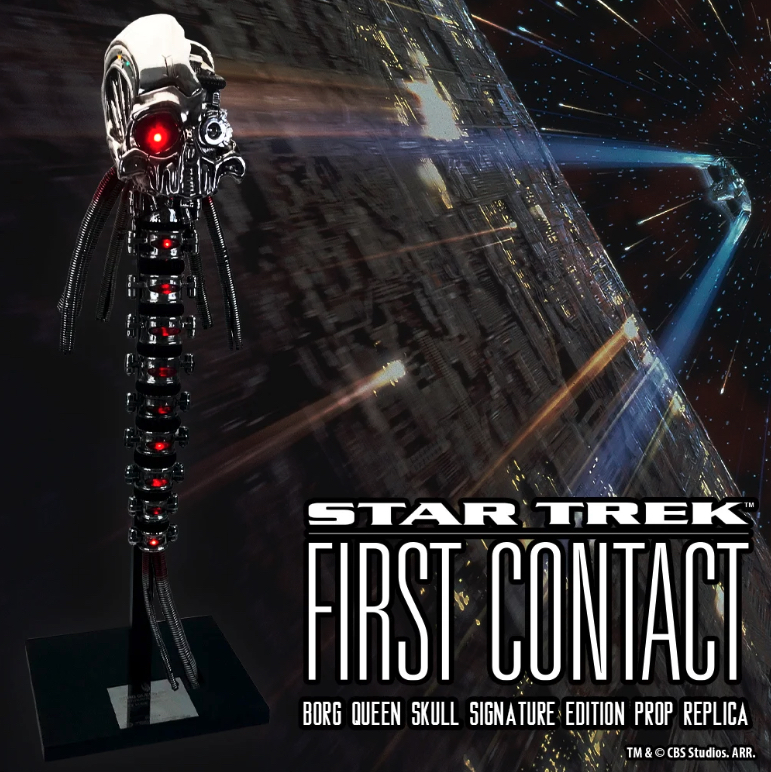 The Borg Queen was the entity that served as the central nexus for the Borg Collective. The Borg, a fusion of organic and synthetic matter, and their relentless pursuit of perfection brought fear to all quadrants of the galaxy and appeared in both Star Trek motion pictures and television series. Factory Entertainment’s Borg Queen Skull Replica replicates the cybernetic skull and spinal cord that remain after the Borg Queen’s body is dispatched by Captain Jean-Luc Picard during the climax of Star Trek: First Contact.

In the Star Trek Universe, the Borg Queen is not a single entity, but is one of many. In Star Trek: First Contact, she was memorably portrayed on-screen by Alice Krige. Factory Entertainment is proud to present this replica as a Signature Edition, with a plaque personally signed by Ms. Krige.

The main body of the replica is cast from heavyweight polyurethane resin with an electroplated chrome finish. The replica is augmented by various plastic and rubber parts to match the original prop and features an articulated spinal cord. On screen the prop was presented as being heavily damaged by corrosive plasma, so each replica has been hand-weathered to lend a ‘battle damaged’ appearance.