A graphic novel by Jay Piscopo creator of Commander X, Sea Ghost, and Thorus! Written by Brian Augustyn, Writer/Editor of The Flash, JLA: Year One, JLA: Secret Origins and Gotham By Gaslight!

A veritable who’s who of golden age super-heroes team-up to fight the Axis powers! With a super-hero fans dream package of rewards!

To learn more go to: 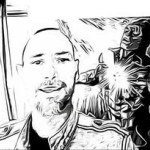 Christopher Watts is a writer and publisher from Valley Center California. He enjoys classic comics, old rock and talking about himself in the third person. The writer of Bullets & Bandanas and the upcoming Public Domain Vs. and Nightclaw, Christopher also publishes classic comics reprint series 80 Years of The Greatest Super-Heroes, It Came From the Public Domain and Monsters Amok!