True believer Noa, her cynical little sibling Gus, credulous camera man Ko, and Noa’s skeptical best friend (and secret crush) Astrid head to one of the most haunted towns in America to prove that ghosts exist, for all the social media likes! The investigations of hauntings uncover something more devilish than just a couple of ghosts, something that will put Noa and Astrid’s relationship to the test… and reveal the centuries-old sinister secrets of the town itself.

Bowen McCurdy is a cartoonist and writer from New York City. She graduated with a degree in cartooning from School of Visual Arts in 2018, and has self-published many short comics, as well as illustrated a short story for IDW and Marvel. This is her first graphic novel.

“This book is everything I wanted to read when I was young; queer characters on adventures, ghosts, romance, and only a handful of demons. The story is based on one of the first comics I ever did, so it has a big place in my heart. I fell in love with the SPECTER INSPECTORS while writing them, and even more so while bringing them to life through art. I’m so excited to share them with you!” said McCurdy.

Kaitlyn Musto is a cartoonist & writer from New York City. She attended School of Visual Arts and graduated in 2018. Since then, she has been working on various projects including co-writing a graphic novel with fellow cartoonist, Bowen McCurdy, creating character sprites for a fan project, and working on the pitch for her own historical fiction adventure graphic novel. You can find her work at her website katkomix.com, as well as on Instagram and Twitter @katkomix.

“SPECTER INSPECTORS is an exciting mix of paranormal shenanigans, cryptic mysteries, and a queer love story to give you the warm fuzzies—after all the horror,” said Musto. “I’m ecstatic to be able to finally share this ghostly adventure with the world. Working on this story has been an amazing ride, and I hope readers fall in love with the Specter Inspectors cast as I did writing them.”

“Who doesn’t love a misfit group of supernatural skeptics and true believers running into danger, solving mysteries, and falling in love while hot on the trail of this year’s trendiest ghosts?” said Shannon Watters, Senior Editor, BOOM! Studios. “Bowen and Kaitlyn have brought the incredibly loveable cast of SPECTER INSPECTORS and their ghost hunting adventures to life, and we can’t wait for readers to join in on the fun next year!”

Print copies of the oversized SPECTER INSPECTORS #1, featuring more than 30 story pages, will be available for sale in February 2021 exclusively at local comic book shops (use comicshoplocator.com to find the nearest one) or at the BOOM! Studios webstore. Digital copies can be purchased from content providers, including comiXology, iBooks, Google Play, and the BOOM! Studios app.

For continuing news on SPECTER INSPECTORS and more from BOOM! Studios, stay tuned to boom-studios.com and follow @boomstudios on Twitter. 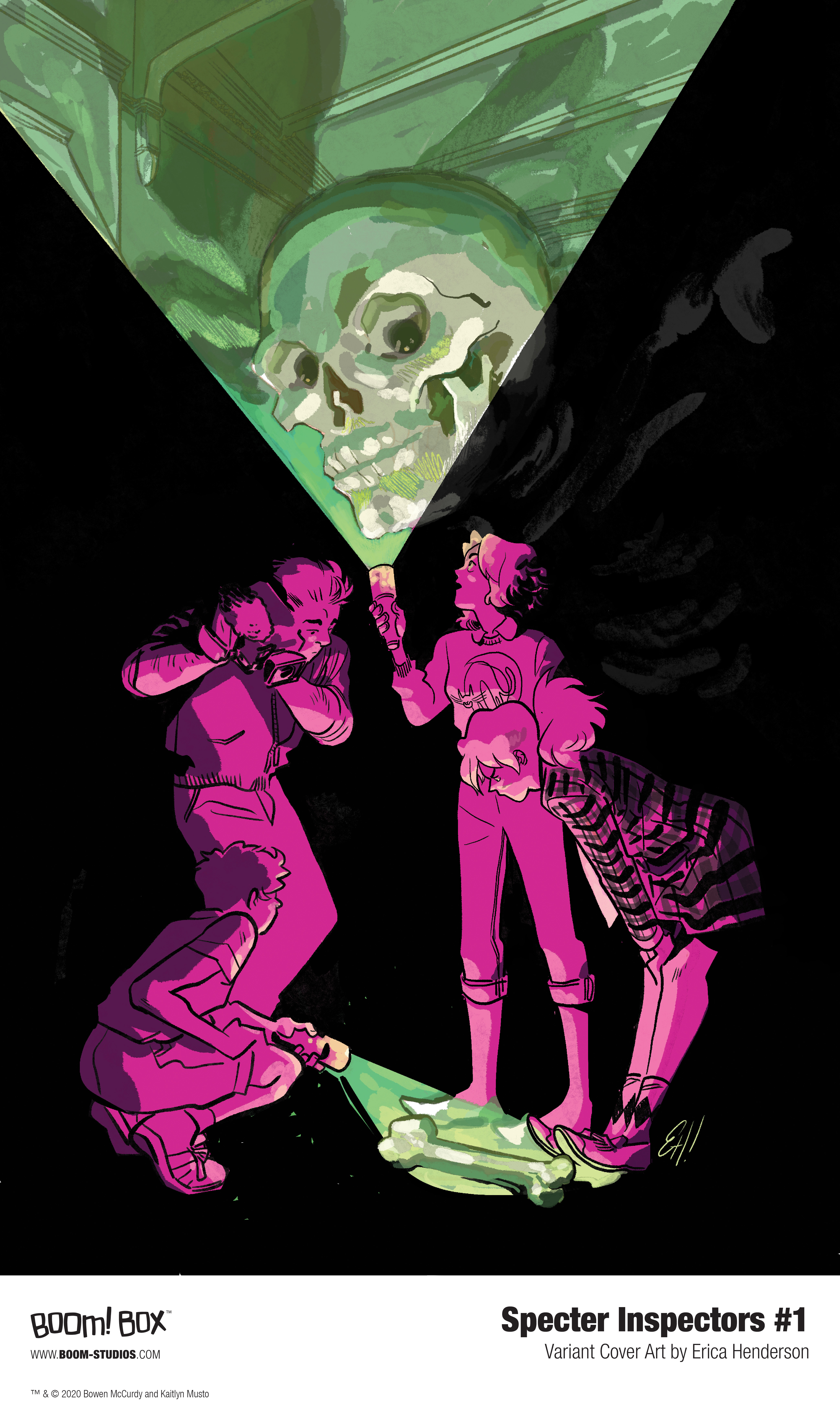