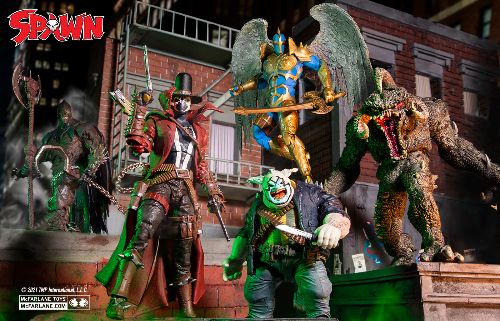 The newest and COOLEST line of Todd McFarlane’s SPAWN action figures celebrates the most iconic SPAWN comic covers ever released.   McFarlane Toys is releasing a line of action figures taken directly from the world record-breaking Spawn Comic covers.  Each iconic character has been sculpted with incredible detail and designed with McFarlane Toys signature “Ultra Articulation” with up to 22 moving parts for a full range of posing and play. Additionally, each iconic character action figure will feature character-specific accessories.  MSRP $24.99 to 49.99.  Pre-order now. Coming to retailers Aug 2021. Collect all McFarlane Toys Spawn Figures. 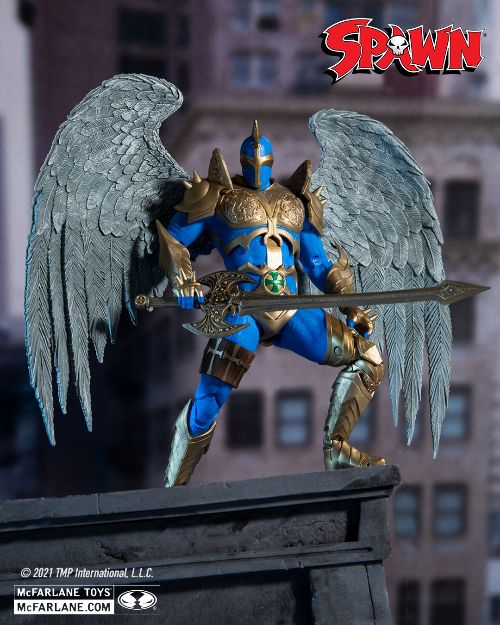 The Redeemer 7-inch Action Figure includes a sword and base.

The Redeemer is considered the Anti-Spawn, heaven’s equivalent of Hell’s Hellspawn.  A powerful religious warrior infused with heavenly matter and purpose to be a durable loyal warrior of God. A mysterious organization known as The Ethereal Masters chose worthy mortals to be the host of the Redeemer and transform into angelic warriors to battle Hell.  Unfortunately, the Redeemer typically retains no knowledge of their mortal lives even if they return to the mortal realm.  However, the current Redeemer Eddie Frank kept his memories. Fueled by his rage towards the Hellspawn’s, he has become the most powerful Redeemer to date. 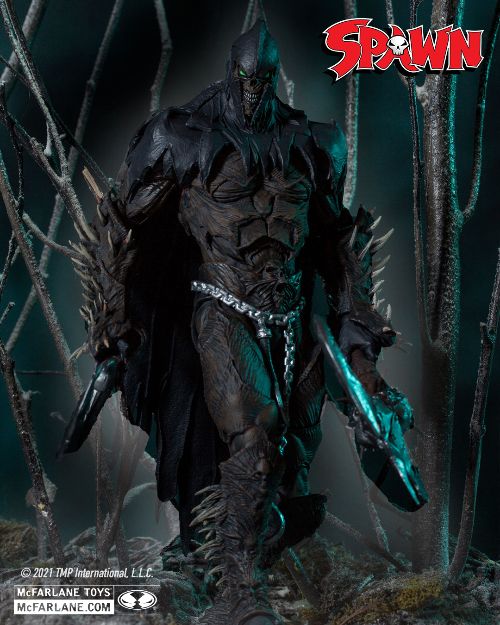 Raven Spawn 7-inch Action Figure includes an axe, scythe with chains, and base.
The demonic lord Kray-Von Gore, and one of Malebogia’s Death Knights, was credited with the creation of the K7-Leetha as known as the Hellspawn Suit.  The symbiotic suit adapted itself to its host to create a Hellspawn.  He was defeated, and the suit was sealed away in the Necro-Stone.  Anyone who found the stone was endowed with a Hellspawn suit and became a Spawn. 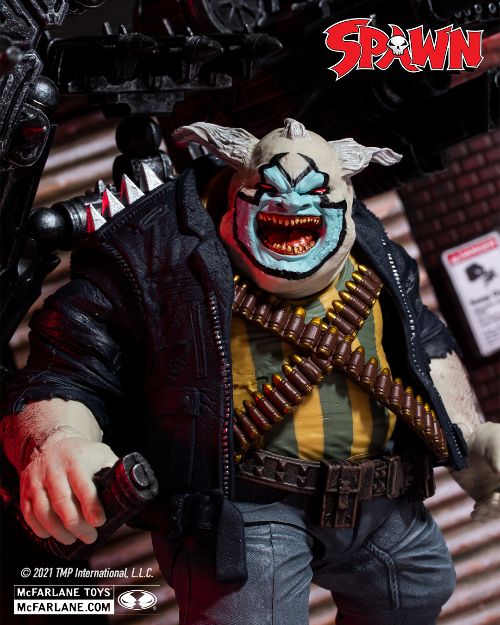 The Clown, a short, obese, ugly clown with rotting teeth and a blue mark in the shape of an M on his face, is the alter ego of The Violator.  Dubbed his secret identity and human disguise, he uses this ruse to walk among the humans to avoid detection.  Though Violator has shapeshifting powers to turn into anything he would wish, his distaste for humans leads him shifts into this putrid form to mock them because he sees them as disgusting, pathetic, and weak. 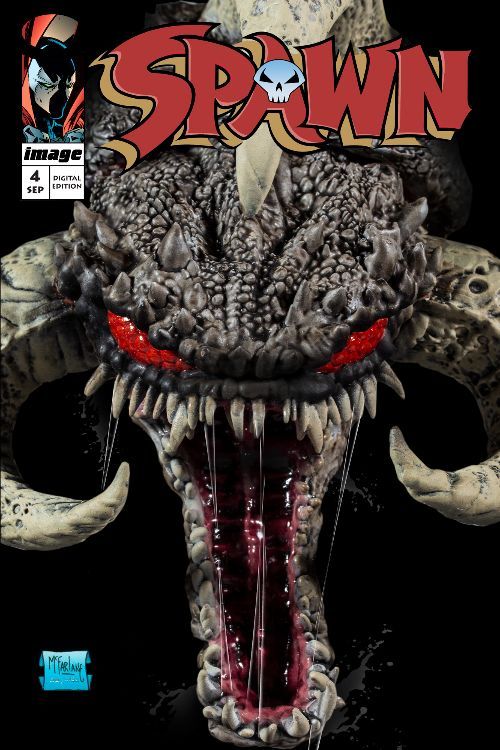 The Violator Megafig is a behemoth 9-inches tall.  Designed with “Ultra Articulation” with up to 22 moving parts, as well as a moving jaw for full range of posing and play.

The eldest of the five siblings, known as The Phlebiac Brothers, Violator, is a powerful demon of Hell who worked for Malebolgia.  He can shapeshift, possess humans and animals, and an array of other powers. He was sent to earth to train Al Simmons when he became a Hellspawn.  Violator, however, likes to do things his way and often antagonizes, manipulates, and gets in the way of Al Simmons on every possible occasion.  To even to his detriment of being at odds with Malebolgia and his brothers, Violator is self-serving and vindictive and a major pain in Spawn’s ass. 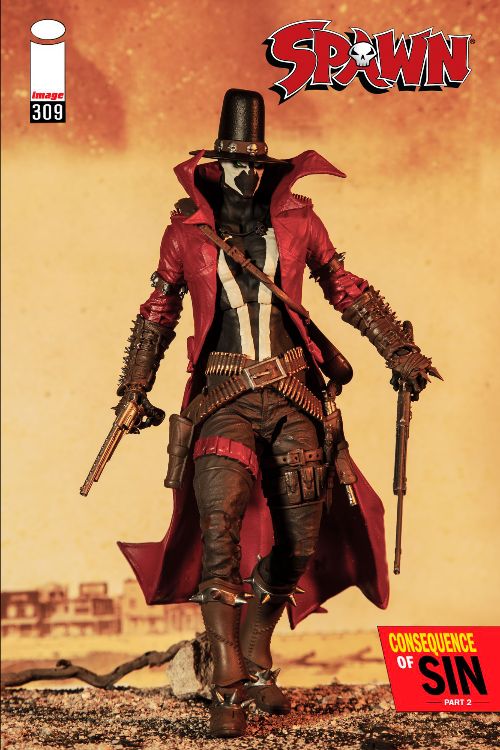 Gunslinger Spawn includes a rifle, pistol, and rifle holster, and base.

Jeremy Winslow, a landowner in the town of Bane, was pursued by the wealthy businessman of the town Ed Kemper, who wished to take Jeremy’s land.  After not getting the land by traditional means, Ed Kemper slaughtered Jeremy’s family and framed Jeremy for their murders.  Jeremy was hanged for the crime without a trial, but Mammon, a demon of wealth and greed and one of the seven princes of Hell, came to him when he was close to death and promised him the power to enact his revenge on Ed Kemper.  Jeremy agreed and was transformed into a Hellspawn and killed everyone in town except for one individual asked by Mamon to spare.  This individual would be the ancestor of Al Simmons.  When Jeremy’s job was complete, he descended to Hell. 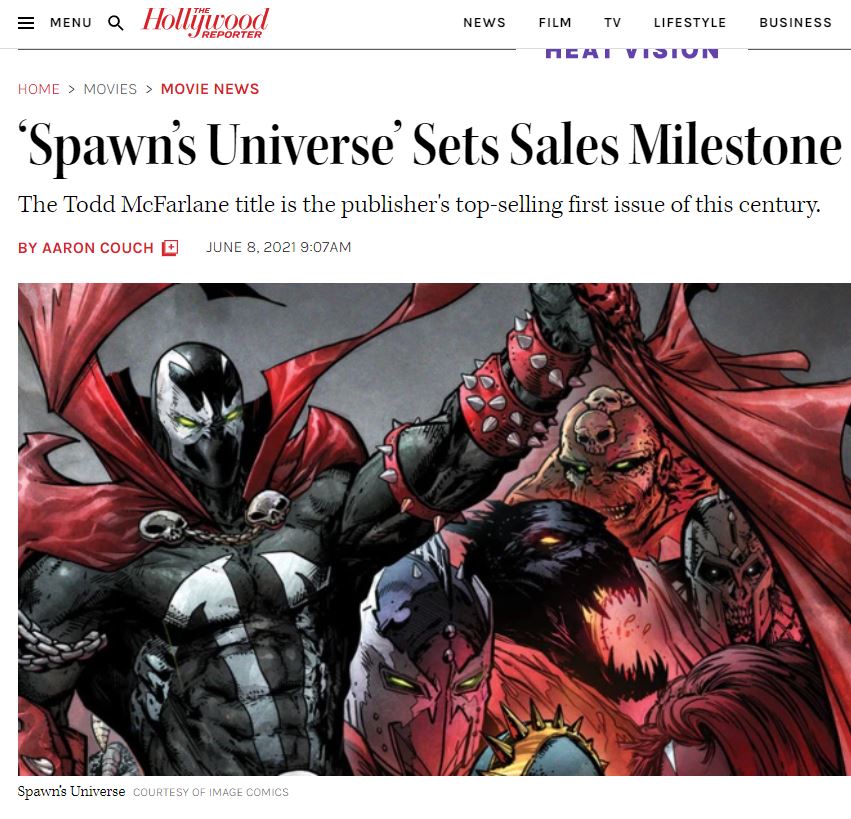 The SPAWN franchise is bigger than ever before and has sold millions of comics and toys worldwide.

On the heels of SPAWN’S UNIVERSE #1, in stores now, a brand new title, King Spawn will be Todd McFarlane’s first NEW ongoing Spawn series since 1992. King Spawn, out in August, is expected to have even bigger sales than Spawn’s Universe #1.