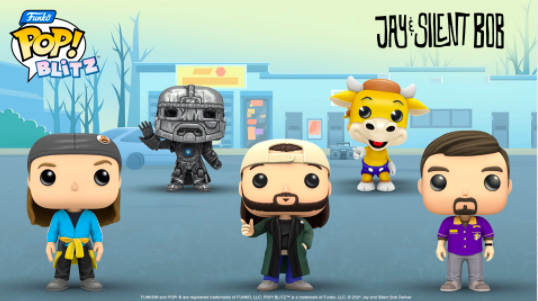 Everyone’s Favorite New Jersey Slackers Get the Funko Pop! Treatment as They Bring Their High-Flying Shenanigans to the Fast-Paced Match-3 Game

OCTOBER 13, 2021 – SAN FRANCISCO – N3TWORK, a games, media, and technology company at the intersection of entertainment and community, is bringing Jay & Silent Bob, the classic characters from Kevin Smith’s Clerks and the View Askewniverse, to Funko Pop! Blitz – the official Funko Pop! match-3 puzzle game – for a limited-time Tag Team in-game event featuring a never-before-seen Pop! of Dante Hicks created just for the game.

Starting today, Wednesday, October 13 at 5:00 p.m. PT until next Tuesday, October 19, players will have the opportunity to expand their in-game Funko Pop! collection with classic pop-culture favorites Jay & Silent Bob, Kevin Smith’s beloved convenience store clerks. Funko Pop! Blitz is free to play and can be downloaded today via the Apple App Store for iPhone and iPad and Google Play Store for Android devices.

Players can chill out and slack off with their favorite View Askewniverse characters Mooby, Dante Hicks, Jay, Iron Bob and Silent Bob. In order to collect them all, players will need to collect Silent Bob’s Boombox so they can jam out to tunes outside the Quick Stop Groceries! Dropping down the Boombox on the board in each match and collecting all the characters will unlock Silent Bob – an event exclusive Pop!

As a Tag Team event, players can swap between two Pops! during a match and leverage both of their unique Super moves in strategic new ways! Players can choose their Team by selecting their Main Pop! and a Tag Team Partner before each match. Strategically choose Pops! whose Supers compliment each other, pick them according to personal playstyle, or just select a favorite to play with. Each Pop! will have a set of available Partners to choose from. Special boxes can be purchased in the Shop throughout the event if players do not already own any of their partner Pops! Fill and activate a Super ability to swap between Tag Team partners during each match