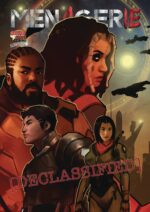 ROCKABILLY MONSTERS #1
OCT211731
(W) Sergio Rios, Jose Cruz (CA) Walter Pereyra (A/CA) Sergio Rios
Candy, a girl who seeks to solve the mysterious disappearance of her family, by chance of fate is involved with a group of monsters of different races: a wolf, a vampire, Frankenstein’s monster and a sea creature. Together, they will form a unique alliance and put aside their rivalry of hundred of years, which will take them to the very ends of reality when they try to stop the arrival of a ancestral evil force to our earthly plane.
In Shops: Dec 15, 2021
SRP: $3.99

STEAMPUNK SNOW QUEEN #1 (OF 2)
OCT211732
(W) Rod Espinoza (A/CA) Rod Espinoza
From the mastermind behind Neotopia and Courageous Princess comes this spectacular steampunk take on a classic fairy tale! In a far-off kingdom, the queen sends her armies of steam-powered juggernauts to successful conquest, all while she and her subordinate lords pass the wartime expenses on to the peasants. Her daughter, Princess White, protests to no avail. The commoners’ only hope is the daring raider Lone Fox, but on his latest assault the vigilante is ambushed!
In Shops: Dec 15, 2021
SRP: $3.99

THESE DAMN KIDS #2 (OF 3) (MR)
OCT211734
(W) Bradley Golden, Peter Breau (A) Helmut Racho (CA) Oscar Pinto
The outbreak of violence has ravaged the small town of Vicksburg, Mississippi. A small town cop is thrust into the midst of it all. Can Gary Marshall get to the bottom of what’s going on before its too late?
In Shops: Dec 15, 2021
SRP: $3.99

VICTORIA BLACK ONE SHOT (MR)
OCT211735
(W) Bradley Golden (A) Dan Garcia (CA) Carlos Villas
In this tale of espionage and betrayal, one of the world’s most dangerous assassin must protect her family from the organization she works for. Get ready for bullets, babies, and beat downs in this seedy tale.
In Shops: Dec 15, 2021
SRP: $3.99