BLACK COTTON #1 (OF 6)
DEC201650
(W) Patrick Foreman, Brian Hawkins (A) Marco Perugini
Set in an alternate reality where the social order of “white” and “black” is reversed, an elitist family, the Cottons, are rocked by a tragic shooting that begins to unravel long standing family secrets that could not only destroy the family but also divide the fragile social climate of the world.
In Shops: Feb 10, 2021
SRP: $3.99

BLACK FRIDAY #1 (OF 3) (MR)
DEC201651
(W) Jon Clark (A) Travis Williamson
Black Caravan Imprint! Black Friday is the biggest shopping day of the year. Millions of Americans pack the aisles of retail outlets all over the country battling for the best bargains. While an unlucky clean-up crew deals with the aftermath of the latest Black Friday frenzy, they discover that years of pent-up negative energy has released something very evil and dark into their superstore, which is just the way corporate wanted it.
In Shops: Feb 17, 2021
SRP: $3.99

BY THE HORNS #1 (OF 6) (MR)
DEC201653
(W) Markisan Naso (A) Jason Muhr
Elodie hates unicorns. For nearly a year, she’s dedicated her life to tracking down and killing them all for trampling her husband, Shintaro. Now exiled from her farming village of Wayfarer for selfishly neglecting her duties, Elodie and her half wolf/half deer companion, Sajen, search the continent of Solothus for clues to the whereabouts of unicorns. When they discover a lead in the port city of Lycus, their revenge mission suddenly takes a dangerous turn.
In Shops: Feb 24, 2021
SRP: $3.99 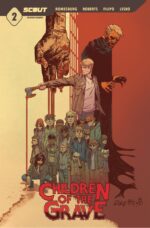 CHILDREN OF THE GRAVE #2
DEC201655
(W) Sam Romesburg, Ben Roberts (A) Gioele Filippo
The mysterious woman has revealed herself to Daniel as “The Mother.” Can she be trusted? Someone in Terra knows what Daniel is up to and has made him a target. If things weren’t safe for Daniel before, they are now treacherous.
In Shops: Feb 03, 2021
SRP: $3.99

FRANK AT HOME ON THE FARM #2
DEC201656
(W) Jordan Thomas (A) Clark Bint
Fear. Violence. Mystery. Paranoia. War. Animals. Frank’s deteriorating fast, both physically and mentally. His obsessions and post-traumatic stress are taking their toll as he continues to search for his missing family, whilst becoming more and more distrusting of the world outside the farm as he makes discoveries that raise terrible questions about the fate of his parents and brother.
In Shops: Feb 24, 2021
SRP: $3.99

GRIT TP
DEC201657
(W) Brian Wickman (A) Kevin Castaniero
When a routine troll hunting gig takes a gruesome turn, Old Man Barrow finds himself in the company of a wannabe doomsday cult. Just how’s he going to get out of this backwoods nightmare? Well, that axe ain’t just for show. Grit is Southern-fried sword and sorcery and pulp fantasy adventure in the mold of The Witcher by way of Southern Bastards. Collects issues #1-3.
In Shops: Feb 10, 2021
SRP: $9.99

PERHAPANAUTS FIRST BLOOD TP
DEC201658
(W) Todd DeZago (A) Craig Rousseau
Black Caravan Imprint! Black Caravan and Scout Comics proudly re-present the thrilling adventures of The Perhapanauts! For all of the paranormal phenomena out there, reports of unexplained events and strange, bizarre creatures roaming the edges of the night, there is an agency dedicated to investigate and bring those mysteries into the light of day. They are the Perhapanauts. (That the team is also made up of these weird, terrifying creatures is not lost on us. ) Bigfoot! Chupacabra! Mothman! Ghosts! Don’t miss the chance to get onboard this rollercoaster of a series right at the beginning! Collects The Perhapanauts: First Blood #1-4 plus 10 pages of all-new material.
In Shops: Feb 24, 2021
SRP: $19.99

RECOUNT #2
DEC201659
(W) Jonathan Hedrick (A) Gabriel Ibarra Nunez
Just after being sworn in as President of the United States, Meredith McDearmon discovers a plot to execute the Electoral College. Special Agent Barto and her race to save one of the members before The Masses get to him first. In the meantime, everyday American citizens are beginning to take matters into their own hands.
In Shops: Feb 17, 2021
SRP: $3.99

STABBITY BUNNY DARK ORIGINS ED
DEC201660
(W) Richard Rivera (A) Dwayne Biddix
Stabbity Bunny: Dark Origins reprints the first two issues of the original series in the Scout Prestige format! Read the stories that started it all! When 7-year-old Grace Lee is abducted, she finds an unexpected protector in the form of her plush bunny – or does she? The malevolent forces hunting the little girl’s family move into the final phases of their ultimate plan to either eliminate or recruit the last surviving members of the Lee family. This 64-page magazine format will also include previously unpublished, behind-the-scenes process pages, covers, and pin-ups!
In Shops: Feb 03, 2021
SRP: $9.99

VLAD DRACUL TP
DEC201661
(W) Matteo Strukul (A) Andrea Mutti
Vlad Dracul II, the Impaler, the Son of the Dragon, was a Warlord, a Voivod, a Guardian Warrior, an iconic historical figure who was able to successfully strike fear into the hearts of the fearsome Ottoman Empire. Vlad is an epic story of love and war, a historical ride with rivers of blood, tears, swords and love and a discovery of a man that was, perhaps, the most famous warrior of his era that inspired the Dracula legends. This is the story of the man behind the myth.
In Shops: Feb 17, 2021
SRP: $6.99

WHITE ASH PRESENTS GLARIEN ONE SHOT
DEC201662
(W) Charlie Stickney (A) Conor Hughes, Yishan Li, Fin Cramb (A/CA) Romina Moranelli
Just in time for Valentine’s Day, White Ash returns with three all-new tales exploring the romantic and bloody history of Glarien, the most dangerous elf to be found in the nine realms. This White Ash one shot is a perfect collection of stories for fans of Dejah Thoris, Red Sonja, or people who like seeing an elf who knows how to handle a sword.
In Shops: Feb 10, 2021
SRP: $3.99

MAPMAKER #1
DEC201664
(W) Ben Slabak (A) Francesca Carita
Scoot Imprint! Imagine a parallel Earth during The Age of Discovery. Imagine The Pirates of the Caribbean where the prize is a fantastical power wielded by a mysterious individual known simply as “The Mapmaker.” Any map he creates comes to life, a power highly desired by King Gus, who will stop at nothing to obtain it. The crew of the privateer ship The Rogue Wave, captained by the courageous Lei Li, are the only ones standing in their way with a mission to deliver The Mapmaker’s successor before his power wanes and is lost forever. A fun tale for all ages! Enjoy the first issue of this NON-STOP! followed by the entire story collected soon after in one volume.
In Shops: Feb 03, 2021
SRP: $1.99