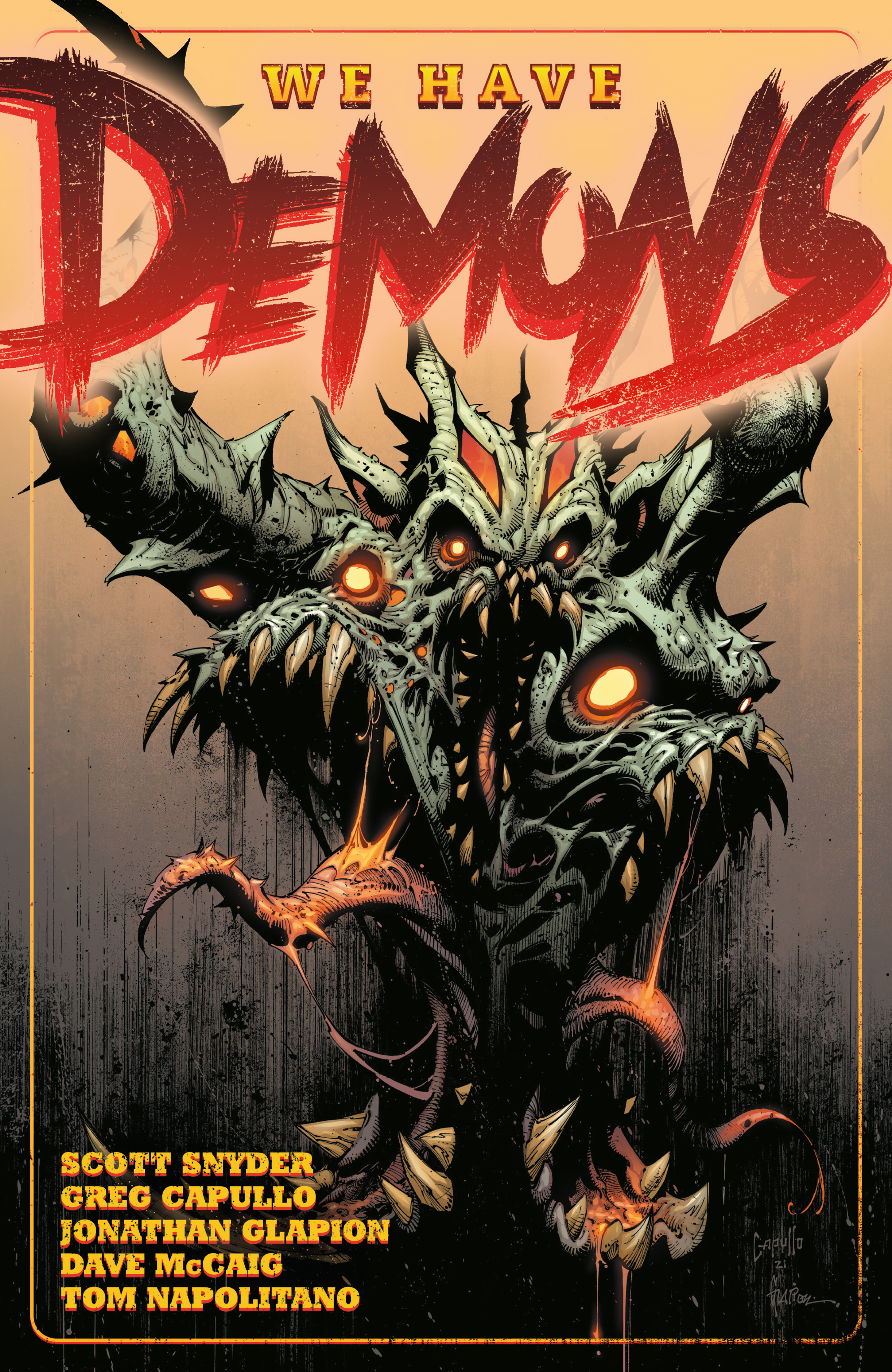 by Snyder and Co-Creator Greg Capullo

MILWAUKIE, Ore., (December 14, 2021)—Bestselling writer Scott Snyder’s Best Jacket Press, comiXology Originals, and Dark Horse Comics are announcing that Dark Horse will publish print editions of the critically acclaimed comiXology Originals titles from Snyder’s Best Jackett Press. The print publishing program kicks off in spring 2022 with the release of periodical issues of We Have Demons by Snyder, superstar artist and co-creator Greg Capullo, inker Jonathan Glapion, colorist Dave McCaig, and letterer Tom Napolitano. All three periodical issues of We Have Demons will feature variant covers by superstar artists, with issue 1 debuting in March. The trade paperback of We Have Demons will be published by Dark Horse in summer 2022.

“Greg and I got our start in comic shops and we’ll be forever grateful for all the support we’ve received from fans and retailers over the years,” said Snyder. “We have the best fans in the world and we can’t wait for this crazy story to reach the direct market.”

We Have Demons features full throttle entertainment by two comic book megastars, featuring action, conspiracies, secret organizations, monsters, mayhem, and a climactic war of good and evil with no less than the fate of the world hanging in the balance. The periodical issues will be released monthly, with each issue featuring bonus material and a main cover by Greg Capullo. Each issue will also have variant cover options including a foil variant cover of the main cover as well as a variant cover by one of Snyder’s incredible collaborators:

We Have Demons is currently the only one of the Best Jackett/comiXology Originals titles that will be released as a print periodical.

“Scott Snyder is one of the preeminent storytellers in comics,” says Mike Richardson, Founder and President of Dark Horse Entertainment. “The co-creators of these comics are truly some of the most distinguished and popular artists working today and We Have Demons is the perfect debut title from Best Jackett and comiXology Originals, as it joins Dark Horse’s prestigious library of groundbreaking horror comics, alongside the likes of Hellboy and Harrow County.”

“ComiXology Originals loves to endlessly experiment and it’s fantastic to roll out our first ever print single issues via our deal with Dark Horse Comics,” said Chip Mosher, Head of Content at comiXology. “We Have Demons has received an amazing response with comiXology Originals, so we wanted to try something different and make a splash with the lead title in this program. Next year, we’ll see more comiXology Originals titles from Snyder/Best Jackett Press, with comics created by Rafael Albuquerque, Jamal Igle, Jock, Tula Lotay, and Dan Panosian.”

Dark Horse will publish We Have Demons issue 1 on March 23, 2022. The We Have Demons trade paperback will be released on August 9, 2022 and is available for pre-order through Amazon, Barnes and Noble and your local comic shop.

Thomas Wayne Dons the Cowl in FLASHPOINT BEYOND