Directed and co-written by genre specialist James Cullen Bressack, the film tells of two witchcraft-practicing sisters (Madeleine Wade and Augie Duke) out to get revenge on their already dead father.

Madeleine Wade, who also stars in the film, co-wrote the screenplay.

Says Bressack, “We can’t wait for audiences to discover this unique, disturbing and very Disturbing film…”

The film, which will first play festivals through March, on digital April 9th.

Official synopsis: Two sisters who suffered abuse as children at the hands of their sadistic father decide, after his death, to use witchcraft to bring his spirit back to get revenge. 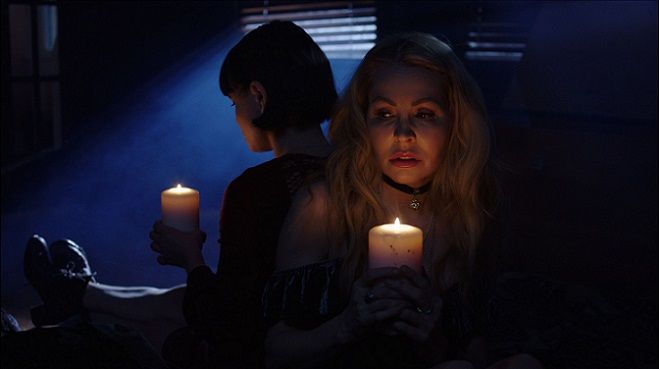 Run Time:
Rating: 5 out of 5 stars
Comments: Two sisters Grace and Serena reunite after their dad dies. Their dad was not a very nice one. He was abusive with the girls. Their mother was loving and she was more than just a mother.
Serena accepts what happened but Grace did not want to accept it. Now these two want vengeance on their dad. With a spell from their long dead mother they may have it. The pain these two suffered and still are is intense.  These two girls now Women are suffering so much and just want peace.
Their father really did mess up his daughter’s. He was deeply disturbed. You will not believe how deprived he was and how pure evil me treated his own flesh and blood.
The two sisters have a unique relationship developed by their dead father. Now with him brought back they have a chance at some well deserved revenge. He was and is one sick person. As the movie goes on we learn so much about this loving father, he was sick beyond belief. There is no way he can ever suffer enough.
This movie starts out disturbing and just goes way beyond that. There is such raw emotion in this movie.
You will feel so sorry for Grace. Serena turns out to be a precious part of Grace. Things really do take some unexpected twists and turns.
Grace and Serena do end up doing the right thing.
This movie will take you do a very dark place within yourself and than give you a ray of hope.