First Comics News: How did you and Bin Lee get together to work on “Delegates”?

Tina Cesa Ward : Bin and I both come from live action production and both used the same producer on our projects, Allison Vanore. She had mentioned to me that Bin was looking for a co-writer and I was really excited about the idea of working in comics and getting the opportunity to work in a genre I had been wanting to for some time. Bin and I met, we got on well, and then the rest is history.

1st: Can you tell us the storyline in “Delegates”?

Tina: The fictional African nation of Fulawodaabe. President Aminah Kokumo and her undercover African-American bodyguard, Marla Drake, are forced out of the capital when there is a coup. A secret is revealed about the nature of Aminah, as she flees to safety. And Marla, as well as other Aminah supporters along the way, are forced into deciding whether they still support Aminah once her secret is revealed. And not only support Aminah but also support the circumstances in which she’s been created.

1st: Why do you and Bin Lee switch off writing duties with each issue?

Tina: Beginning of each arc Bin and I would sit down for three weeks and work out the storylines for that arc, as well as what needs to happen in each issue. So once we had that done we would go off and write the issues. Writing an issue solo worked for us better than writing together. We always knew what was going into each issue but writing solo gave us a chance to also explore some things that didn’t come out in the brainstorming session. And doing every other issue kept us moving along pretty efficiently.

Tina: I think she has the ability to make you feel comforted and taken care of and at the same time she can decide that maybe your life isn’t as valuable as the big picture. It’s a fascinating combination. She also has the ability to learn from every action and every situation so her abilities to be a great leader is limitless.

1st: For you which character do you most like in “Delegates”?

Tina: It’s hard for me to chose, it’s like picking your favorite child. I don’t think that’s something you ever want to reveal.

Tina: Budget. It’s not the only difference but as an indie producer, the biggest advantage of writing comic books is that I can write whatever I want and not worry about if it’s physically or monetarily possible. It frees you up so creatively, it’s a wonderful thing.

1st: What is your comic “Guards of Dagmar” about? 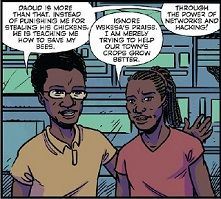 Tina: “It’s lunchtime. Stand guard.” Tom has given up his dreams to be a star chef and takes a job as a cafeteria cook in a residency for the developmentally and intellectually disabled. There he’s met by Daniel, a lifelong resident of Dagmar who witnessed the choking death of his friend during lunchtime. Daniel is convinced monsters killed his friend and now stands guard at lunchtime trying to prevent the same fate from happening to anyone else. Tom’s arrival and his insistence to change the residency’s menu has Daniel convinced Tom is actually a new guard sent to Dagmar to help protect them. And when Tom witnesses some unexplained events followed by the appearance of a mysterious woman, his skepticism about the monsters of Dagmar starts to turn to fear of the possibility Daniel may be right.

“Dagmar” started as a live-action series that I pitched around town that no one really understood, but I loved the story so much I wanted to get it out there and then perhaps I would go re-pitch with the comic in hand.

1st: Why did you get into writing comics?

Tina: I always had interest in comics and started years ago writing scripts for comic books as submission pieces, and then finally, with the digital age we now have our chance to get our work out into the world without gatekeepers. So here I am.

1st: Which super-hero would you most like to write a comic book about?

Tina: I’ve always had a love for Batgirl. But I would really have to find a story that has not yet been explored in order to take that on.

1st: Which superpower would you most like to have and why?

Tina: Probably flying. You could probably get places faster and to just be able to rise up above the noise seems like heaven.

Tina: If you’re interested in the independent theater scene and all the drama that goes on and off stage, this series is for you.

1st: What is next in your career?

Tina: Generally just hoping to get more opportunities to tell unique stories with unique characters whether that is on the web, tv or with comic books.

1st: Do you like to play or watch baseball?

Tina: Both. Although it’s hard to get a game of baseball together. However, I do have a game of catch with a friend whenever we can spare the time. Playing catch is actually a fun way to catch up with your friends.

1st: Any words to say to the fans of “Delegates”?

Tina: Thank you. Thank you. Without you, we’re nothing. Keep reading.