First Comics News: Why did you decide on using the game Rock, Paper, Scissors as the basis for a comic book?

Luanga: A year before I created this concept, a friend told me “everything in comic books has been done! It’s hard to be original…” and I never forgot his comment. The following year in 2015, I was at another friend’s home and I met his uncle from Mongolia. I don’t remember why, but we got into a Rock-Paper-Scissors battle (which I lost). When I went home, I realized just how popular and far-reaching Rock-Paper-Scissors was, yet I never saw anyone make this universally known game into a comic book series. Sure, some comics creators have made heroes and villains inspired by the game, but I never saw someone actually bring the game to life as anthropomorphic characters. I felt I had an original idea and I decided to just go with it and see what happens. Also, I’m a huge Teenage Mutant Ninja Turtles, Usagi Yojimbo, Flaming Carrot, and Milk and Cheese fanboy. I love those crazy original characters and stories and I wanted to follow in their footsteps.

1st: How would you describe the personal traits of the Rock, Paper, and Scissors characters?

Luanga: The main Scissor’s character is Norblade. She is the sister of the SAWIN (Sharpest Arsenal Weapon in Nation) – the ‘general’ of the Scissors army that invaded the Papers – and she is probably the best tactician in the Metallic Empire. Norblade is power-hungry and willing to do anything to overthrow her sister and the Metallic Empire’s Commander Slice. However, she is tactical and willing to use her loyal spies to play a long game.

The main Paper character is Teflord Jr. He is the son of King Teflord and the heir to the Flatopia throne. Teflord Jr. was originally an arrogant douchey prince who took his peaceful life for granted. After escaping the genocide of Flatopia with a small group of Paper soldiers, Teflord Jr. matured quickly and will become the type of leader his Papers need.

The main Rock character is Rocknar. He is a prodigy within the Rock army and the only recruit to master the highest level of Rock martial arts. Rocknar catches on quickly, knows when to show restraint, and can be a leader when needed – all for a rookie warrior.

1st: What is the world like where all these beings live?

Luanga: The planet Syferion is a barren desert planet that originally had no water or vegetation. Where the planet is located within the Milky Way is not yet revealed in the story. The only place where plants began to materialize is around the crash site of a ship called The Syferion. The Anvil Elders who emerged from the crashed ship distributed the various species around the planet.

1st: Is a Plastic made of plastic all throughout its body?

Luanga: The mysterious Plastics are indeed completely 100% ‘liquid’ plastic and they are capable of stretching their bodies and they can make limbs. In their normal state, they resemble ‘blobby’ worms and only create appendages when needed. Their kingdom, The Null Forest, is also made of pure plastic. They are one with their home.

1st: Besides Plastic, Rock, Paper, and Scissors are there any other races on this planet?

Luanga: The most powerful and ancient species on the planet are the Anvil Elder Gods of The Freelands. The Anvils control a legion of simple-minded Glue slaves who live to please their Anvil masters. The Glues are the only truly indestructible species on Syferion and can multiply at will.

The two farthest kingdoms consist of living Water and Sand. Both Water and Sand are mortal enemies who are equally matched. Their conflict was the first ‘elemental war’ and it took the Anvils to threaten their destruction for the fighting to cease.

1st: What is special about the Anvils?

Luanga: The four Anvil Elder Gods were the first inanimate objects to achieve sentience on the planet and they are the ones who set-up all the original kingdoms. The Anvils age very slowly but are not immortal. The Anvils know exactly how life began on the planet and where the crashed ship came from. They see themselves as deities and the guardians of the planet.

1st: Will we see Sand and Water beings and if so, how will they factor into the events going on?

Luanga: Both kingdoms are to be fully introduced in the final issue #4. Their conflict is separate from the 2nd Elemental War between Paper, Rock, Scissors, and Plastic. The Water and Sand conflict is a flashback that helps explain the motivations of the Anvils Elder Gods within the new war.

Once an ongoing Paper Rock Scissors N’ Stuff War series is launched in 2022, the Water and Sand kingdoms will be explored in greater detail and will eventually come into contact with the others.

1st: Why are all these various beings at war with each other?

Luanga: The current war started when the Scissors discovered the Paper kingdom and the decision was made by the SAWIN to attack. The conquest of Paper was so easy for Scissors that they believed the rest of the planet would fall under their control.

1st: How do the Scissors’ disembodied hands work?

Luanga: Issue #4 will explain why the Scissors have floating hands. They serve a point and the Anvils have a role in their creation.

1st: Which of the races in “Rock, Paper, Scissors N’ Stuff Wars” are you most like?

Luanga: As the creator of the story, I love them all. I really don’t have a favorite. Each species comes from a different space in my mind and I enjoy crafting the world they occupy.

1st: Will there be more of “Paper Rock, Scissors N’ Stuff Wars” in the future?

Luanga: With the Kickstarter for the final issue #4 in the limited series coming to a close, the goal right now is to have all four issues, and variants, printed – plus complete a compiled trade paperback. The trade paperback will be solicited to comic book distributors.

Hugh and I are discussing re-printing each issue in color. Hoping to see that happen soon once we get a colorist who can compliment Hugh’s artwork.

An ongoing series is being planned for 2022 and the hope is to offer the new series at comic book conventions next year and through distribution. Fingers crossed that conventions can make a comeback.

All copies of the comics will be available on my website www.handmadecardboardinnovations.com 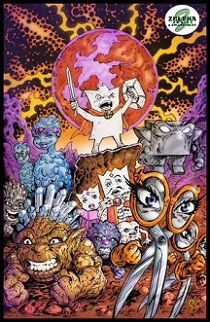 Luanga: Kickstarter is the best way to reach new and existing readers and fans with comic book conventions canceled due to the pandemic. Kickstarter helps small creators like me complete our stories and give fans rare exclusives as a thank you. I’m grateful Kickstarter is an option to cover the costs of producing new comics while comic cons are on hiatus. That being said, this will be my last crowdfunding campaign for a long while! Doing Kickstarters is a full-time second job and can get emotionally tiring. I will be happy to conclude the campaign and send everyone their tier perks. I can then concentrate on getting a cartoon series going.

I’m also grateful for my friends and connections in the comic industry who pitched in to offer their artistic skills for variant covers. From up-and-coming creators to indie legends, I am blessed to have so many variant covers to offer fans through this Kickstarter.

1st: How does it feel knowing you helped create such a unique and wonderful comic book?

Luanga: I am a lifelong comic book nerd! Ever since I got my first comic book in 1987, I have loved the medium and have dreamed of the day I could complete a series to call my own. I am blessed to have a professional in-demand artist like Hugh Rookwood making my stories come alive. This is just awesome! To be able to look at all four issues and know I completed the arch I wanted is priceless.

When I hear from people who read the issues and love the story, that just makes this journey so worthwhile. To know I have fans of the characters is great! I’ve heard from people who love the Papers or the Rocks and so on and it’s music to my ears. My creative insanity seems to be well-received lol.

1st: What would you like to say to all those who helped bring “Rock, Paper, Scissors N’ Stuff Wars” to life?

Luanga: I want to say thank you so much for believing in this comic book! My campaign is not about getting hundreds of backers – it’s about getting those select people who enjoy the premise and see the future potential in the series. So many people say comics can’t be original, but when faced with a new original concept, too many people hesitate or shy away. Those people who choose to take a chance, mean a lot to me and this series.

I have a saying, “opportunity comes to those who are willing to open their eyes to it and embrace the exciting fear of the new”. The people who back this comic will see dividends because I won’t give up until a Paper Rock Scissors N’ Stuff Wars cartoon and video game are made! I want your books to be a fun read + a future investment in the secondary market! Mark my words – your money is well spent!! With Hugh by my side, this series is only going to get bigger and better year after year!

https://www.firstcomicsnews.com/rich-interviews-luanga-lue-nuwame-creator-writer-letterer-for-rock-paper-scissors-n-stuff-wars/https://www.firstcomicsnews.com/wp-content/uploads/2020/09/Zelpha-Comics-and-Collectibles-600x257.pnghttps://www.firstcomicsnews.com/wp-content/uploads/2020/09/Zelpha-Comics-and-Collectibles-150x64.png2021-03-29T22:35:00-07:00Richard VasseurInterviewsRich Interviews
First Comics News: Why did you decide on using the game Rock, Paper, Scissors as the basis for a comic book? Luanga: A year before I created this concept, a friend told me “everything in comic books has been done! It’s hard to be original...” and I never forgot his comment. The...
Richard VasseurRichard.Vasseur@firstcomicsnews.comAuthorRichard Vasseur is a Canadian who has had a love of comic books his entire life. I started out as just a fan reading comics every chance I had. This evolved into writing reviews for a small newsletter which evolved into having my own column at Jazma Online and doing interviews. I also worked briefly as a columnist at Comic's Buyers Guide. Everyday I am involved with doing something comic book related and I love the hobby.First Comics News