First Comics News: What are some of the main differences between “Woe Is Oz” and the original Wizard of Oz?

Ethan Tarshish: Well I think the first thing most readers will notice is that it is a shift in tone from the original film/book (though maybe not so much so from “Return to Oz”). That is purposeful, just like the use of colors to elicit certain feelings and realms that we explore throughout the world of Oz. It is not so much a feeling of “well this book is so different or the same as the original” as much is it is taking the wonderful pieces that made the original such a masterpiece and hopefully captures and expands on that. The story takes the overarching elements of what is canon from the “Wizard of Oz” and “Return to Oz”, as well as the first book, and continues with a “what if” approach, so that we are now able to explore with a greater depth into some of these lesser-known characters that are just magnificent!

1st: Who are the four main characters?

Ethan: The short answer is that Dorothy, Tin Man, Scarecrow, and Lion are all along for the ride, without a doubt, and at least a few of them are there from the get-go. The longer answer is that this series is more episodic and allows for more individual character development, so we are really able to delve into a lot of characters that might be a bit lesser known, but I like to say that they are just characters that readers haven’t realized are their favorites yet. Some of these of these include Tic-Tok, General Jinjur, Ozma, H.M Wogglebug, and Shaggy Man, as well as some wholly new characters like Um, Ra, Rose, and Peter.

1st: For those who do not know who is Ozma?

Ethan: Well historically Princess Ozma is the ruler of the land of Oz, and just like most of those who reside in Oz, she appears to be immortal…but who knows…nothing is forever. I’ll just set there for now. Our Ozma is kind of going through some major transformations and some pretty huge crisis of conscience when we first meet her here. There are some pretty heavy decisions she’ll have to make, ones the likes of which she has never had to make before, it will really test her mettle as ruler.

1st: What type of adventures do Dorothy and her friends go on?

Ethan: “Journey” might be the more appropriate word to use here, and I don’t want to spoil any plot points, but each is kind of on their own personal journey that will leave them very emotionally and in some cases, very physically different then when they first started. One could argue that if Dorothy’s Journey in the “Wizard of Oz” was to find her way back home, in this tale, it may be her Journey to find her way through coping with great loss and to get a better understanding in terms of her grasp of reality. Each character is on a journey that will be very personal to them and which will definitely see them deviating quite a bit from that well-traveled yellow brick road.

1st: Will the ruby red slippers play a part in this comic?

Ethan: Here’s a fun fact about “public domain,” while it does allow creators a wide berth for creative license when it comes to beloved characters, there are some items within the world of Oz that are inherently not covered by this framework. Many of the fans correlate the ruby slippers as being synonymous with Dorothy and Oz, but in reality, they were not ruby in the original book, but instead of silver. They did not become that ruby color until MGM was introducing color (specifically technicolor) to an audience for the first time in film, and wanted a color that would really pop, hence ruby. Unfortunately though, because this was a later movie-specific add, just like the yellow brick road, it cannot be used in subsequent stories without a licensing agreement. That said, the silver shoes and a weathered “brick road” of sorts do indeed show up throughout the “Woe Is Oz” series, but as to how, you’ll have to keep reading to find out.

1st: What is the most frightening thing in Oz?

Ethan: What I am going to put these characters through. Ha, well there are certainly some things to fear within Oz, but I guess in terms of specific threats, there is a very real and fast-growing challenge to the kingdom, one that has been technically festering since the death of the Witch of the West, and is very soon coming home to roost.

Ethan: Right now it is a little frazzled. She came back from a magical place with no proof and is having a heck of a time trying to explain this to others without it sounding like she got hit a little too hard in the head. So, there is some inner doubt happening. If only there were some way to prove she isn’t crazy…

1st: Would “Woe Is Oz” make a great animated movie, why or why not?

Ethan: I mean, you are asking the creator, so naturally there is a bias here, but as a huge fan of the world of Oz itself, a huge comic fan and collector, and someone involved in the television and film industry, I will say that even though the series absolutely stands on its own as a comic series, it was always envisioned as something that could transition well to a truly epic and sprawling cinematic experience. Animated or live action, I think it would be a blast to see in all forms, and we have some amazing fans, so if there are any diehard’s out there that want to see this made, make your voices heard. Tell us, tell the studio’s, shout it to social media, let’s do this!

1st: Would you like to visit the land of Oz?

Ethan: Oh for sure, I would live there in a heartbeat. No matter how many tornadoes I throw myself into though, no dice…just hospital visits. For now I guess I’ll just have to settle for occasionally bursting into song for seemingly no reason throughout my daily routine just to give the appearance of significance…but here’s a life lesson, when a bunch of people all at once burst into song, it’s thrilling to behold, when just one guy does it, you spend the night in a jail cell for drunken and disorderly conduct.

1st: What is Tarshish Creative?

Ethan: It’s the umbrella company for all the creative endeavors that are brewing. It’s a bit of a catch-all in that comics may be produced under that title, but it is also a company that does consulting to create television taglines, campaigns, commercials, trailers, and more. If interested in seeing a sampling of what goes on there, head on over to ethantarshish.com

1st: Do you have fun going to comic conventions, do you take your family too?

Ethan: I love going to conventions! When my kids were little, they used to come to visit our booth. I started out as a huge comic fan before I made the jump to create a series of my own, so it is still pretty surreal to be on the other side of the table. I really enjoy our local Minnesota conventions (Spring-con, Fall-con, Convergence, and Mars Con stand out), but had a blast out in Chittenango, NY when the series was inducted into the “Oz Hall of Fame” during the “Oz-Stravaganza” convention. They had a parade for us and pulled out all the stops, it was a huge honor and such an amazing time. Other than that, San Diego Comic-Con is always an incredible time with so many wonderful people. But the kids are still a bit little yet to come along for any conventions that require traveling…maybe someday.

1st: What other comic books are you working on or will be in the future?

Ethan: There is actually a brand new Shlocky horror series that is being worked on as we speak called “Parasightmare”. Kelly did the art and illustrations for the concept designs and an animated trailer (both are absolutely stunning in classic Kelly fashion), and even though it’s a little too early to go too deep into the details, I can say it is a huge love letter to the 1980’s (if “Stranger Things” is “Aliens”, this series is “Critters” or “Attack of the Killer Tomatoes” meets “Adventures in Babysitting”). It is currently scripted to be a seven issue mini-series and is co-created by the very talented Ben Cochran. If all goes according to plan, seven issues will be just the start. You’ll want to “like” @tarshishcreative on facebook for updates as they become available.

1st: How do you spend your non comic hours?

Ethan: The same way I spend my comic hours Richard, trying to take over the world

1st: Would you like to say anything to the fans of “Woe Is Oz”?

Ethan: Well, first of all, I want to give them a huge thank you! Thank you for being supportive of our series all these years, thank you for being patient, and thank you for believing in our vision. Kelly and I realize it’s been a while between issues, but I promise, it’s well worth the wait. Kelly tells me that issue #5 is fully penciled out, and we’re hoping to have out on shelves soon! As a special thank you, we have also included a “never before seen” special preview of a page from that issue. Great things ahead, we are very excited! 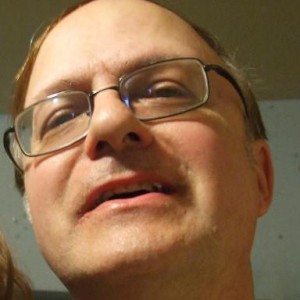 Richard Vasseur is a Canadian who has had a love of comic books his entire life. I started out as just a fan reading comics every chance I had. This evolved into writing reviews for a small newsletter which evolved into having my own column at Jazma Online and doing interviews. I also worked briefly as a columnist at Comic's Buyers Guide. Everyday I am involved with doing something comic book related and I love the hobby.