First Comics News: Do you see yourself in the characters you create?

Carlos Raphael: I see the young me in the characters I gave birth to in my head. Many of the characters in my “universe” have been around for 35 years. Metalmorph is one of those. He is hard-headed, opinionated, and cocky. That was me in my teens and early twenties. It’s those qualities that gets him in trouble early on with Power Company and especially FiveStar. For some reason, he makes a closer connection with Forecast. 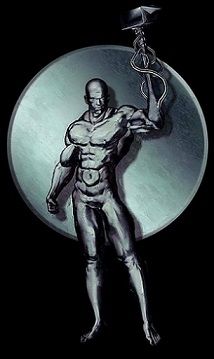 1st: Who is Metalmorph and what are his powers and abilities?

Carlos: Metalmorph is the oldest of three brothers. They are royalty on their homeworld of Jantis. A coup within their family, led by their ruthless uncle Rankor, who overthrows the monarchy and Metalmorph’s family, known in my universe as the Royal Breed, including his brothers T’yr (Apex), Ra’el (Impetus), cousin Volta, and faithful court administrator Ohm (who just happens to be a radio-wave board rider who can translate countless languages), and driven from their home to earth, where they are now assimilated as humans, and kicking ass as universal protectors! Little do they know that Rankor and an armada of Jantisian are hot on their trail and marked for assassination! More will be revealed in Royal Breed #1, expected at the end of the year.

Rich: Why is Metalmorph liked so much?

Carlos: Because people confuse him for Silver Surfer and everyone loves the Surfer! Seriously, he does have his light side, but so far only Forecast and Power Company fans can seem to tolerate him. These the muscle of PC. He’s the brute force. He’s immensely strong, as his skin can meld and shape, and go from liquid metal to titanium strong in the speed of thought. He is formidable.

1st: What villains did you contribute to the story in “Power Company”?

Carlos: The Necromage is the darkest soul in the whole Coalition Comics world. He is even darker than Cyborilla. Cybo sees himself as being “in the right “ in his head and heart, and Necromage is just loath for humanity in his head. He is a warlock, and his father is the head of one of the world’s largest religions (Mosai Faith), and he detested his father and turned to the dark arts as a way of damning his father’s soul forever. He’s a bad dude. He has his reasons for being a part of Damage, Inc. Sebek the Medjai is Necromage’s, right-hand man. Created by original partner Joe Davis, Sebek is a fellow Egyptian, a follower of Mosai, an archaeologist, thief, and magician. These two combine to make for a hateful and aggressive dynamic duo, and Power Company pays for crossing their paths.

1st: Why should super-heroes be afraid of Sebek and Necromage?

Carlos: Two words…NO CONSCIENCE. Either will take a life if it fits their needs, they don’t have a place for mercy in their heart, except…a thaw in that heart by Necromage Orin Ka when aimed at Priestess Danielle? Hmm…I don’t know? People need to read PC #2, due in October 2018.

1st: How were Necromage and Sebek created?

Carlos: Necromage as the Black Master by a 13-year-old in Oak Harbor, Washington in 1982, as a member of “MY” Legion of Doom. They were called the Tribunal of Evil and featured Psiclone and Rankor. They fought my Super Legion. They were my analogs for the Avengers or Justice League. The character of Sebek was created solely by Joe Davis. Sebek’s background history by me while co-writing Power Company #1. He needed a history for the official handbook. I’m actually really proud of him now. I think his story really flowed nicely and tied into Necromage Orin seamlessly. 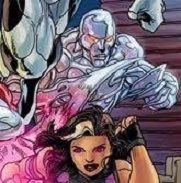 1st: Will Metalmorph have his own comic book anytime soon?

Carlos: Metalmorph will always be part of a team. If ever the demand for a solo mini-series, then I’d love to go down that path, but for the time being, his comic book “life” will be tied to Power Company and then Champion Comics’ The Royal Breed.

1st: What is Champion Comics and why should people care?

Carlos: Champion Comics is my brand. My label. It’s been in existence since 1984. At that time, my brother Ernesto and I used to make Comics for the local kids. We write, draw, and color these comics made from folded, stapled typing paper. We’d buy a ream, then split it (when my brother wasn’t stealing my paper). We’d create these original stories with original characters (many of whom still exist and make appearances in recent Champion Comic releases), and just pass them out, or keep them for ourselves. At that time, we called it 3 Brothers Comics (My youngest brother Mando was loosely involved). A few years went by and we had a brotherly spat, and my brother “left” 3 Brothers, and started making Comics under the ACE Comics label. So I was left having to change the name from 3 Brothers since it was just me working on comics now. I decided on Champion Comics, and anything I’ve created since has been under that flag. Countless personal comics, ashcans in the 90’s while working with current superstar artist Jason Metcalf (The Darkness, Clash of the Titans, Eternal Descent), and then most recently with the release of my American Revere comics.

1st: Who is American Revere?

Carlos: He’s my flagship character. The first one to get an official release (I don’t consider the ashcans official). I’ve released American Revere Comic-Con Promo #1 (2011), and American Revere: Great World Hope #0 (2013). Coming in September 2018 is American Revere: Super Max #1. It’s light years better than its predecessors. The art by Ambet Gregorio is both gorgeous and over the top hyper realistic!

1st: How would Metalmorph fare against Black Death in a fight?

Carlos: Metalmorph is a quick 20-second win, but for those first 20 seconds, Black Death would make his presence known to Metalmorph. He’d feel the shots.

1st: How do you motivate yourself to create comics?

Carlos: Lately? It’s been watching my colleagues and partners in Coalition Comics coming out with such awesome books. Have you seen FiveStar? Or Rodney Lockett’s Guardians of Creation? Roy Johnson’s The Sentinels, or Eric Bennett’s Steel Wolf? It’s all inspiring, high quality, and exciting. That motivates me. That gets my blood pumping.

1st: What would you do with Metalmorph’s powers?

Carlos: Solve world peace one ass kicking at a time.

1st: Have you gone to any conventions if so what do you think of them?

Carlos: I’ve been attending conventions since 1987. That was my first. San Francisco Con. Mike Mignola, Arthur Adams, and Ann Nocenti were the guests of honor. Back then, there were no celebrity zone and artist alley and the guest section. Everyone was on one floor with the vendors, the guests usually by the lobby entrance, and the vendors and indie artists near the show entrance. Since then, it’s been literally 100 shows. Large and small. The last one I did was Wizard World Portland. I shared a table with fellow Coalition Comics partner Rodney Lockett and Iron Gate Comics.

1st: What would you like to say to those who pick up your comics?

Carlos: POWER ON!!! That’s what Forecast coined, and I shout it to anyone who wants to experience Power Company. It’s a throwback. Intentionally. Making Comics Fun Again. Buckle up, get excited, and let’s meet some crazy characters in a world gone crazy.

https://www.firstcomicsnews.com/rich-interviews-carlos-raphael-creator-writer-metalmorph-sebek-necromage-co-creator-power-company/https://www.firstcomicsnews.com/wp-content/uploads/2018/03/Power-Company-logo-600x257.pnghttps://www.firstcomicsnews.com/wp-content/uploads/2018/03/Power-Company-logo-150x64.png2018-03-20T16:26:54-07:00Richard VasseurInterviewsRich Interviews
First Comics News: Do you see yourself in the characters you create?  Carlos Raphael: I see the young me in the characters I gave birth to in my head. Many of the characters in my “universe” have been around for 35 years. Metalmorph is one of those. He is hard-headed, opinionated, and...
Richard VasseurRichard.Vasseur@firstcomicsnews.comAuthorRichard Vasseur is a Canadian who has had a love of comic books his entire life. I started out as just a fan reading comics every chance I had. This evolved into writing reviews for a small newsletter which evolved into having my own column at Jazma Online and doing interviews. I also worked briefly as a columnist at Comic's Buyers Guide. Everyday I am involved with doing something comic book related and I love the hobby.First Comics News