Lucha Vavoom is a fixture in Sothern California for almost 20 years. It is a mixture of Lucha, Mexican Style Wrestling, burlesque and stand up comedy. It’s kind of something for everyone but not a mixture you would expect.

I had never been to Lucha Vavoom before but I had been in the ring crew for the late Jon Ian’s Mach 1 Wrestling and David Marquez’ Championship Wrestling from Hollywood. Jon was a family friend. So I knew a bunch of the local So Cal Indie Wrestlers but it had been about a decade since Jon Closed Mach 1.

I got a phone call asking if I would like to cover the Lucha Vavoom event. Now I have watched Lucha on TV but I don’t speak a word of Spanish. Without understanding the commentary it’s still fun to watch because some of the movies seem impossible, but I have never been to a live Lucha Libre event.

At Lucha Vavoom I got a burlesque show. Drew Carey performing comedy and commentary, a rock band, a bunch of guys in spandex that I grew up hanging around on a weekly basis. And I was asked to go this free of charge, skip the line, and be the first person to enter, as long as I took pictures? Life is weird.

I don’t know how I had passed up going to this show before this. Mostly I think it might have been because I don’t speak Spanish and wasn’t sure what to expect.

The Mucic was from the Starcrawler, vocalist Arrow de Wilde, guitarist/vocalist Henri Cash, bassist Tim Franco, and drummer Austin Smith. It was a good punk band I hadn’t been listening to before. You can see a studio video below.

The fans had a lot of energy and were into the show the entire night and often on their feet, the crowd participation made the event more exciting and entertaining.

I went to the Thursday show, as I said Drew Carey did commentary and comedy. Drew’s performance alone would have been worth the price of admission. The wrestling matches included the Sexi Mexi’s, El Mariachi Loco, Lil Cholo, and the Crazy Chickens, Microman and Chamuel. Also featured were Joey Ryan and Willie Mack who I have known from my Mach 1/Championship Wrestling from Hollywood Days.

If you don’t know who Joey Ryan is, he is famous for using his dick to flip other wrestlers. He is the self-proclaimed king of “Dong Style”, this video explains it all…

In between the matches was burlesque from Miss Miranda, Trixie Little, Veronica Yune, Miss Tosh and Brynn Route. They put on quite a performance and really keep the crowd up.

My photos of the show below…

I have to say I had a great time and if you are in the LA area this is a must go! Take your friends, or take a date have a great time! It’s the best variety show in LA!

They will be back on May 1-2 you definitely do not miss this show. 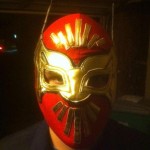