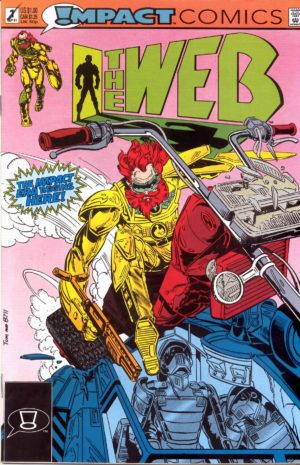 Continuing my reviews on the various Impact Comics titles, this week I’ll take a look at The Web # 1 which takes the concept of the classic Archie Comics character and reimagines it as a group of highly-skilled secret agents wearing high-tech armor and keeping the peace where the police and other law enforcement can’t.

The moment you began reading this comic, the story takes off like a runaway and I feel that’s too bad as it doesn’t give us a chance to get comfortable or familiar with the heroes of this series nor let us in on the full scope of the plot as it leaves us no choice but to fill in the blanks as we get through the action sequences (It involves Web agent Rothco breaking up a bank robbery by an army of thieves); The story also involves a young boy who runs away from home and witnesses Rothco go into action, but that element of the story doesn’t show up until the very end which is very odd but then again, this whole series comes off like a subpar straight-to-video spy movie from the late 1980s so that’s not a good sign for a series that’s ready to establish itself as an exciting superhero comic to an audience that wants something new.

This series lives by the “If it isn’t broke, don’t fix it” ethic as the fans who were getting into these Impact titles might have preferred the classic superhero factor rather than some weird spy thriller that might attract a small audience. Either way, The Web is not Len Strazewski’s best work, mainly because this concept feels like the brainchild of an overzealous editor rather than a proposal by Strazewski himself so it looks like he had to work it in the direction he was given, only thing is he did give it all he had and that’s not a bad thing but also not a good thing if anyone read this issue. Tom Artis and Bill Wray did a good job with the artwork and that’s all this series has going for it so kudos to them.

While some people may have given this comic a hard pass back in 1991 (Can’t blame them for that), The Web could have worked as a revamped superhero series, but this version looks like it needed more work. But in the case of The Web…unfortunately, what you see is what you get.

Well, that’s it for me. Thanks for sticking around and I will see you all next time with another Impact Comics review.