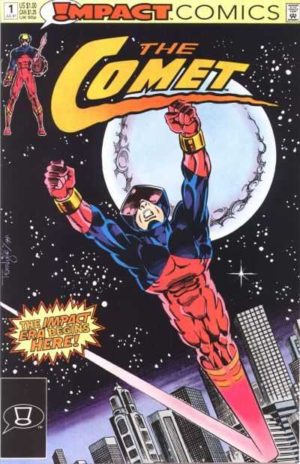 I continue my reviews of every Impact Comics title by taking a look at The Comet # 1 this week.
After stopping a group of thieves called The Techno Geeks was trying to steal a video game (Yes, a video game!!) I’m not making this up!) is where the vintage superhero element comes into play as it’s a perfect setup to introduce the readers to The Comet. We also get to explore his origin as Rob Conners meets his parents at a research base in Alaska only to find out they disappeared. but when he gets caught between an exploding generator and an antenna he develops superpowers and it isn’t long before he sets out to become a hero.
A major plot thread that comes to light is Rob’s girlfriend, Victoria Johnson, a local news reporter is being stalked by a serial killer named Applejack (A weird name for a serial killer) which I feel is a plot thread that will be wrapped up in a few issues but it basically takes over most of the issue and for the most part is not as impactful as the opening sequence. Tom Lyle is a magnificent artist who has such an amazing range in his art from making the action leap off the page to the more dramatic moments, but his plotting could have been stronger. Fortunately, he had Mark Waid by his side who manages to make Lyle’s plot more enjoyable with his scripting and because of it, the story is indeed a strong effort while at the same time helping cement Waid’s status as a master storyteller.
While the first issue wasn’t as strong as the other titles from the Impact Comics line that were launched during that time, The Comet is another great hero from the Archie Comics line that will amaze readers with his adventures, but the first issue in his new series could have been a classic due to the plot but since it was Tom Lyle’s first-ever writing assignment, it’s okay to cut him some slack as he was finding The Comet’s voice; Otherwise, if you enjoy the Impact titles then you might want to give The Comet a try, and that’s for the sole purpose of witnessing two comic legends in Tom Lyle and Mark Waid give a classic hero new life in the 90s.
Well, that’s it for me this week. Thanks for sticking around and I will be back with another Impact Comics review.