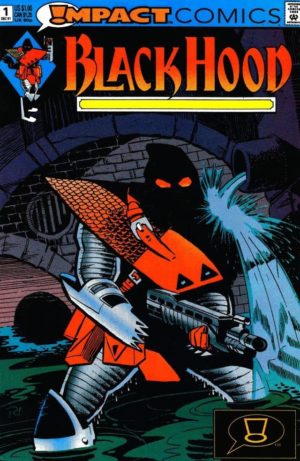 In this week’s installment of Review Corner, I’ll take a look at The Black Hood from Impact Comics.
This issue opens up with Wayne Sidmonson, who’s on a quest for justice that takes him to Seaside City where he gets a lead on a local criminal leader named Pirate Blue, who he needs in order to take down the mob that’s infesting Seaside City. But once he tracks her down, things escalate real quick as The Black Hood gets killed by a gunshot, and his spirit is taken to some sort of limbo where it meets some of the past wearers. of The Black Hood mantle. The book’s other subplot involves the creators of
“American Crusaders” comic discussing the fate of the Black Witch, the team’s only female member.
First off, after reading this comic I can say that it’s like taking the concept of The Punisher and mixing it together with a Charles Bronson movie along with some other action movie cliches to make something look cool and edgy but I felt it’s a complete mess as I like the Black Hood’s quest for vengeance but the entire plot comes off as convoluted because from the looks of things, Mark Wheatley probably had exactly one hour to finish his script in order to meet his deadline, which is such a shame because this was a series that could have brought in some Punisher fans but this issue alone would just chase them away. Rick Burchett’s artwork seems to follow a trend that the other Impact titles were going for in terms of going for an animated feel to the art. I guess giving every title on this line their own identity wasn’t a priority. The “American Crusaders” sequence was a great fourth-wall-breaking concept that was fun to help the book seem more upbeat but I felt so out of place.
The series picked up a few issues later with someone else taking on the mantle of The Black Hood but this first issue didn’t help matters at all and just goes to show you that a character like Black Hood may have thrived beyond the Impact Comics line….it just needed an amazing concept to open up with because, without that, a series like this will never get a fair shake.
Well, that’s it for me. I will be winding down on the Impact reviews next week with “Mighty Crusaders” and I might take a look at the final issue of the series so be on the lookout for that. Thanks, for sticking around and I will see you all next time.