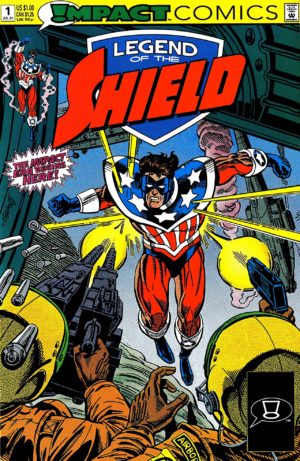 This week, I’ll take a look at Legend Of The Shield # 1, where The Mighty Crusaders characters enjoyed a brief stay at DC Comics via the publisher’s Impact Comics imprint in the early 1990s which started out with such promise but ultimately fizzled out in due time, but this premier issue of “Legend Of The Shield” kicked off the Impact Comics era to such great fanfare. This issue, we meet Sgt. Joe Higgins, who’s been chosen to wear the government latest weapon, Project: Shield, an armor that’s bulletproof and super-resilient and Higgins uses it as a force of good, even if he’s at the mercy of the army and the head of the project- General Marion Higgins, Joe’s own father! Higgins soon finds himself facing a difficult challenge by facing off against a threat called Mann-X.

The action displayed in this issue is top-notch but it takes the story off its rails if anything it helps keep it energized all while giving out that “Saturday Morning Cartoon” feel to it. The character’s military background is fleshed out that keeps the spirit of the original series alive all while charting out this new chapter in the life of The Shield. Grant Miehn and Mark Waid bring to the table an old-school form of storytelling that suits this series but it also gives Mighty Crusaders fans something to anticipate. Legend Of The Shield may feel like Captain America repackaged for the 90s, but it does take this iconic figure and lets him shine for a new era, one that fans will appreciate.

Well, that’s it for me this week, Thanks for sticking around and I will see you all next time.