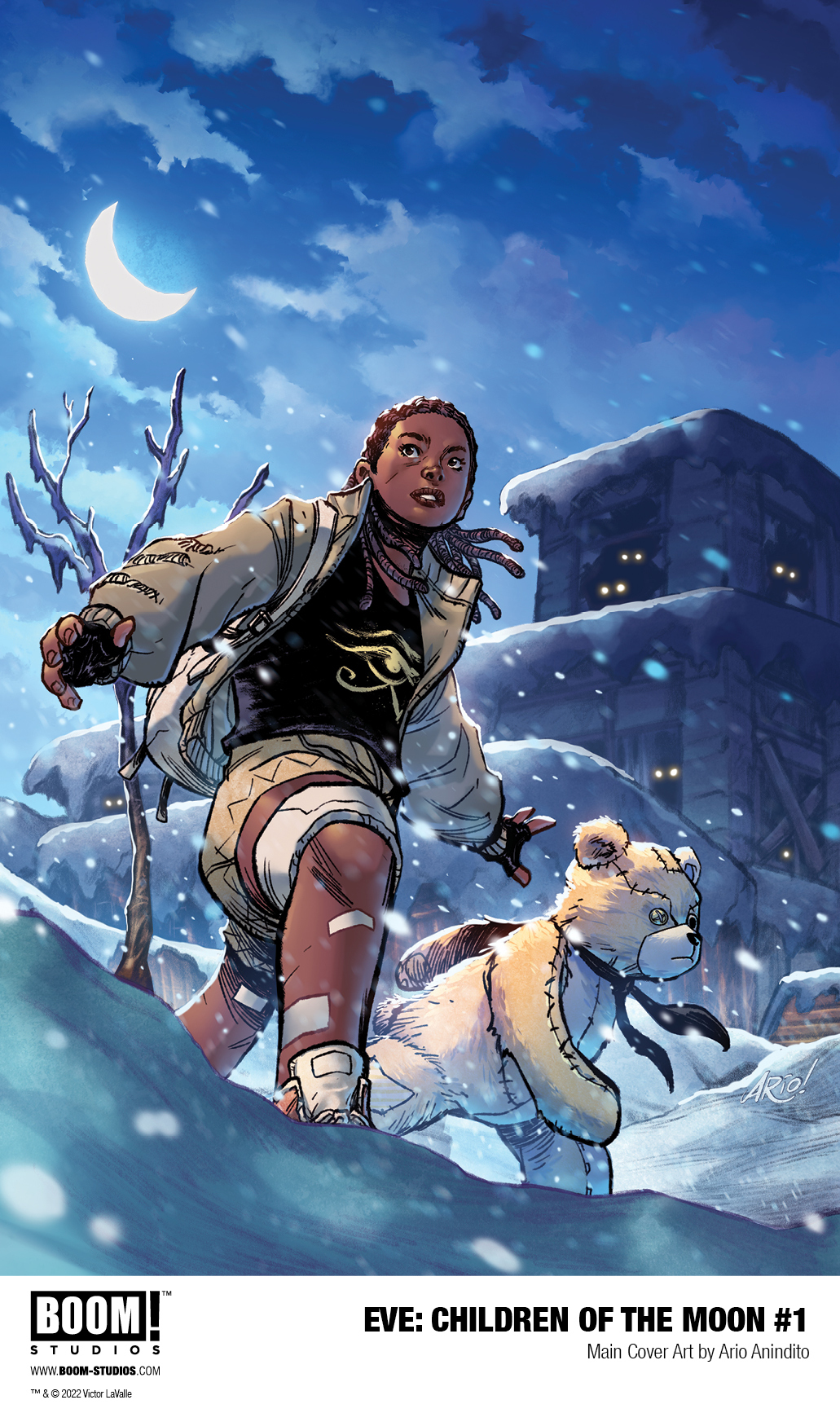 The long-awaited return of the best-selling sci-fi adventure is finally here! Eve seemingly saved the world once already, embarking on a perilous quest to protect what remained of humanity after a deadly virus outbreak… but the story doesn’t end there! Eve, Eve’s sister, and Wexler face new challenges, and a darkness from the past.

Victor LaValle is the author of seven works of fiction including The Ballad of Black Tom, which was a finalist for a Nebula Award, a Hugo Award, a Bram Stoker Award, and the Theodore Sturgeon Award. His latest novel, The Changeling, was released in June 2017. His other books have won the American Book Award, the Shirley Jackson Award, a Guggenheim Fellowship, and the Key to Southeast Queens. LaValle is also the writer and creator of the acclaimed comic book series Eve andVictor LaValle’s Destroyer with BOOM! Studios. He teaches at Columbia University and lives in New York City with his wife and kids.

“When EVE came out I didn’t know if readers would love her and her journey as much as I did. It was a gift when they embraced her as much as they did. And when we were done with issue #5, I realized there was more of her story to tell. But not just hers. The whole world we’d built,” said LaValle. “Eve saved the world but what happens the day after that? What if the world doesn’t take too kindly to saviors?”

Jo Mi-Gyeong is a comic artist and illustrator based out of Seoul, Korea, best known for her work on Victor LaValle’s Eve and Jim Henson’s The Dark Crystal: Age of Resistance for BOOM! Studios and the original comic book series Beastlands.

“CHILDREN OF THE MOON is an exciting story that’s completely new while still having strong connections to EVE’s previous adventures,” said Mi-Gyeong. “I’m very excited to go on this journey with Eve, who has grown up, and to show you all the new faces, as well as the various worlds of Eve that we haven’t shown yet!”

“The story of the end of the world isn’t over yet! Victor and Jo are back to explore newfound corners of the world that Eve and her friends have inherited from previous generations, and discover how they’ll save the planet from newfound dangers with familiar faces and brand new characters,” said Elizabeth Brei, Editor, BOOM! Studios.

EVE: CHILDREN OF THE MOON is the newest release from BOOM! Studios’ eponymous imprint, home to critically acclaimed original series, including BRZRKR by Keanu Reeves, Matt Kindt, and Ron Garney; Something is Killing the Children by James Tynion IV and Werther Dell’Edera; Once & Future by Kieron Gillen and Dan Mora; We Only Find Them When They’re Dead by Al Ewing and Simone Di Meo; Seven Secrets by Tom Taylor and Daniele Di Nicuolo; The Many Deaths of Laila Starr by Ram V and Filipe Andrade; Eve by Victor LaValle and Jo Mi-Gyeong; Basilisk by Cullen Bunn and Jonas Scharf; Faithless by Brian Azzarello and Maria Llovet; Alice Ever After by Dan Panosian and Giorgio Spalletta; Grim by Stephanie Phillips and Flaviano, and the upcoming series Briar by Christopher Cantwell and Germán García and Stuff of Nightmares by R.L. Stine and A.L. Kaplan. The imprint also publishes popular licensed properties, including Dune: House Atreides from Brian Herbert, Kevin J. Anderson, and Dev Pramanik; Mighty Morphin and Power Rangers from Ryan Parrott, Mat Groom, Moises Hidalgo, and Marco Renna; and Magic from Jed McKay and Ig Guara.

Print copies of EVE: CHILDREN OF THE MOON #1 will be available for sale in October 2022 exclusively at local comic book shops (use comicshoplocator.com to find the nearest one) or at the BOOM! Studios webstore. Digital copies can be purchased from content providers, including comiXology, iBooks, Google Play, and Kindle. 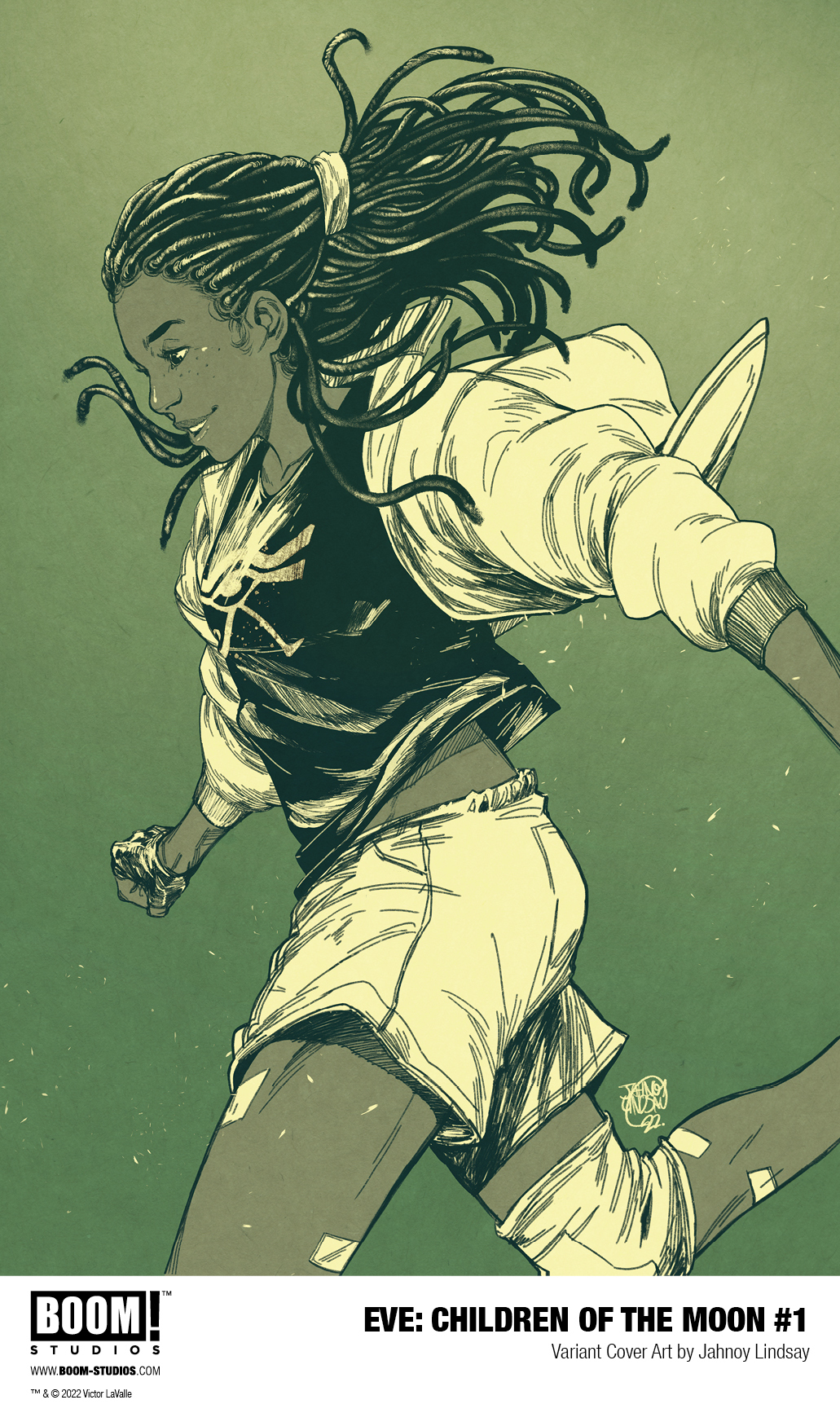 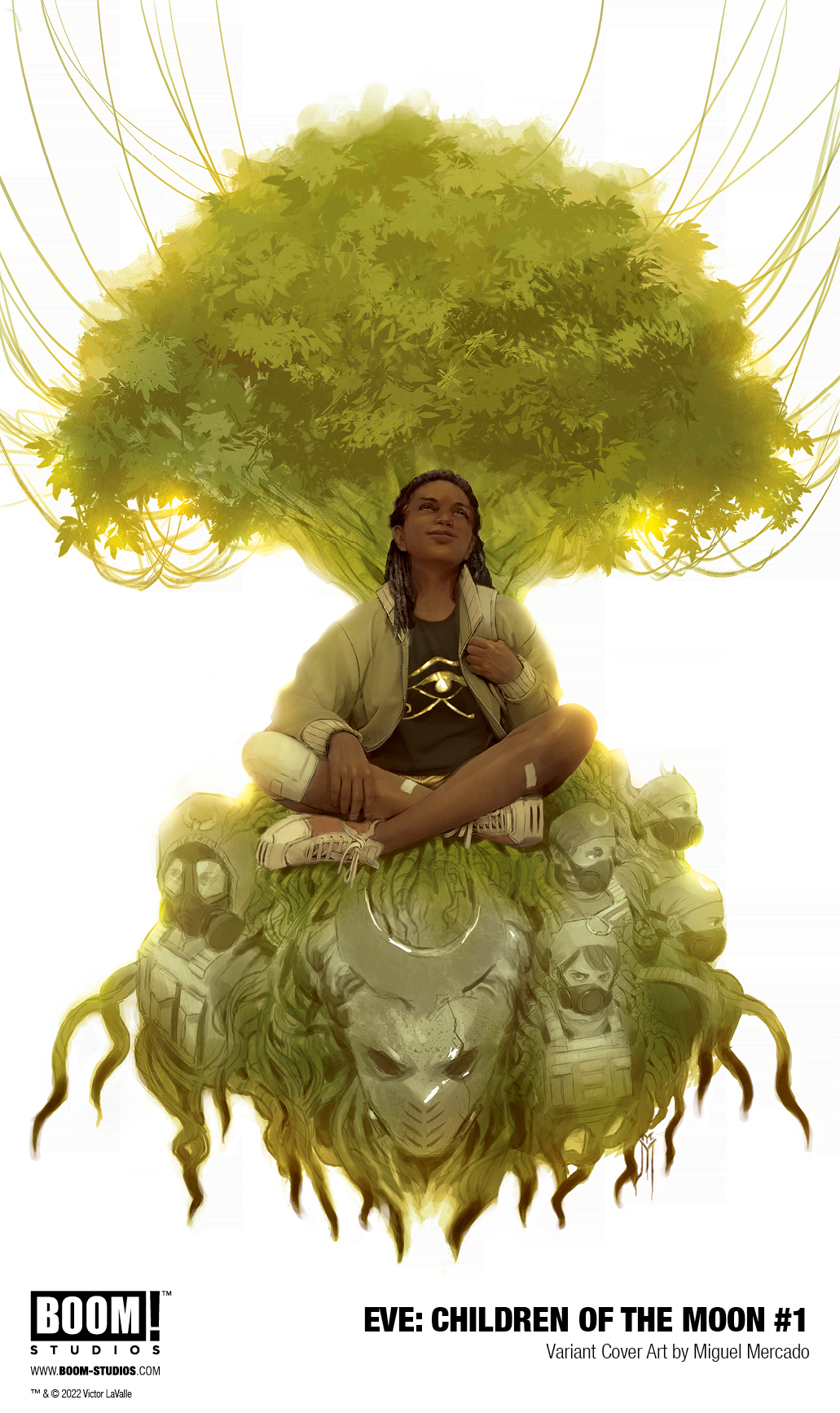 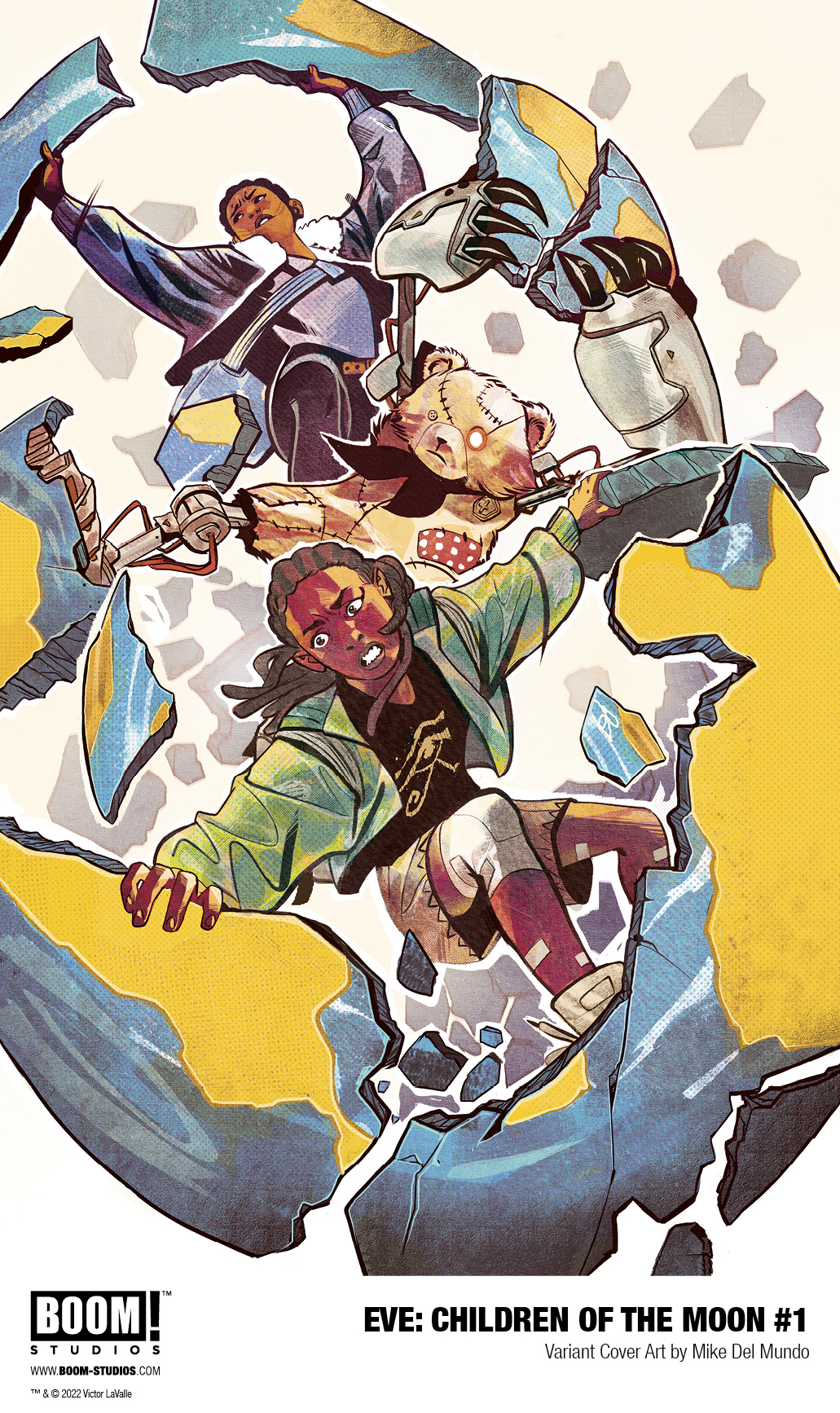 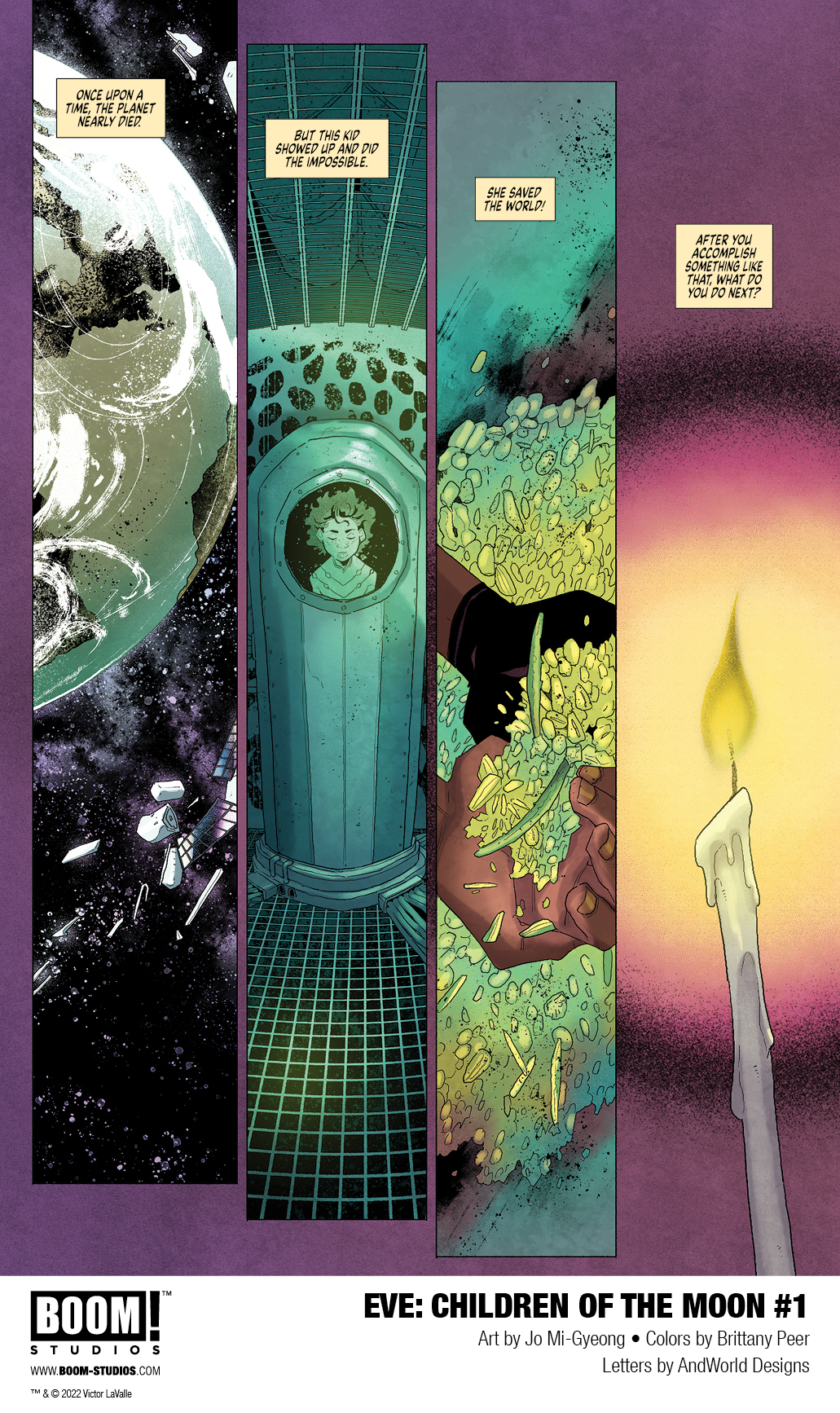 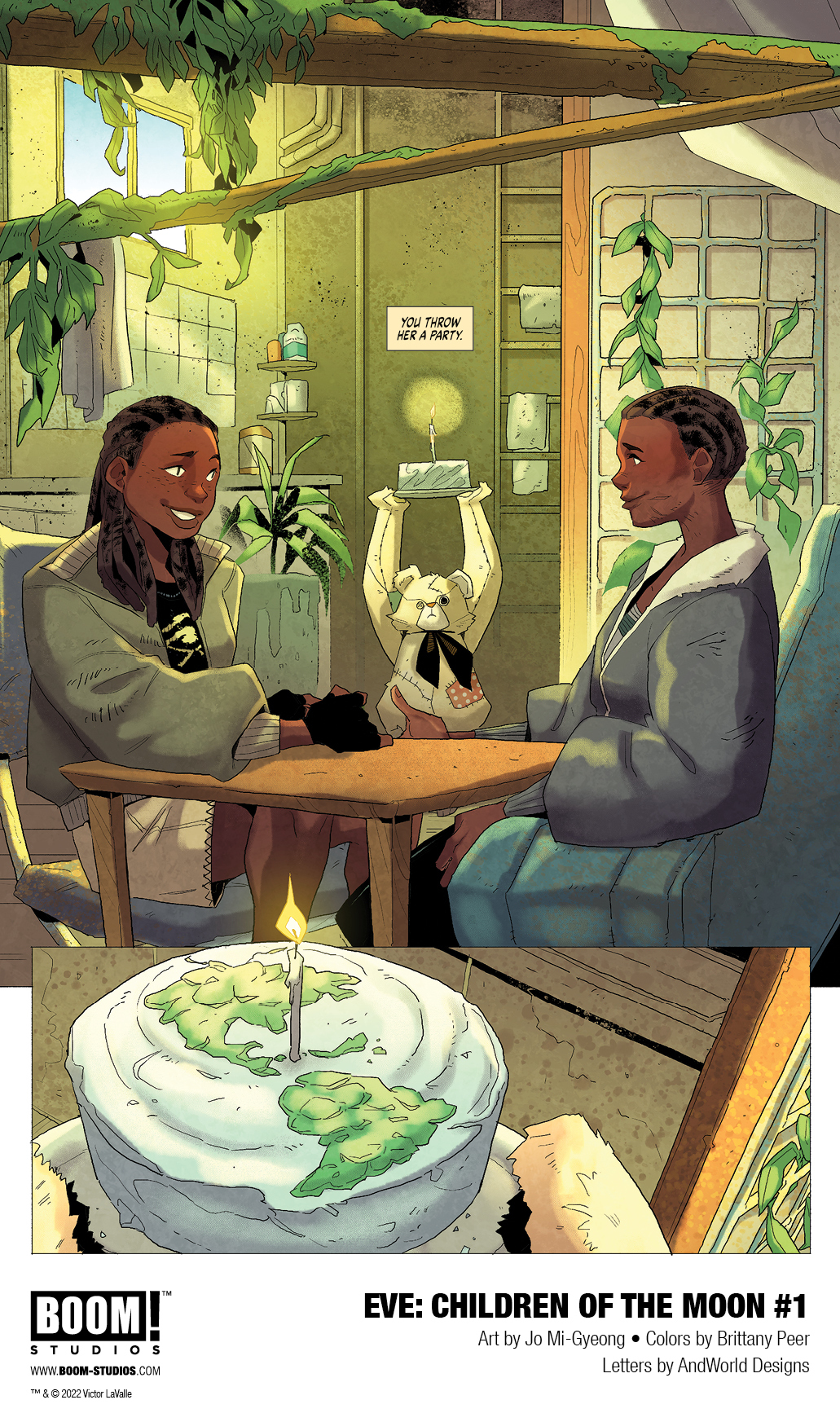