You can get a copy HERE 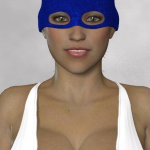 A comic book fan for approximately 50 years who has even had a few things published over that time.