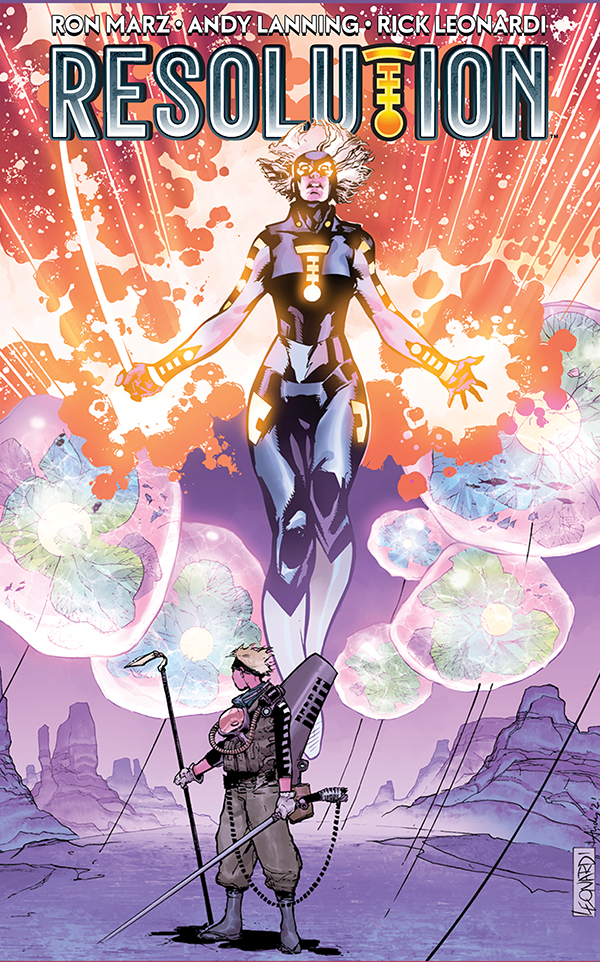 Los, Angeles, CA (June 28, 2021) – Today sees the third crowdfunding campaign to launch on Zoop. RESOLUTION is a new cosmic saga from legends Ron Marz, Andy Lanning, and Rick Leonardi. The campaign has a goal of $25,000.

Andy, Rick, and Ron want to take the opportunity to make the graphic novel’s creative process as inclusive as possible. While stopping short of any spoilers that would impact the enjoyment of the completed story, the creation of the pages will be shared whenever possible. Supporters can be involved as the graphic novel takes shape, including opportunities for input or even being drawn into the book!

The entire process will be documented in the RESOLUTION COMPANION book, a 48-page comic-size volume that chronicles the complete creation of the graphic novel. The COMPANION will provide a rare, behind-the-scenes glimpse at all stages of the story’s evolution, from script to layouts, pencils, inks, color, and lettering. Featuring extensive commentary from Ron Marz, Andy Lanning, and Rick Leonardi, the RESOLUTION COMPANION is perfect for process junkies, aspiring creators, and fans of superior storytelling.

You can find the campaign here as well as additional images to use in your coverage.

If you’d like to set up an interview with the RESOLUTION creative team or Zoop founders, please send an email to hello@wearzoop.com.

Ron Marz, Andy Lanning, and Rick Leonardi have produced epic stories spanning the Marvel and DC Universes, and even a galaxy far, far away. Now they’re joining forces to create their own cosmic playground, populating it with compelling characters and intriguing situations. Zoop’s comic-centric platform allows them to maintain full ownership of their property, while allowing readers to be integral to the creation of the story. With your help, we can make it a reality!

RESOLUTION is the tale of Xaan Maddox, a legendary member of the outer-space corps of heroes known as The Resolute. Now retired, Xaan Maddox has withdrawn to a remote world in solitude. Having quit THE RESOLUTE to live out her retirement on a remote world, she tends floating gravity seas, harvesting fish to scratch out a living. It’s the simple, solitary life she wants.

But former comrades arrive and attempt to recruit her to again don the exo-suit, so they can bring to justice an alien warlord who is Xaan’s former arch-nemesis. What follows forces Xaan to confront her own past, and places the entire universe in deadly peril.THE RESOLUTE is a cosmic peacekeeping force, with members recruited from a vast array of worlds, administered by mysterious alien species known as THE HILT. Agents of the RESOLUTE are called BLADES.

Once recruited, young cadets undergo The Process, during which they are bonded with an exo-suit, fitted with skin-jacks embedded at the base of the neck, spine, wrists, and ankles. The exo-suit becomes part of each recruit, remaining bonded for life. The exo-suit can be summoned at will, generated by the skin-jacks.

The suits transmute cosmic energy called Dark Matter, granting the ability to survive the vacuum of space, super-strength and resilience, and the ability to generate energy weapons and blasts. BLADES have protected the universe time and time again. Xaan Maddox was the greatest of them. Perhaps she will be again…