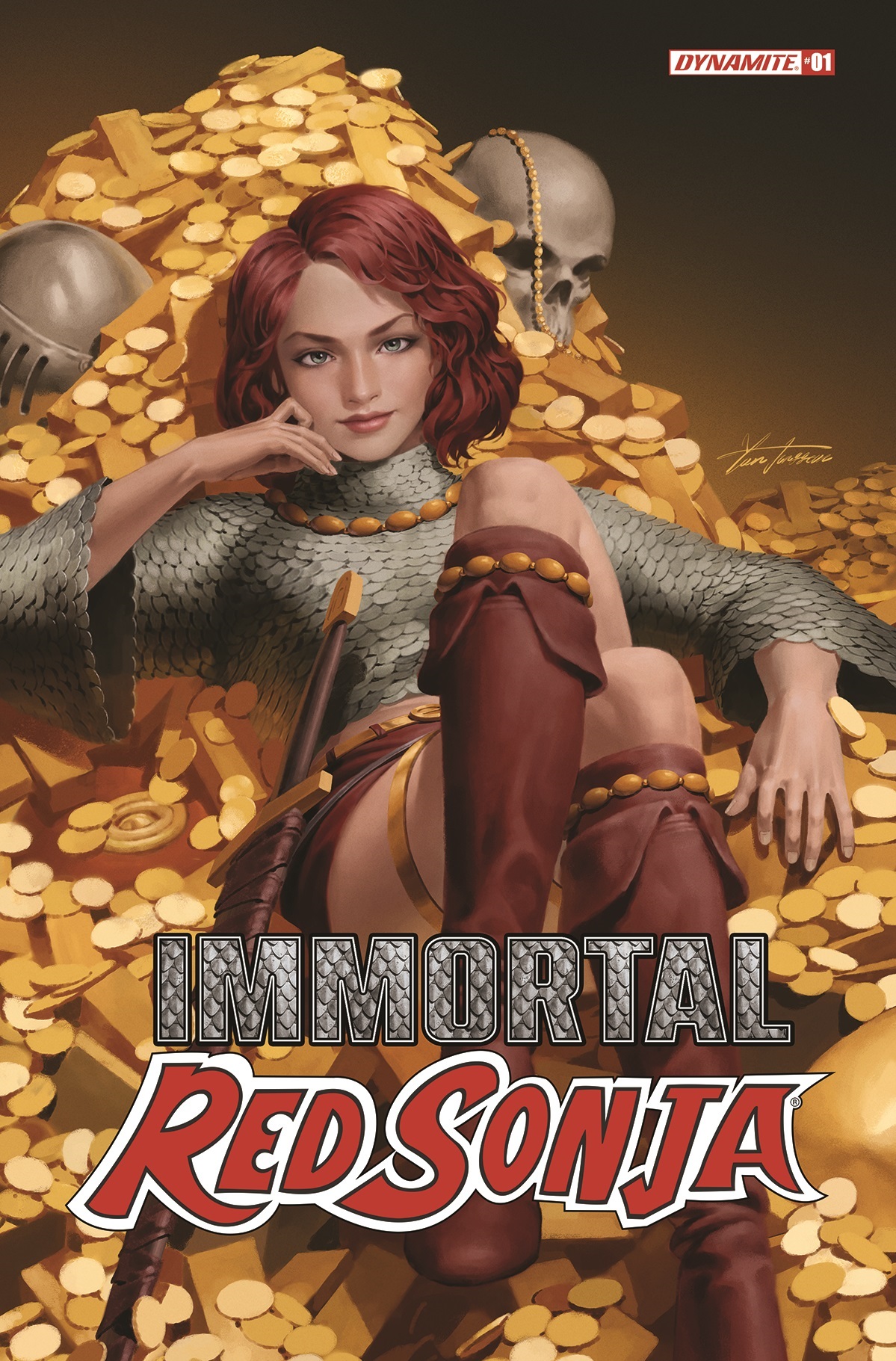 January 20, Mt. Laurel, NJ: Acclaimed comics and prose scribe Dan Abnett returns to the mythos of King Arthur Pendragon, Excalibur, the Knights of the Round, and more, and takes Red Sonja along with him in the new title Immortal Red Sonja launching this April.

Red Sonja is of course no stranger to worlds of fantasy and fable, but in her latest upcoming series, she’ll be coming face to face with some of the foundational players of the genre. She finds herself cursed by a mysterious chainmail shirt and seeks out the counsel of the legendary wizard Merlin. This take on her costume will be familiar to fans of the character, as homage back to her very first appearance as depicted by Barry Windsor-Smith.

Artist Alessandro Miracolo is on board for the series to depict this iconic look and Sonja’s exciting quest. As a fan first and now professional artist who grew up on the classic artists of Windsor-Smith, John Buscema, and more, he’s excited to tackle this design for the character following his acclaimed contributions to previous Sonja stories. Writer Dan Abnett meanwhile marks his return to the Arthurian mythos, going back decades to his early Knights of Pendragon series for Marvel. 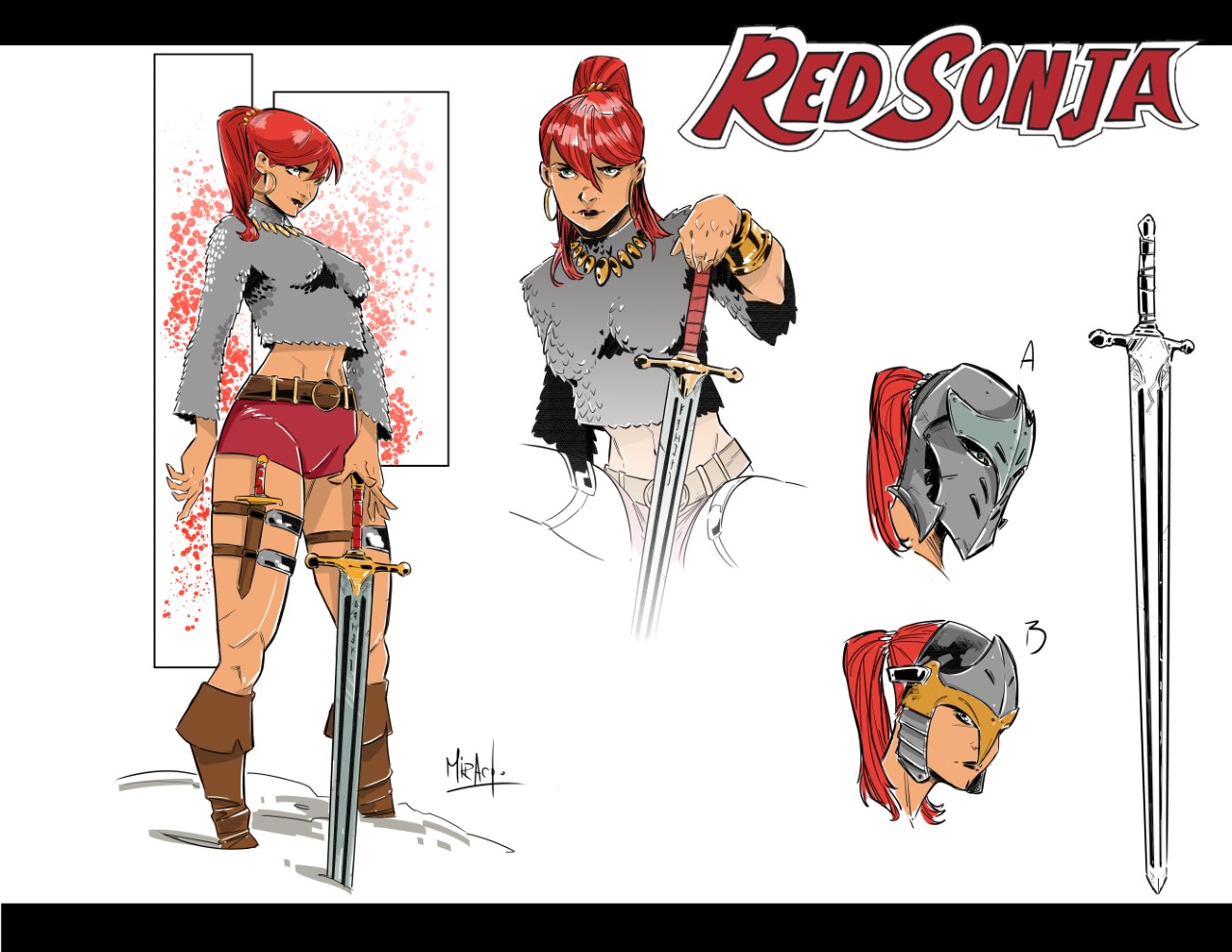 Sonja will be meeting not only Merlin, but other characters from the lore, and she’ll be pursued by the infamous Green Knight. This mysterious character from the stories has been depicted in so many ways through the years, including in a recent critically acclaimed film, and this creative team will have their own take in his complicated dynamic with the She-Devil with a Sword.

“It’s worth saying that this isn’t just an arbitrary shift – just taking her and dumping her in a different fantasy realm,” said writer Dan Abnett. “The shift is all part of the metastory: she’s been magically sent into these new lands to perform a quest, and that ties very much into Arthurian lore, but she’ll meet many other elements of folklore on the way. We’re giving it a very cool, authentic, and realistic edge too. Forget the glossy Hollywood version, this is a grim and savage vision of what it would have been like if it had really happened.”

Abnett is also setting up the story for the opportunity to explore other elements of fantasy canon, beyond the world of King Arthur and company.

Artist Miracolo added, “Luckily I’m a fan of the sword and sorcery genre, but talking to Dan and his idea of bringing Red Sonja into medieval fantasy, it’s fantastic. I love those tales combining two fantastic worlds – it’s really stimulating. I am watching films and reading stories that can give me ideas for my art.”

To mark the occasion of this brand new title and the return of a historic design for the character, Dynamite and editor Nate Cosby have called upon a regiment of valiant cover artists. David Nakayama, Junggeun Yoon, Joseph Michael Linsner, Sean Izaakse, and a cosplayer have answered the call. 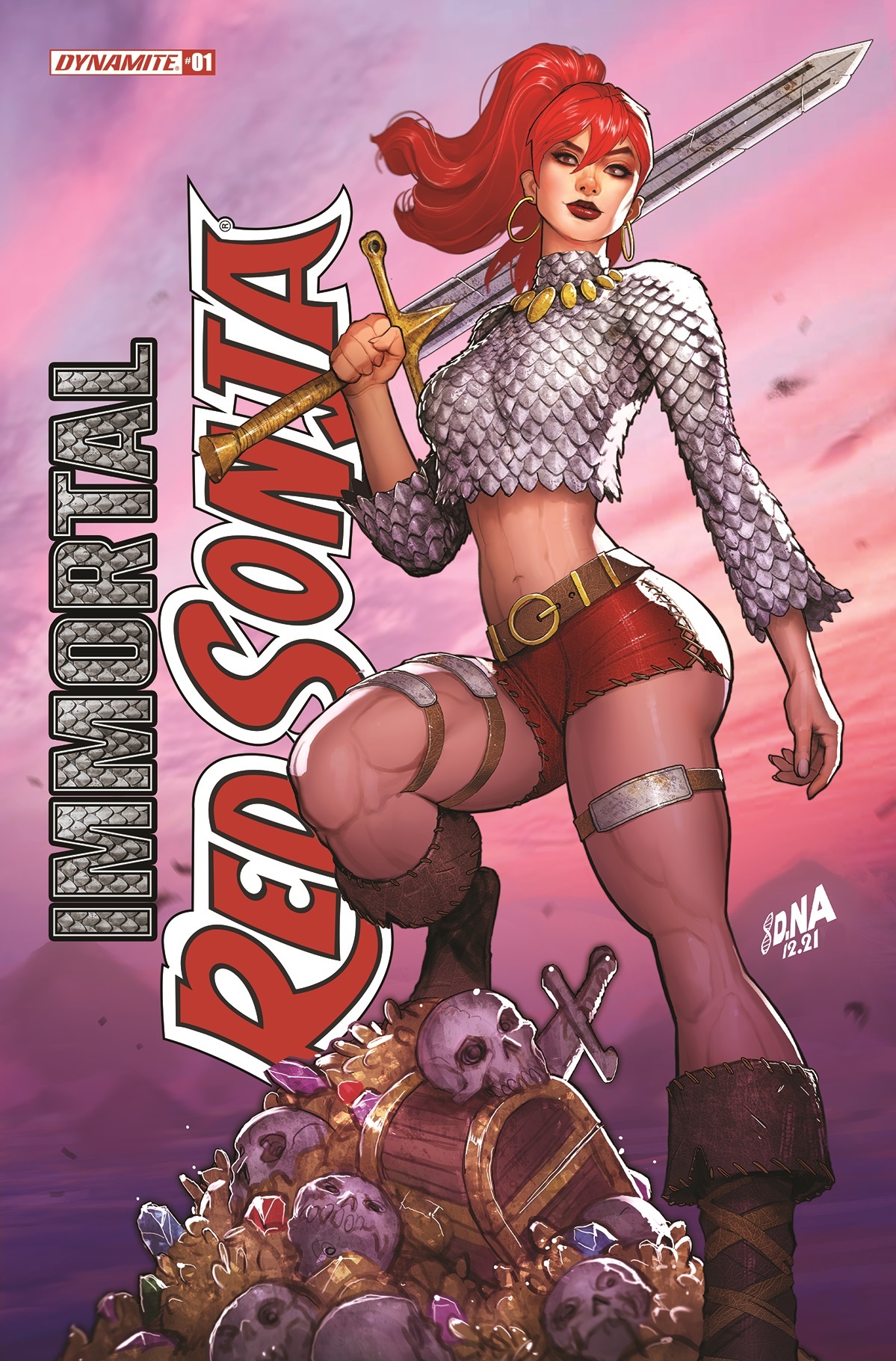 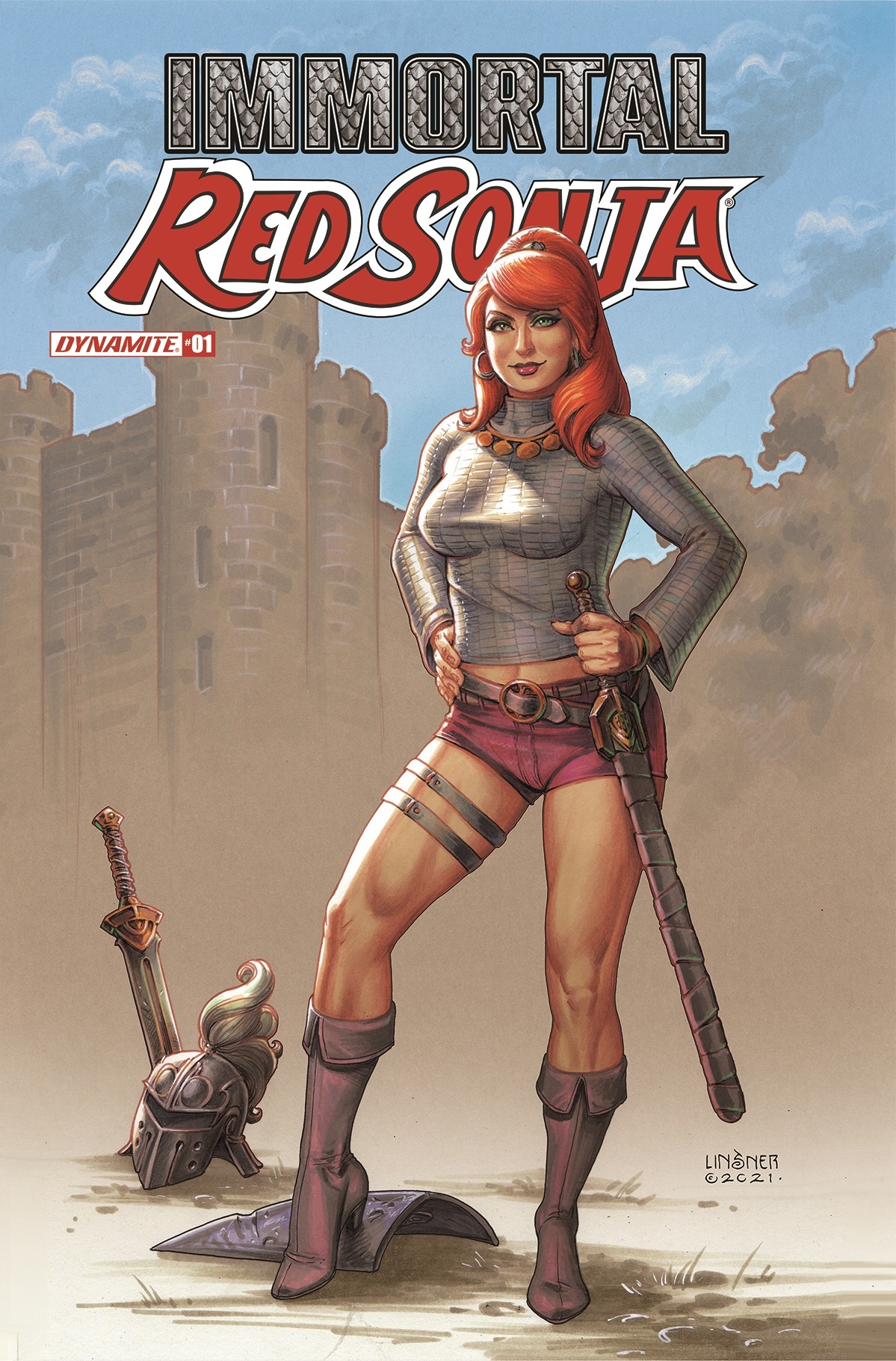 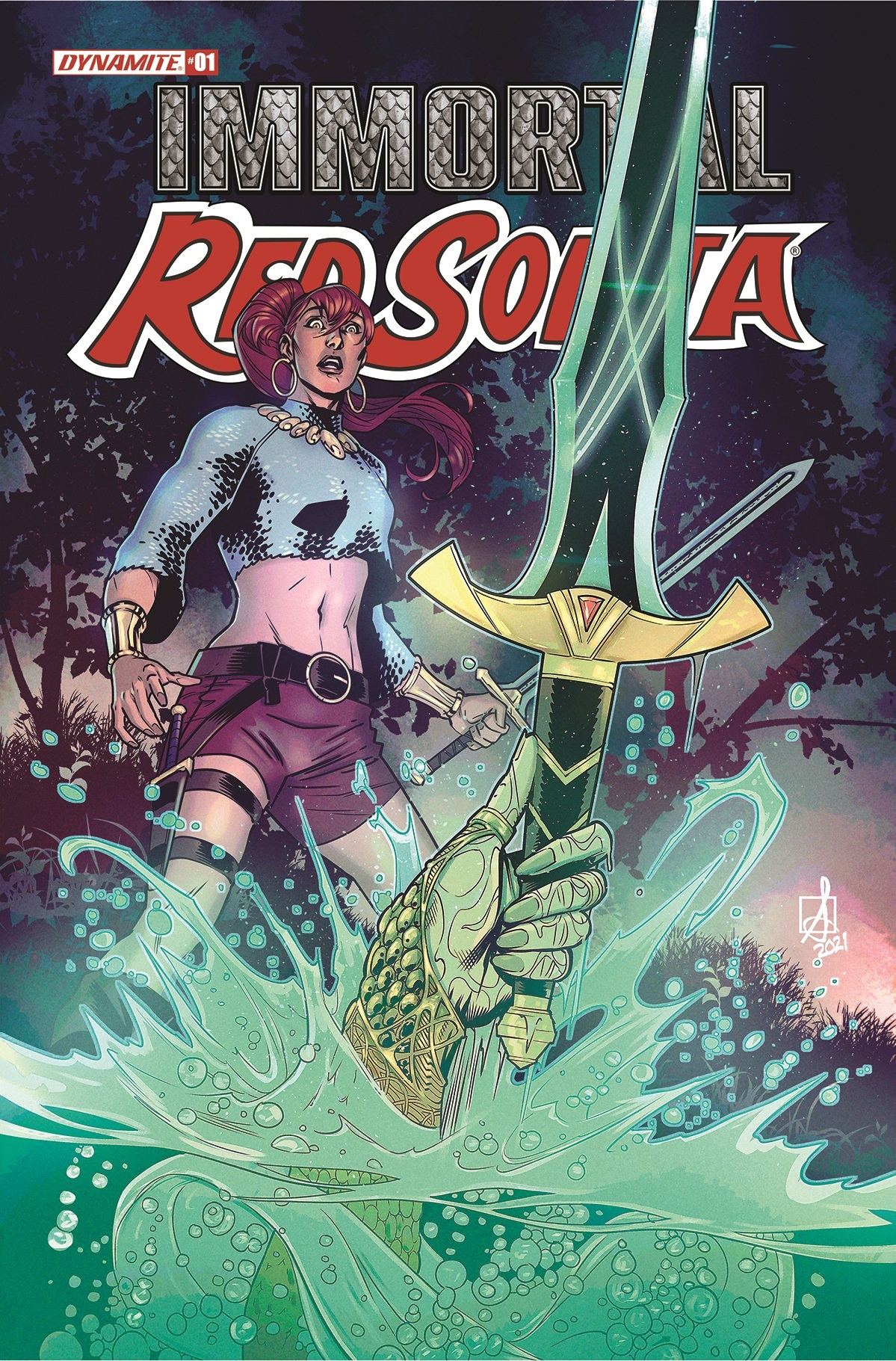 IMMORTAL RED SONJA #1 is solicited in Diamond Comic Distributors’ February 2022 Previews catalog, the premier source of merchandise for the comic book specialty market, and slated for release in April 2022. Comic book fans are encouraged to preorder copies of the issue with their local comic book retailers. It will also be available for individual customer purchase through digital platforms courtesy of Comixology, Kindle, iBooks, Google Play, Dynamite Digital, ComicsPlus, and more!