Red Sonja Against the Hordes of Hell in Chaos! Crossover

Debuting from Dynamite in January 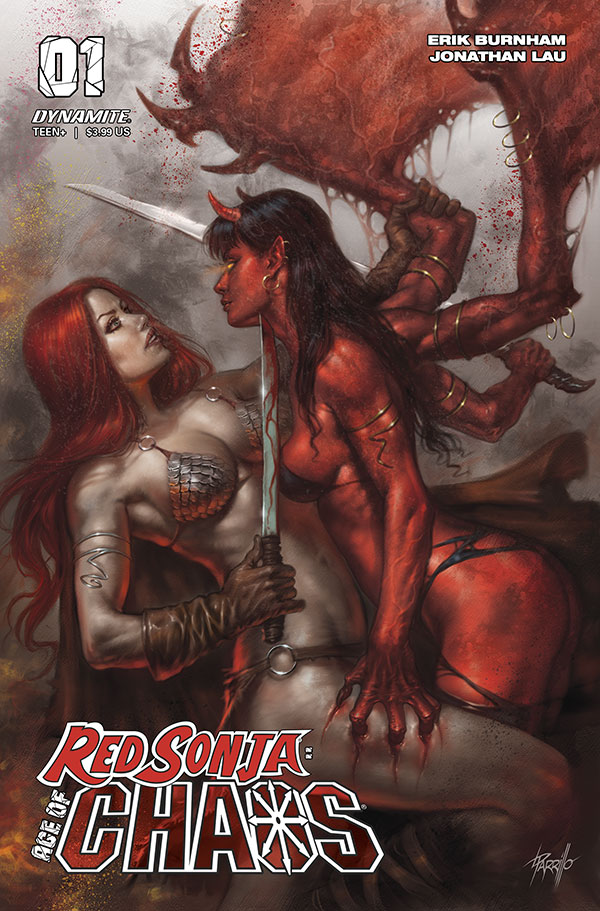 This fight and fright-filled new limited series is written by returning Sonja scribe Erik Burnham (Vampirella/Dejah Thoris, Ghostbusters). Joining him on art is the one and only Jonathan Lau (Red Sonja, Green Hornet, Pathfinder: Worldscape).

Burnham is bringing the present into the past, with a Chaos! invasion of the Hyborean Age. A cosmic level spat between Mistress Hel and Lady Demon leaves Sonja and characters like Chastity, Evil Ernie, Purgatori, Jade and more stuck in the middle. Alliances will be made to combat this mayhem and great evil, but Sonja may have to resort to something she never would have guessed – enlisting the help of her sworn enemy, Kulan Gath!

“I am INCREDIBLY excited to get a return trip to the Hyborean Age to spend a little more time with Red Sonja. She’s an incredibly fun character to write, and the contrast of her nature up against the magic and mayhem of the Chaos! characters is going to make for a good time at the ol’ keyboard,” said writer Erik Burnham. “Even better, Jonathan Lau’s art is gonna blow the doors off (please, have all doors reinforced before opening the book). Hyperbole aside, I’m looking forward to the project and can only hope the readers have as much fun as we do on it. Now let’s go get violent!”

Artist Jonathan Lau sums up why this series is the perfect book for him, “My mission has always been to bring big action back into comics, which is sorely lacking in the “dialogue-heavy” style of comics nowadays. Writers like Erik have given me artistic freedom when it comes to fight scenes. He says something like ‘Hey Jon, I leave to you these 3-5 pages as long as this certain guy wins but loses an arm at the last panel.'”

Acting as overall hype man for this time-displaced deathmatch is editor Matt Idelson, “It’s kind of amazing mixing two disparate franchises together and discovering just how well they actually fit. Erik’s done a bang-up job finding what makes each of the characters tick, not to mention how they’d tick each other off!”

New readers can come into this series with no prior knowledge. However, fans may recall Erik contributed to the previous ongoing Red Sonja volume helmed by Amy Chu and Carlos Gomez. The series’ central arc, titled Worlds Away, threw the She-Devil with a Sword into the far-flung future of modern-day New York City. That fish out of water premise allowed for fan-favorite scenes of levity and new challenges for the heroine. This time around, Sonja has the home advantage. Burnham has teased that there may be callbacks and Easter eggs in this new series for fans of that previous run. Though as he says, “Anything we mention would just be for flavor, and not really a main ingredient.”

For a series with so many fan-favorite characters, Dynamite is treating fans to a cornucopia of covers blending the sword and sorcery aesthetic of Sonja, the blood-soaked terror of Chaos! and the epic crossover aspect of the series! Leading the pack is painter and Dynamite legend Lucio Parrillo (Red Sonja: Birth of the She-Devil, Vengeance of Vampirella), depicting Sonja and Purgatori locked in mortal combat and drawing blood. Alan Quah (X-O Manowar, Judge Dredd) captures that crossover chaos with nearly the full roll call on his cover – but there are more surprises in the series of course! Ale Garza (Deadpool, Dejah Thoris) and Cian Tormey (Valkyrie: Jane Foster) add their special touch to covers. While the Hyrkanian Hero is represented in cosplay by Shannon Kingston, following her run on covers for Birth of the She-Devil. 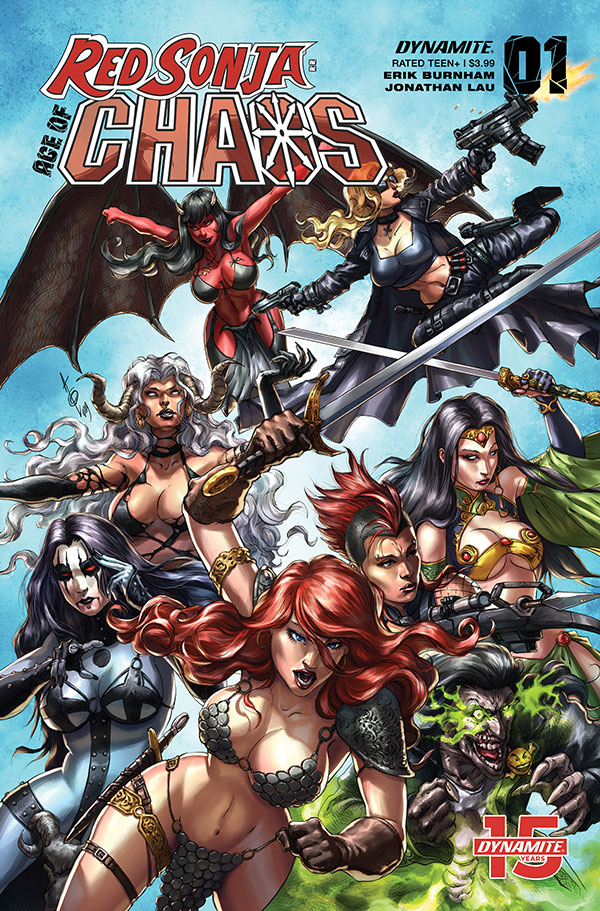 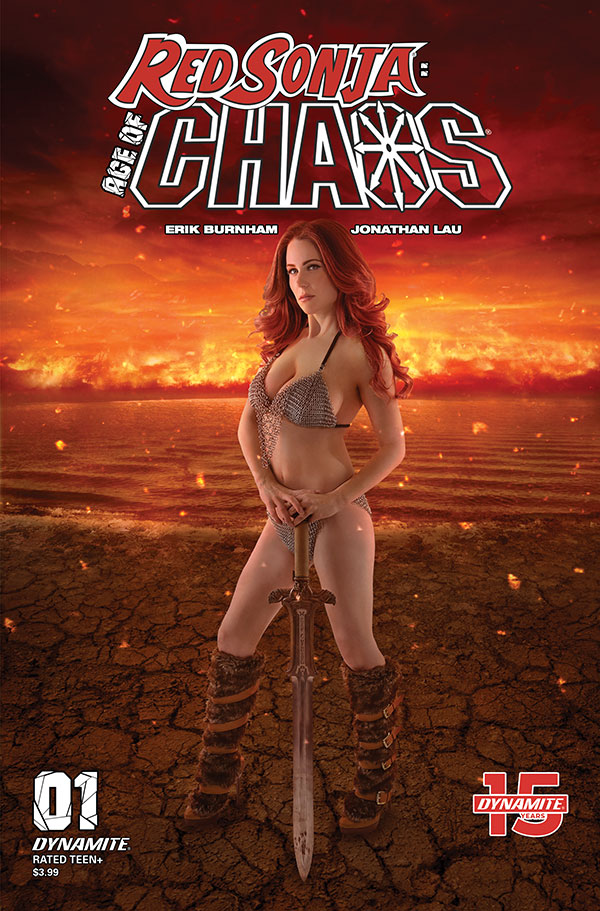 RED SONJA: AGE OF CHAOS #1 will be solicited in Diamond Comic Distributors’ November 2019 Previews catalog, the premier source of merchandise for the comic book specialty market, and slated for release in January 2020. Comic book fans are encouraged to preorder copies of the issue with their local comic book retailers. It will also be available for individual customer purchase through digital platforms courtesy of Comixology, Kindle, iBooks, Google Play, Dynamite Digital, ComicsPlus, and more!

More Bat-Heroes Fight Against the Clown Prince of Crime in Batman: The Joker War Zone!