Phoenix FearCON – a celebrated go-to event in Arizona and – as of last year – a major player in the virtual film festival arena – is celebrating a decade with a major celebration.

Phoenix FearCon Independent Horror Film Festival is a community-driven event focusing on the independent genre film maker and the obstacles they face trying to get their film projects noticed. In addition, PFC aims to make its events interactive, so that there are not just film screenings. More than three-dozen guests from the horror, sci-fi, and fantasy film, theatre, and music community will be on hand at panels, interviews, and meet/greets with their fans. Phoenix FearCon is dedicated to strengthening the general understanding of the horror genre by providing audiences independent, cutting‐edge, original films – authentic representations of the genre from around the world.

While FearCON looks to the future it also celebrates those that have laid the foundation of this popular and profitable industry. This year, FearCON will initiate THE REGGIE BANNISTER Lifetime Achievement Award honoring those that opened doors and our minds. The inaugural honoree is the great master himself, the mastermind behind Troma Entertainment, Lloyd Kaufman. Lloyd and Reggie will be on hand for the Saturday night gala event.

The event will be hosted by horror genre historian and media personality, Jay Michaels. 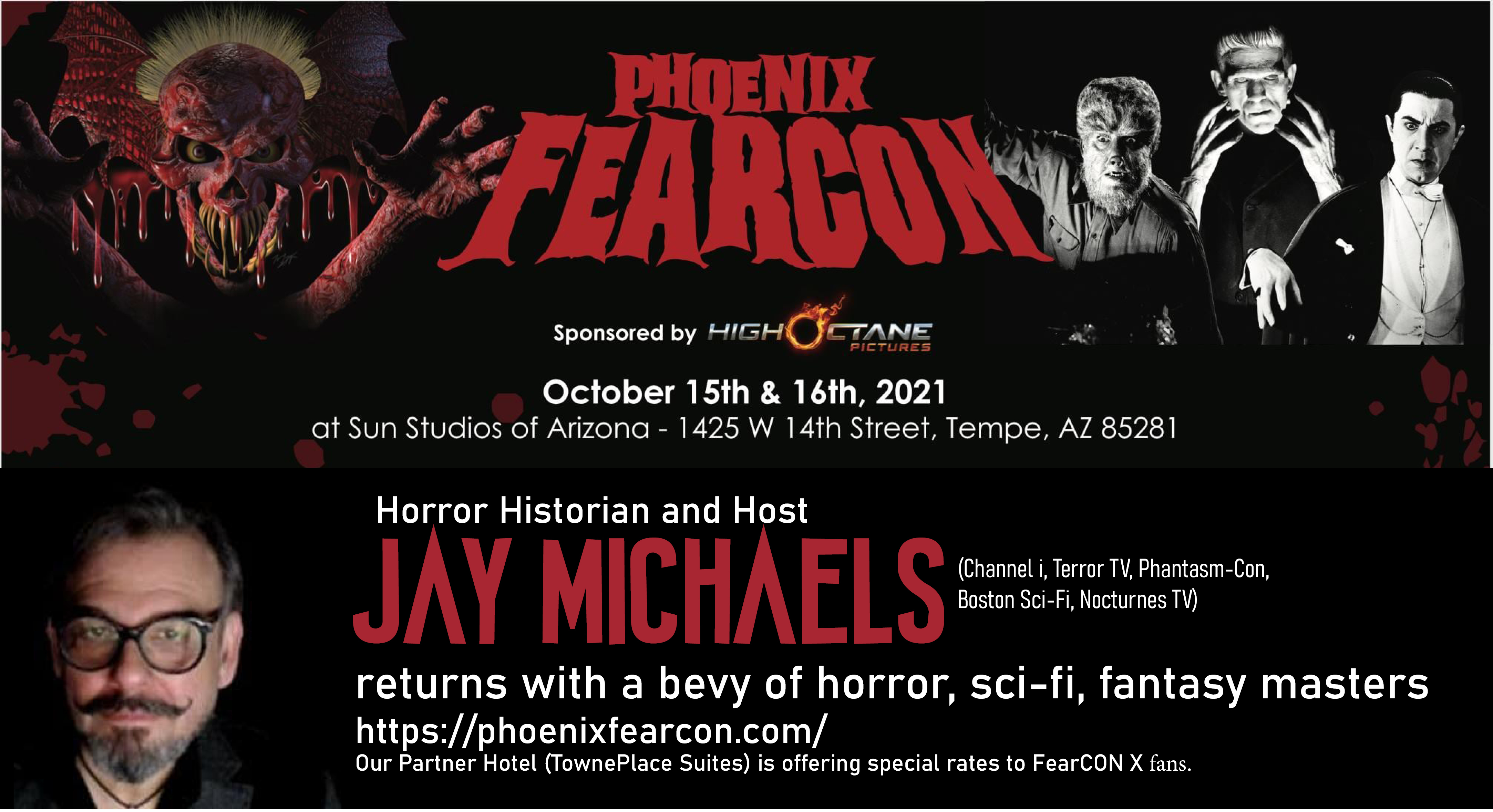 INSIDE THE ACKERMANSION. Guest writer/personality, Joe Moe takes us inside the famed Ackermansion of Forrest J Ackerman, the creator of the legendary Famous Monster of Filmland and then he joins host Jay Michaels to discuss the 90th anniversary of Universal’s Dracula and Frankenstein, along with the 80th anniversary of the Wolfman.

DRACULA HAS RISEN IN GRAPHIC NOVELS. Chris McAuley will be in attendance to unveil the new series of Bram Stoker stories as graphic novels and other ephemera. Dacre Stoker and McAuley discuss this new venture as part of FearCon TV on the event’s website.

BLUE MOON. Rob Cobasky tells a compelling tale of a “dead werewolf” in Argentina. He will tell the story and at the end, audiences can see the poor dead(?) creature.

KILLER FLICKS. The Awesomelys discuss horror films in the 80s and take another look at some of the more obscure entries

A CONVERSATION WITH PAT SWINNEY KAUFMAN. An explanation of the business end of the movie industry. As executive director of the New York State Governor’s Office for Motion Picture and Television Development and as deputy commissioner of Empire State Development, Kaufman was responsible for facilitating production by identifying and clearing locations and providing a statewide network of federal, state and local contacts.

WOMEN OF COLOR IN TERROR hosted by Cindy Sanabria. Discussing the new age of terror films and its new set of players.

“THE FINAL GIRL.” Dineta Williams-Trigg and Thommi A’mal discuss the genesis and history of the famed “survivor” at the end of many genre films.

HELLBENT LIVE WITH S. A. BRADLEY the celebrated podcaster will be at the event chatting with host Jay Michaels, along with select artists and even audience.

MUSIC OF THE NIGHT

Musical guests include Agents of Lust, Redrum, Torso, and highlights from Rocky Horror Picture Show from the AZRocky Shadow Cast

The Umbrella Corporation vehicle from Resident Evil and Ghostbusters’ Eco-Beast will be on display with other vehicles and movie memorabilia.

Relax in the FearCon TV Room and watch trailers, indie films, classics, and video interviews including an in-depth discussion of indie comics with guests including Patrick Hickey, Jr. (Condrey); and a special video panel with Rhett C. Bruno and Joel Eisenberg about developing novels into film and TV series

The first annual Reggie Bannister Award – named for the actor who embodied the Phantasm film series for decades – will be awarded to legendary writer/director/producer/actor, Lloyd Kaufman for his work in bringing thought-provoking, visually stunning, and envelope-pushing films through Troma Entertainment including The Toxic Avenger, Nuke’em High, and #shakespearesshitstorm