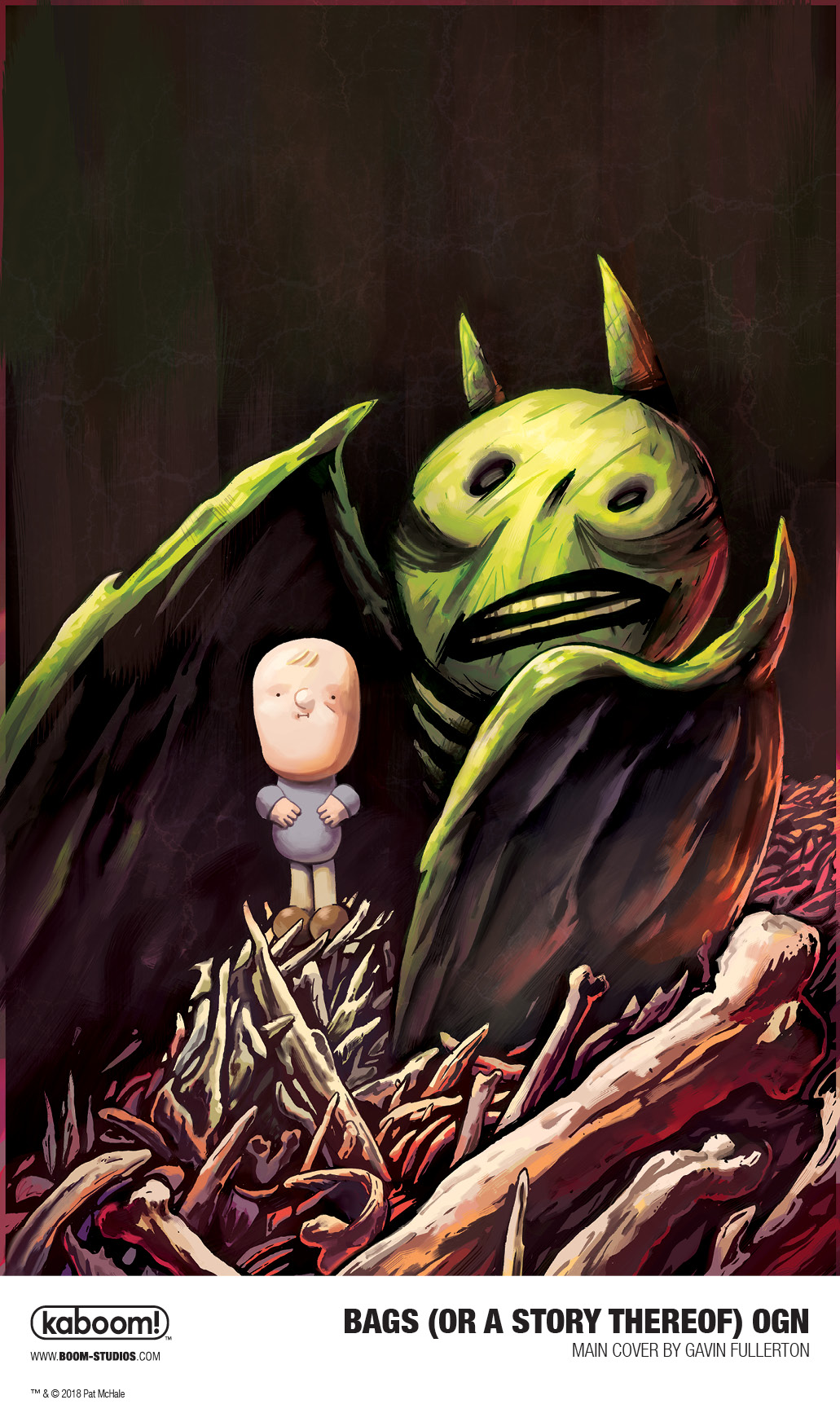 Arriving in stores July 2019, BAGS (OR A STORY THEREOF) is the tale of John Motts. He is a man who had a dog, but now that dog is gone. John searches his house, his street, and his town, but the dog is nowhere to be found. John soon realizes that he must travel further, past the road and into the trees if he’s ever to find out the truth of what happened to his dog.

“Before making Over the Garden Wall, I tried to write a novel in one week and failed; instead I ended up with an odd, rather experimental story about a man looking for his missing dog. It’s very exciting that my weird little book is being adapted into a full on graphic novel, and even more exciting that Gavin Fullerton is the one adapting it!”said Patrick McHale. “I’m extremely happy with what he’s done with this story, and I hope other people like it too. (Note: It has the Devil in it, and a walrus who puts things in bags, so… you might like it.)”

“I’m a huge fan of Pat’s work, so I was incredibly excited when I was asked to adapt his short story BAGS into a full-length graphic novel.”said Gavin Fullerton. “BAGS is sad, fun, spooky and a wee bit strange. It’s the kind of story you come away from feeling a little less alone. I hope the comic can make people feel the same way.”

BAGS (OR A STORY THEREOF), featuring a cover by Fullerton, is the latest release from BOOM! Studios’ award-winning  KaBOOM! imprint, home to comics for middle grade and younger readers including licensed series such as Adventure Time™, Steven Universe™, Rugrats, and Over The Garden Wall™, along with original series like Pandora’s Legacy by Kara Leopard, Kelly & Nichole Matthews, Bodie Troll by Jay Fosgitt, Ruinworld by Derek Laufman, and Just Beyond by R.L. Stine, Kelly & Nichole Matthews.

“Based on Patrick McHale’s beloved short story, BAGS (OR A STORY THEREOF) is a journey about one man, John Motts, and his search for his dog Beth. John is an interesting narrator in this story, with an almost childlike wonder, John has to go out into a bizarre and confusing world to figure out what happened to her.” said Whitney Leopard, Editor, BOOM! Studios. “Pat and Gavin have beautifully blended humor, suspense, and loss to create a story that will resonate with readers of any age – and remind them just why it’s important to cherish those close to you.”

Print copies of BAGS (OR A STORY THEREOF) will be available for sale in July 2019 at local comic book shops (use comicshoplocator.com to find the nearest one), bookstores and the BOOM! Studios webstore. Digital copies can be purchased from content providers, including comiXology, iBooks, Google Play, and the BOOM! Studios app.