The First in a Trilogy of Original Graphic Novels from Ben Fisher, Emily S. Whitten, and Michelle Nguyen Announced for April of Next Year 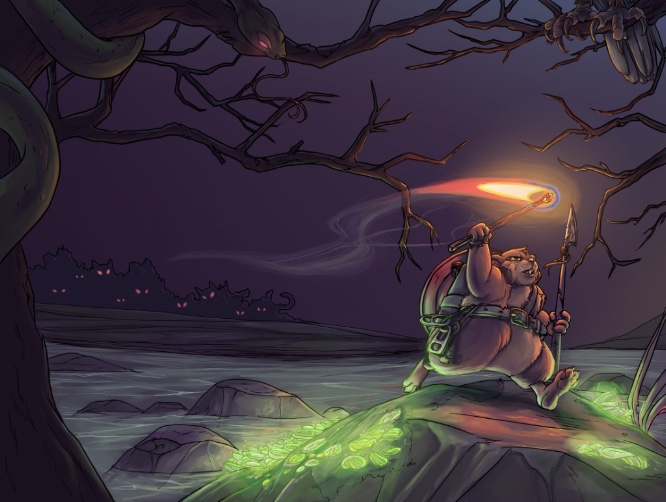 ST. LOUIS—Just after the opening of the exhibit hall at New York Comic Con 2018, Lion Forge is proud to announce a brand-new series under its Caracal banner for ages 8-12: The Underfoot!
The new series, co-written by Ben Fisher and Emily S. Whitten with gorgeous artwork from Michelle Nguyen, will be told over the course of three volumes beginning in April.

“Emily and I have been developing this story for years. It’s the most comprehensive world-building and the most diverse cast of characters I’ve ever helped create,” says co-writer Ben Fisher. “And Michelle has brought all of it to life in breathtaking fashion. We’ve been waiting for what feels like an eternity to share and explore this universe with readers and are thrilled to finally begin taking this journey with all of you!”

“Ben and I have been having a blast creating the vast, intricate world of The Underfoot, which we’ve packed full of animal adventures and weird science,” says co-writer Emily S. Whitten. “We couldn’t ask for a better artist than Michelle to bring our visions and our diverse characters to life. After several years of work, we’re so excited to finally get to share our world with comics fans, and hope you love it as much as we do!”

It has been untold years since the Giants-That-Were disappeared, leaving behind their relics and strange science . . . and the animals forever changed by both. But it will fall to the smallest of these creatures to forge an unlikely alliance among the survivors when a new, terrible threat arises.

“The Underfoot is the first full graphic novel I have completed, and it has been an absolutely incredible journey and a fantastic growth experience,” says Michelle Nguyen. “Since the beginning, I have fallen in love with all of the characters and their individual traits and quirks. I cannot wait to show everyone the incredible story that Emily, Ben, and I have built!”

In The Underfoot Volume 1: The Mighty Deep, the valiant Hamster Aquatic Mercenaries must soon set sail on a journey to save their badger allies from dangerous flooding; but first they’ll need new recruits. Only the best of the best can join the ranks of H.A.M., and the colony’s most ambitious young hamster pups compete for their chance at glory and prestige. Those who succeed, however, soon discover that life outside their burrow is not the grand adventure they imagined, but instead find a world of deadly threats and conflicting stories about their species’ origins.

Combining heroic battles, dark mysteries, and heartfelt friendships, The Underfoot: The Mighty Deep is the beginning of an epic sci-fi saga chronicling the animal kingdoms left to rise and fall in the absence of the Giants-That-Were. When the hamsters learn the truth about their past, will they find the strength to overcome the forces aligning against them, or will their tiny horde be wiped from the earth?

Look for the first volume of The Underfoot in Diamond’s February-dated PREVIEWS catalog, highlighting items in comic shops in April of 2019, and look for details on future volumes in the coming months!