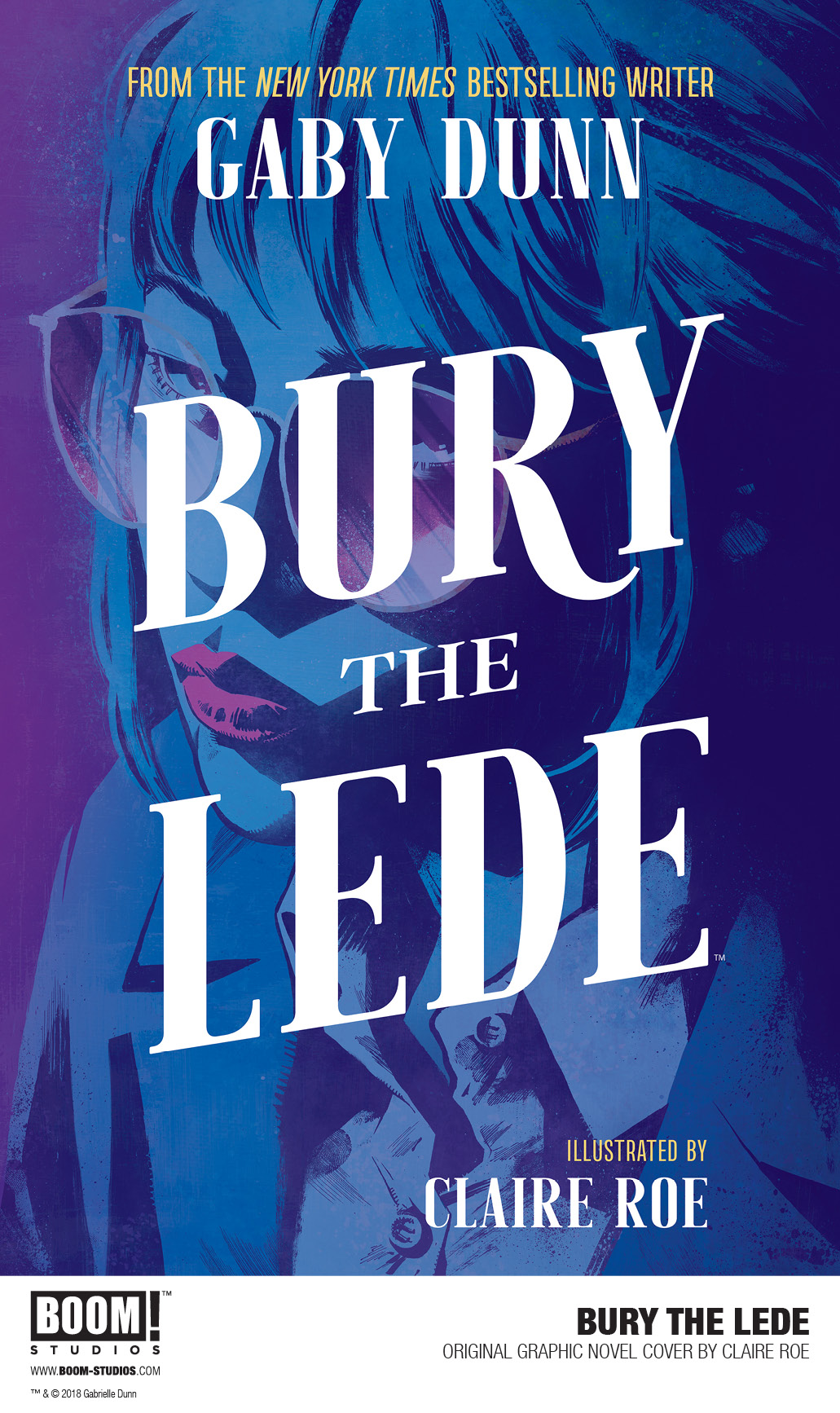 LOS ANGELES, CA (December 10, 2018) – BOOM! Studios today announced BURY THE LEDE, a new original graphic novel from New York Times bestselling author Gaby Dunn (I Hate Everyone But You) and artist Claire Roe (Batgirl and The Birds of Prey), which arrives in stores October 2019. Inspired by Dunn’s own experiences at The Boston Globe as a reporter, BURY THE LEDE is a timely story about how we find answers in an increasingly complex world and the hidden threats surrounding those truths.

Twenty-one-year-old Madison T. Jackson is already the star of the Emerson College student newspaper when she nabs a coveted night internship at Boston’s premiere newspaper, The Boston Lede. The job’s simple: do whatever the senior reporters tell you to do, from fetching coffee to getting a quote from a grieving parent. It’s grueling work, so when the murder of a prominent Boston businessman comes up on the police scanner, Madison races to the scene of the grisly crime. There, Madison meets the woman who will change her life forever: prominent socialite Dahlia Kennedy, who is covered in gore and being arrested for the murder of her family. The newspapers put everyone they can in front of her with no results until, with nothing to lose, Madison gets a chance – and unexpectedly barrels headfirst into danger she never anticipated.

Dunn has distinguished herself as a New York Times bestselling author, journalist, YouTuber, actress, and comedian. She and her comedy partner, Allison Raskin, created the successful YouTube channel Just Between Us along with the novel “I Hate Everyone But You,” published under Wednesday Books’ inaugural list, an imprint of St. Martin’s Press, with a sequel to be published in 2019.

She has written for The New York Times, Cosmopolitan, New York Magazine, The Boston Globe, and Vulture, as well as a finance column for Marie Claire. Dunn served as a writer on ”Big Mouth” (Netflix) and in 2016, co-created and starred in a pilot for MTV, later developing original half-hour pilots for 20th Century Fox, YouTube Red, and FX, as well as joining the cast of “Take My Wife” (Starz) in the role of Brie. She is also the host and creator of the podcast, Bad With Money With Gaby Dunn, which has been featured as one of the “Best New Podcasts of 2016” by The New York Times and Vulture. The show is now in its 3rd season and a book based on the podcast will be published by Simon & Schuster on January 1st, 2019.  BURY THE LEDE is Dunn’s graphic fiction debut release.

“I’m obsessed with ‘ripped from the headlines’ crime shows and am so honored and stoked to be jumping into this genre, especially in a medium like graphic novels which allowed me to collaborate with incredible talent like my editor Dafna Pleban and artist Claire Roe,” said writer Gaby Dunn. “I love working alongside women to make cool stuff about flawed, complex female characters like our book’s heroine (and the women she surrounds herself with). Especially in a genre like crime that is so heavily male, it’s been cool to make such a queer, colorful, realistic-to-my-own-experiences depiction of being a crime reporter.”

Claire Roe is an acclaimed artist from the east of Scotland and studied animation at Duncan of Jordonstone College of Art, graduating in 2013. She has distinguished herself with dynamic work on some of the biggest properties in comics, including Wonder Woman and Batgirl and The Birds of Prey from DC Comics; Halo: Rise of Atriox from Dark Horse; The Wicked + The Divine from Image Comics; and Welcome Back from BOOM! Studios.

“On the surface this is a crime story, but in its heart it is the story of some very flawed women,” said artist Claire Roe. “We rarely get to enjoy these type of women in media, especially if they’re poc and queer, so getting to dive into this world and draw this story was right up my alley. I think true crime lovers will connect instantly with Madison, and will enjoy uncovering the motivations of the beautiful and enigmatic Dahlia.”

BURY THE LEDE is the first release in an exciting slate of adult original graphic novels from BOOM! Studios’ eponymous imprint, home to a world-class group of licensed comic book series and ambitious original series, including Joss Whedon’s Firefly and Buffy The Vampire Slayer; Abbott from Saladin Ahmed and Sami Kivelä; Mech Cadet Yu from Greg Pak and Takeshi Miyazawa; Grass Kings from Matt Kindt and Tyler Jenkins; and Klaus from Grant Morrison and Dan Mora.

“BURY THE LEDE masterfully blends the thrilling relationships of Killing Eve with the sharp insights of Devil Wears Prada for an affecting reflection on the world around us,” said Dafna Pleban, Senior Editor, BOOM! Studios. “Gaby and Claire bring a different perspective the world of crime fiction, drawing from their own experiences to examine what it really means to be an investigative journalist in a world where it’s getting harder to trust the headlines.”

Print copies of BURY THE LEDE will be available for sale in October 2019 at local comic book shops (use comicshoplocator.com to find the nearest one), bookstores or at the BOOM! Studios webstore. Digital copies can be purchased from content providers, including comiXology, iBooks, Google Play, and the BOOM! Studios app.

For continuing news on BURY THE LEDE and more from BOOM!, stay tuned to www.boom-studios.com and follow @boomstudios on Twitter. 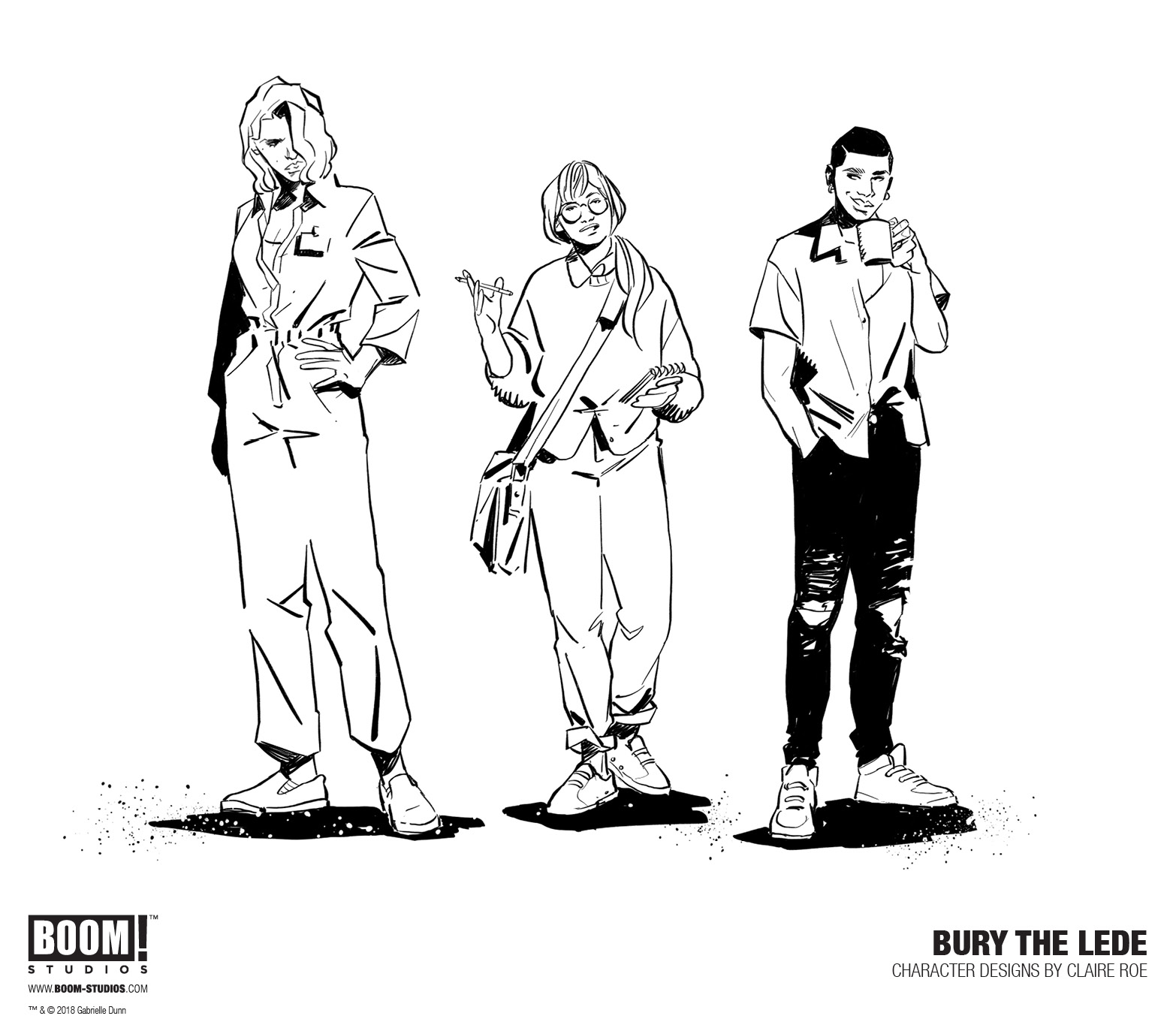 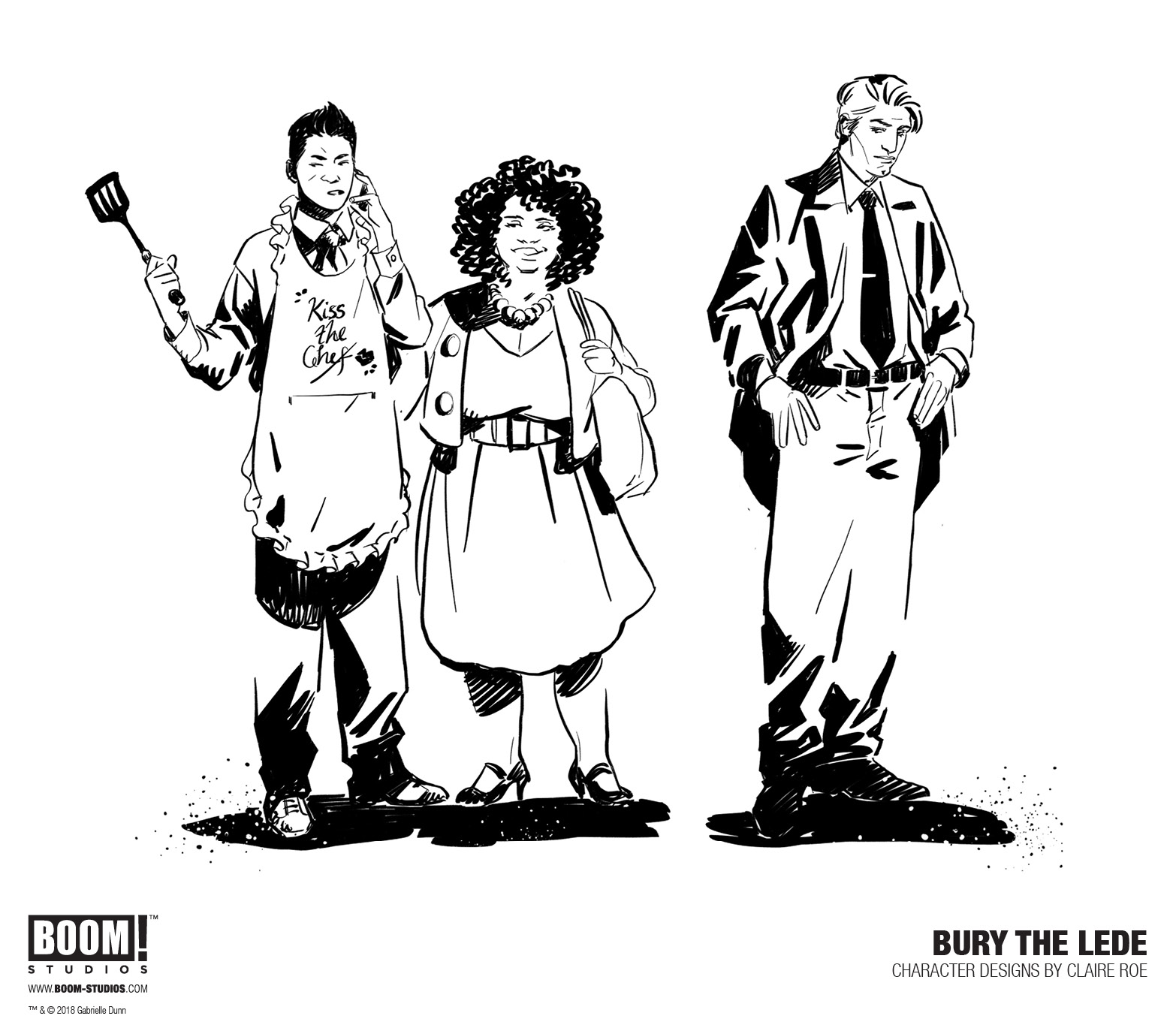 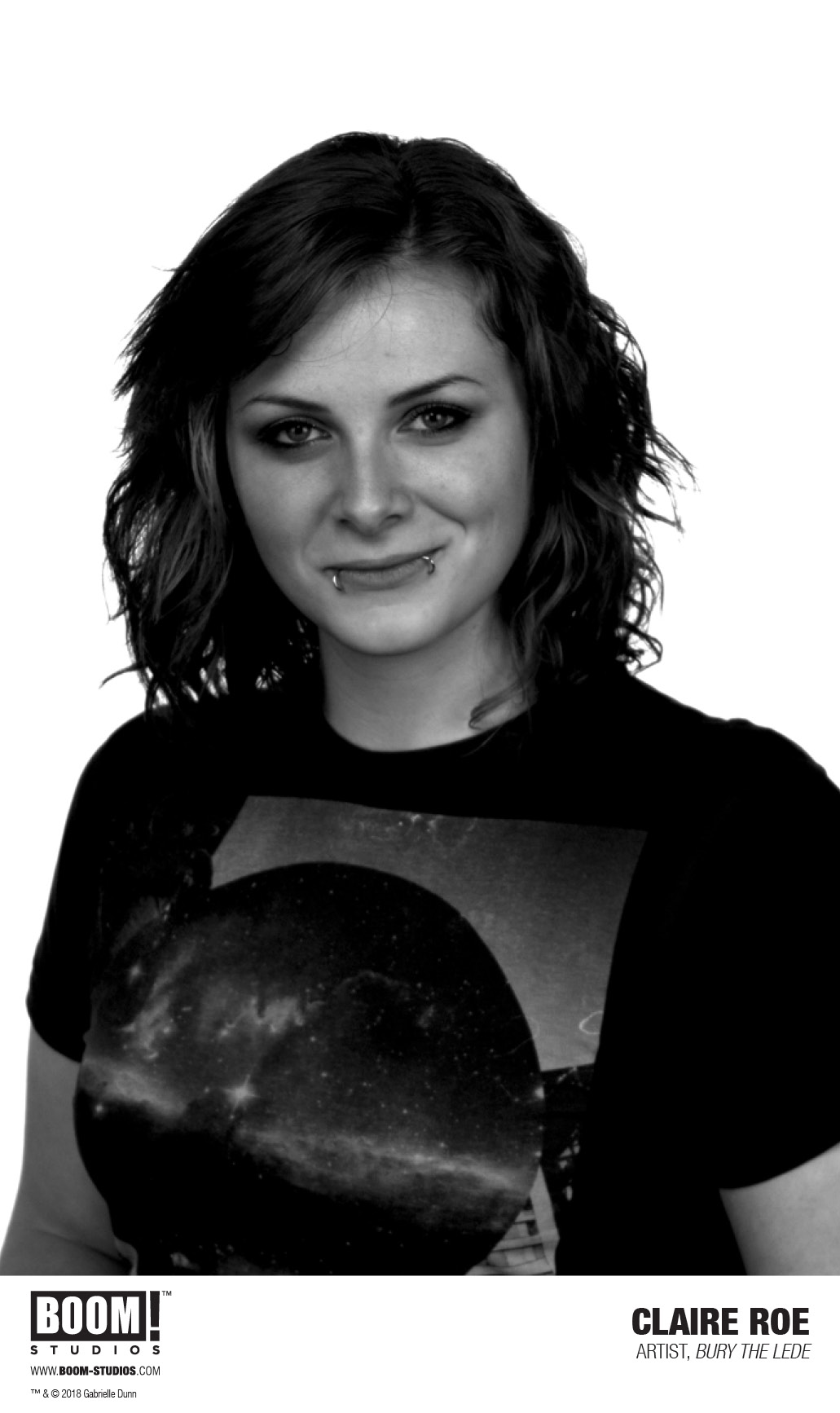 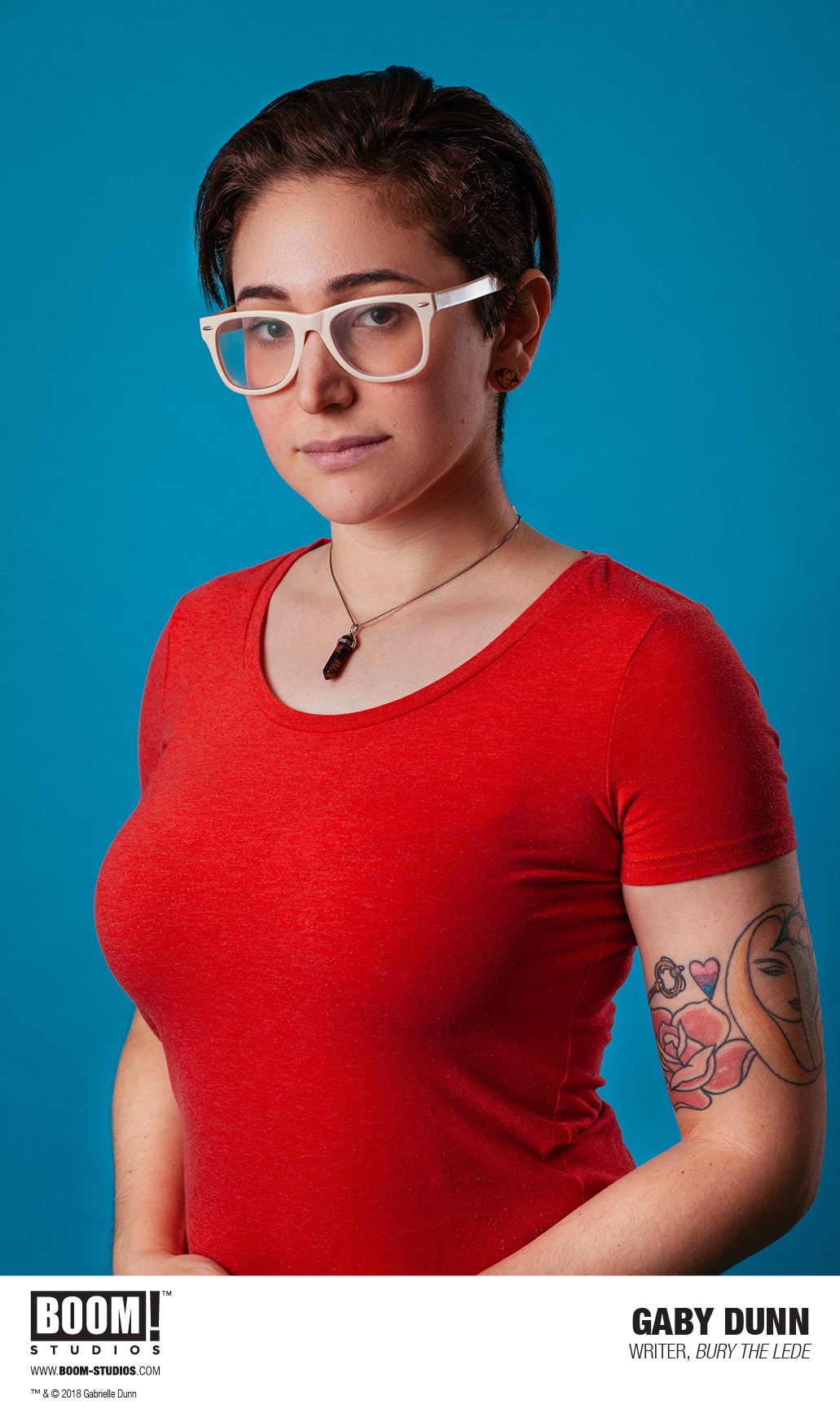