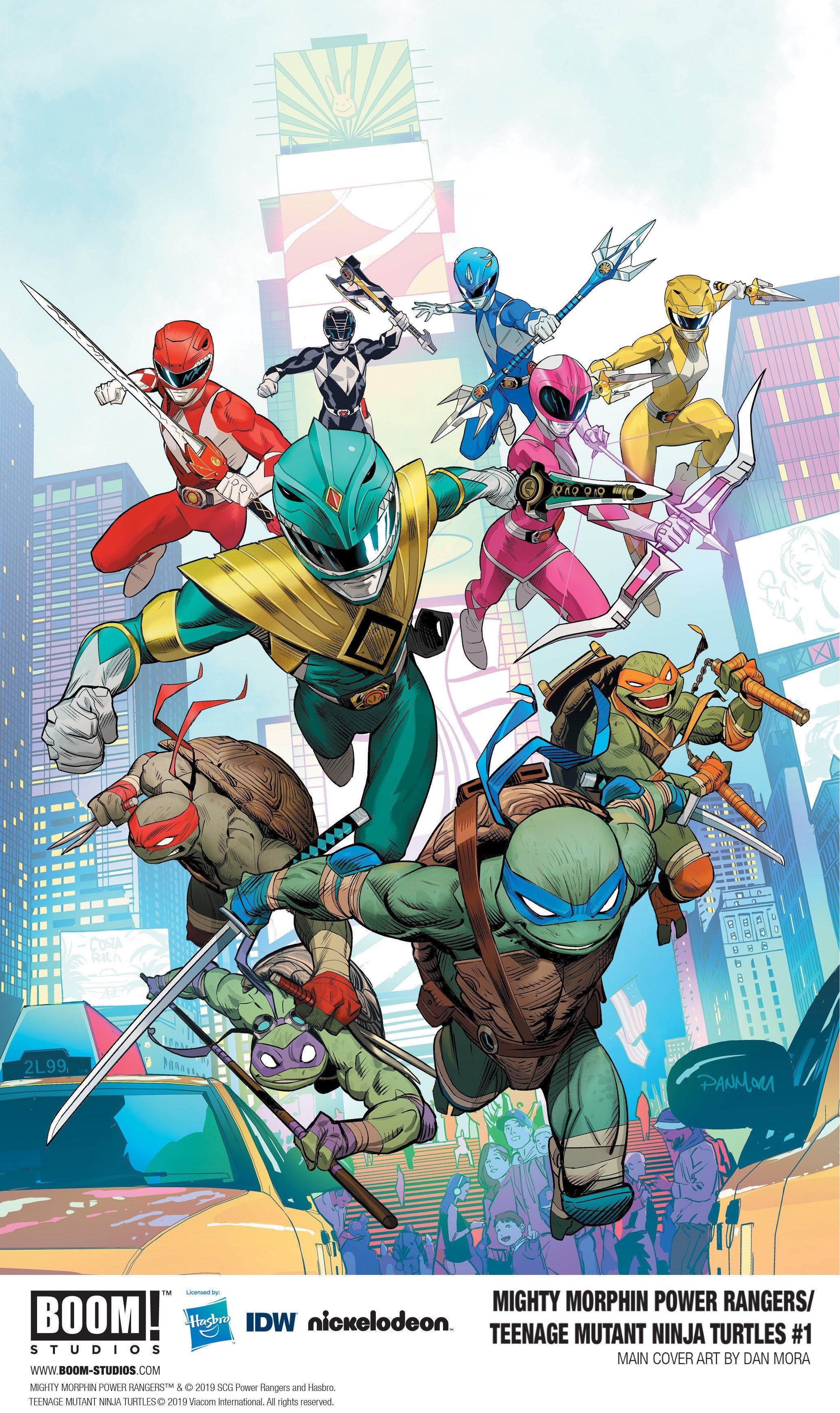 The Power Rangers arrive in New York City to find Tommy Oliver – AKA The Mighty Morphin Green Ranger – but soon discover he’s joined forces with the villainous Shredder and the Foot Clan! As the Rangers are sent reeling by this betrayal, they’re confronted by another (fr)enemy – the Teenage Mutant Ninja Turtles! Can these heroes find a way to work together to defeat the bad guys and save the world from total destruction?!

“Honestly, I’m pretty certain keeping this project a secret has taken years off my life. These two iconic franchises were my TV parents, each teaching me valuable life lessons thirty minutes at a time. The Power Rangers and the Ninja Turtles are too insanely awesome not to bring together. I mean, they’re both color-coded teenage martial artists who fight monsters! It just makes too much sense!” said writer Ryan Parrott. “A huge thank you to Hasbro and Nickelodeon for letting me play with so many of their wonderful toys, as it is truly an honor to be a part of such an exciting crossover. I’m the luckiest kid in the world, and I cannot wait for you all to see what we’ve been putting together.”

Simone di Meo is a comic book artist from Italy. He has recently worked as the artist on Mighty Morphin Power Rangers for BOOM! Studios and Venom Annual #1, Immortal Hulk: The Best Defense, and Old Man Logan Annual for Marvel Entertainment.

“It’s an honor to be able to work on this amazing project. I’m very happy to be a part of this, one of the crossovers I’ve been waiting for since I was a kid,” said artist Simone di Meo. “Drawing these two teams together is a dream come true!”

Currently, Power Rangers is celebrating 26 continuous years on the air, making it one of the longest running kids’ live-action series in television history with nearly 900 episodes aired to date. Created by Haim Saban and launched in 1993 with Mighty Morphin Power Rangers, the franchise celebrates its milestone anniversary year with the 26th season, Power Rangers Beast Morphers currently airing on Saturdays at 8 a.m. (ET/PT) on Nickelodeon in the U.S.

“No one could possibly love the Power Rangers or the Teenage Mutant Ninja Turtles more than the creative team at the helm of this epic event! Which means they’ve got every dream team up scenario you can think of jam-packed into the pages of every issue.” said Dafna Pleban, Editor, BOOM! Studios. “Monsters will grow. Shells will get kicked. And that thing you’re really hoping we’ll do? Yeah, that’s in here, too.”

Print copies of MIGHTY MORPHIN POWER RANGERS/TEENAGE MUTANT NINJA TURTLES #1  will be available on December 4, 2019 at local comic book shops (use comicshoplocator.com to find the nearest one), or at the BOOM! Studios webstore. Digital copies can be purchased from content providers like comiXology, iBooks, Google Play, and the BOOM! Studios app.

For continuing news on MIGHTY MORPHIN POWER RANGERS and more from BOOM! Studios, stay tuned to www.boom-studios.com and follow @boomstudios on Twitter.

POWER PACK IS BACK IN ACTION THIS NOVEMBER!

The Power Records Adventures of Auroraman: Episode 01 – Strike a Pose