Meet the Unluckiest Teens on the Planet in Brand New Series GOOD LUCK From BOOM! Studios 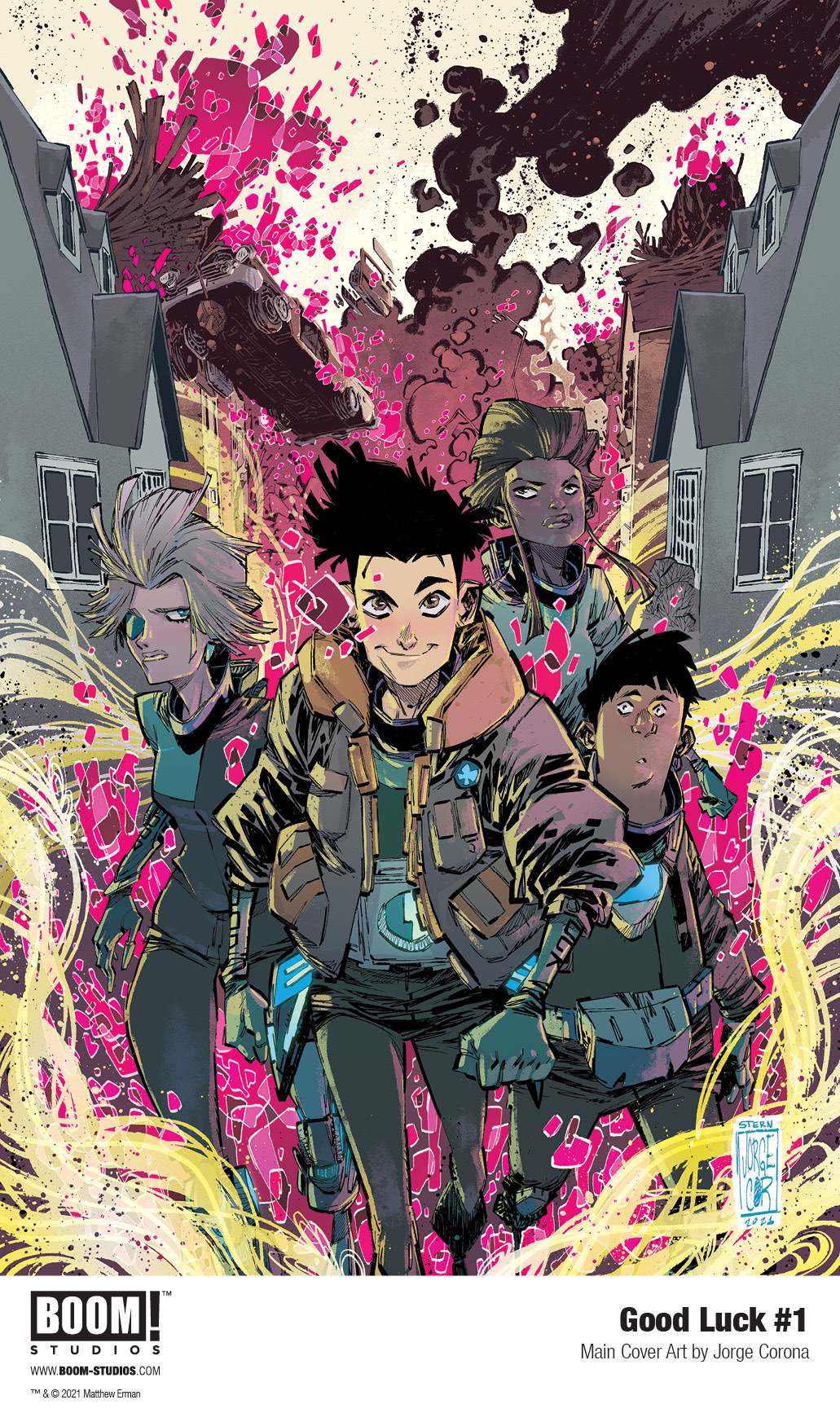 What if Luck was quantifiable, and something everyone was born with? Everyone, except the Unfortunates – teenagers born with absolutely zero Luck. Now, with the world mysteriously plunged into chaos and reality itself threatened, the Unfortunates are our only hope to save the world. When humanity’s last hope is a group of teens with no chance of success, the only thing anyone can do is wish them GOOD LUCK!

Matthew Erman is a comics writer from Columbus, Ohio. Alongside Lisa Sterle, he co-created the critically acclaimed comic horror series, Long Lost, which was optioned for Film/TV by Producer Jenny Klein (The Witcher, Daisy Jones and The Six). Erman has since worked on the comic book series Jim Henson’s The Dark Crystal: Age of Resistance and graphic novel Power Rangers: Sins of the Future with BOOM! Studios, series Care Bears: Unlock the Magic with IDW, as well as the upcoming original graphic novel Bonding, with artist and co-creator Emily Pearson and Vault Comics. His short work can be found in anthologies such as Corpus (2018), Dead Beats (2019) and Everything is Going Wrong (2019).

“GOOD LUCK is not only a mind-bending sci-fi adventure about the four unluckiest teens on the planet but also one of the hardest and biggest things I’ve ever written. It wound up being one of the most personal, as well, because it’s a story about unlucky people taking wild swings and hoping for the best, despite what they may believe about themselves,” said Erman. “I’m so excited for you all to meet the unlucky Artie, Cherry, Hilde, and Joseph, who live in a universe with a lot of weird little inspirations—Annihilation, Talking Head songs, X-Men, Chrono Trigger—that make this series so unique and hopefully very fun for readers to jump into!”

Stefano Simeone is a comic book artist from Rome, Italy. He worked as an artist for Disney Pixar’s Cars 3 graphic novel, BOOM! Studios’ Mega Man: Fully Charged, Shoplifters Will Be Liquidated for Aftershock Comics, and Read Only Memories, Rogue One: A Star Wars Story, Star Wars: The Last Jedi, and Transformers for IDW. In Italy, he’s best known for his four award-winning graphic novels for Tunué and Bao Publishing, as well as his work for Sergio Bonelli Editore.

“Sometimes, a bit of GOOD LUCK is the best ingredient we can have in our lives,” said Simeone. “Luckily, I think I’ve found some with this new series because it’s got some of the funniest and most fun things to draw in the entire world! I can’t wait for everyone to see it!”

“This series is a fly-by-the-seat-of-your-pants adventure that takes off from the very first page and doesn’t stop rolling until the very last. Matthew and Stefano have created a fun, quirky universe filled with weird science and a lovable cast of misfits who are bound to win everyone over as they attempt to tackle a mission daunting enough for adults with all the luck in the world—saving their universe and everyone in it from complete annihilation!” said Jonathan Manning, Associate Editor, BOOM! Studios. “With their luck, what could possibly go wrong?”

Print copies of GOOD LUCK #1 will be available for sale in June 2021 exclusively at local comic book shops (use comicshoplocator.com to find the nearest one) or at the BOOM! Studios webstore. Digital copies can be purchased from content providers, including comiXology, iBooks, Google Play, and Madefire.

For continuing news on GOOD LUCK and more from BOOM! Studios, stay tuned to www.boom-studios.com and follow @boomstudios on Twitter. 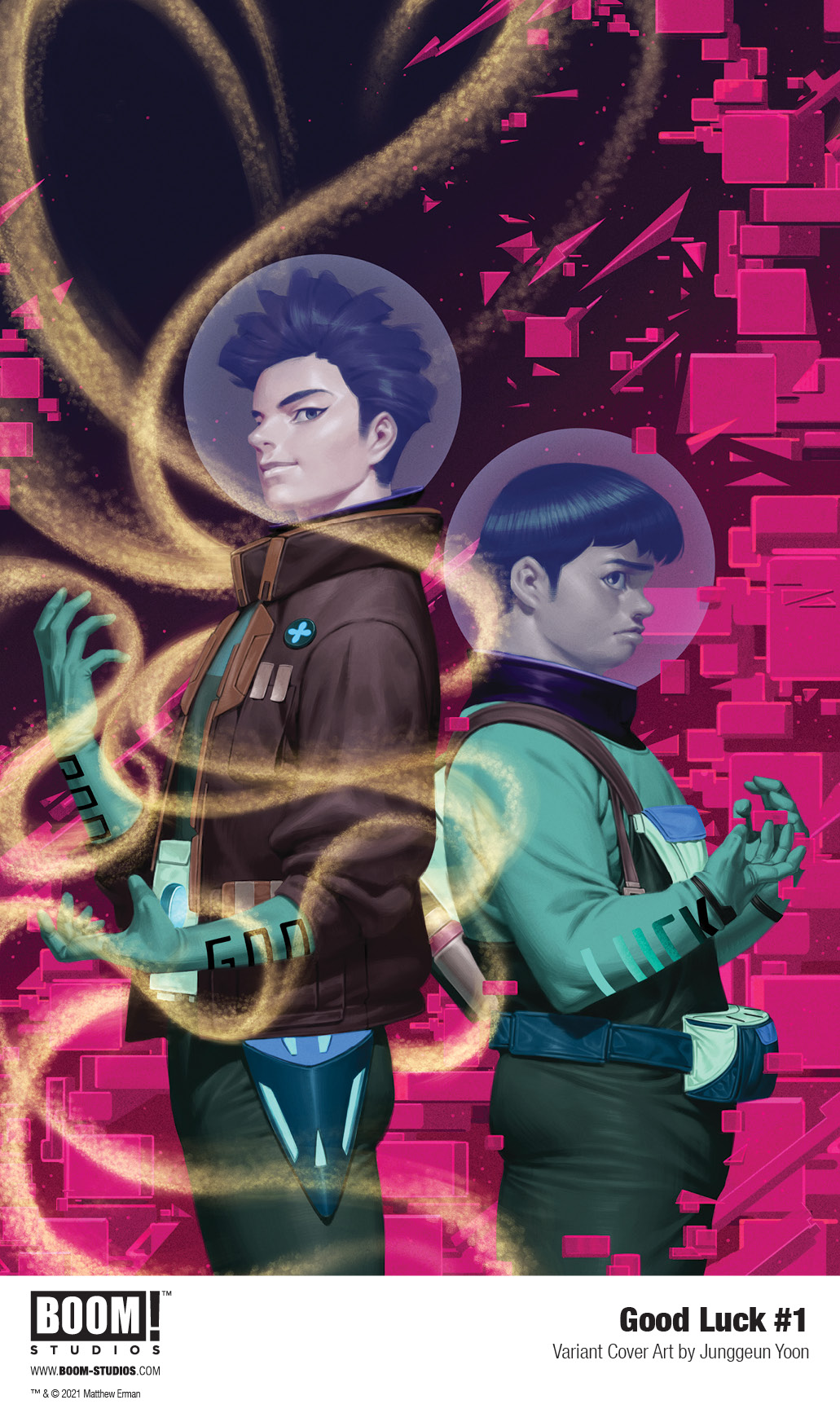 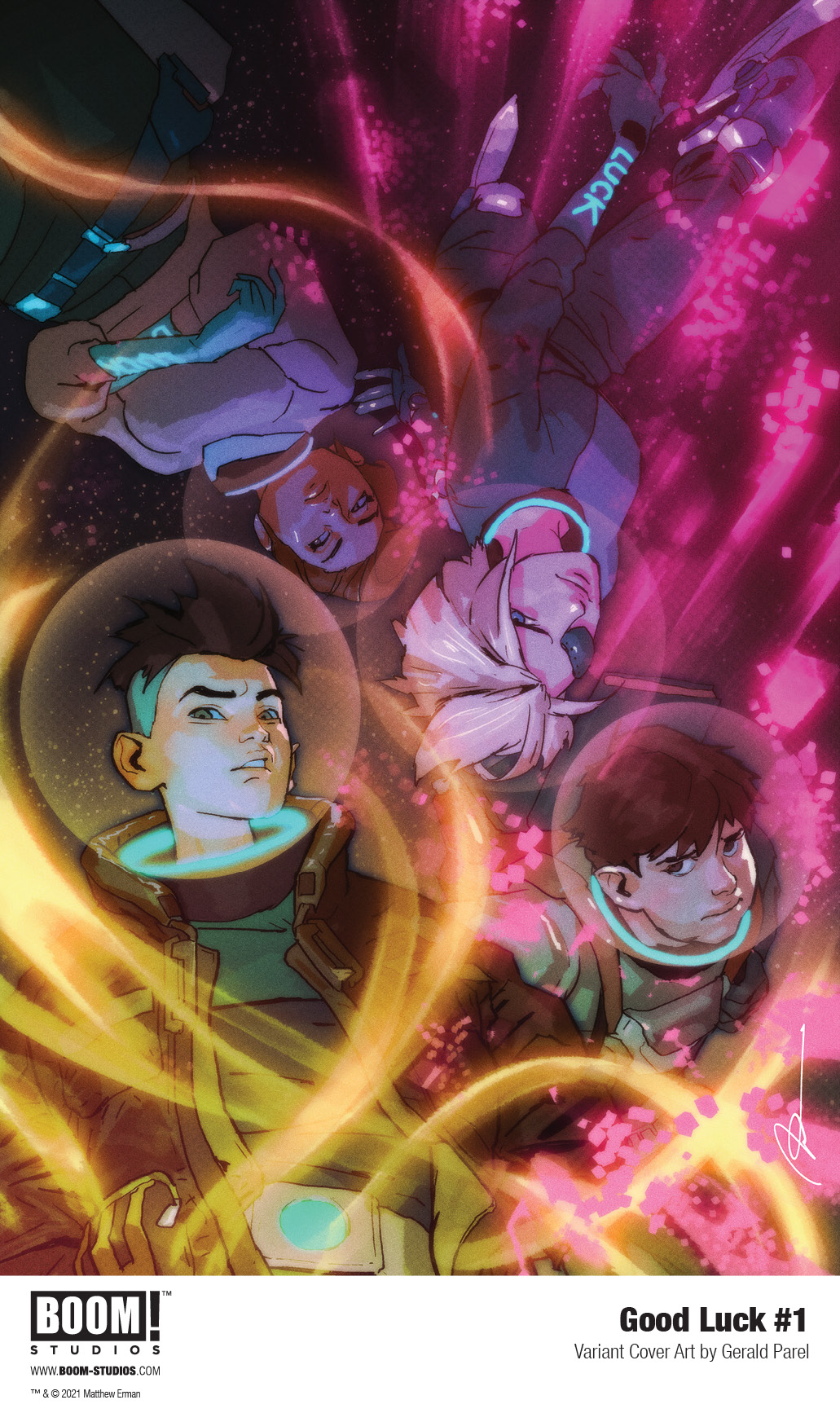 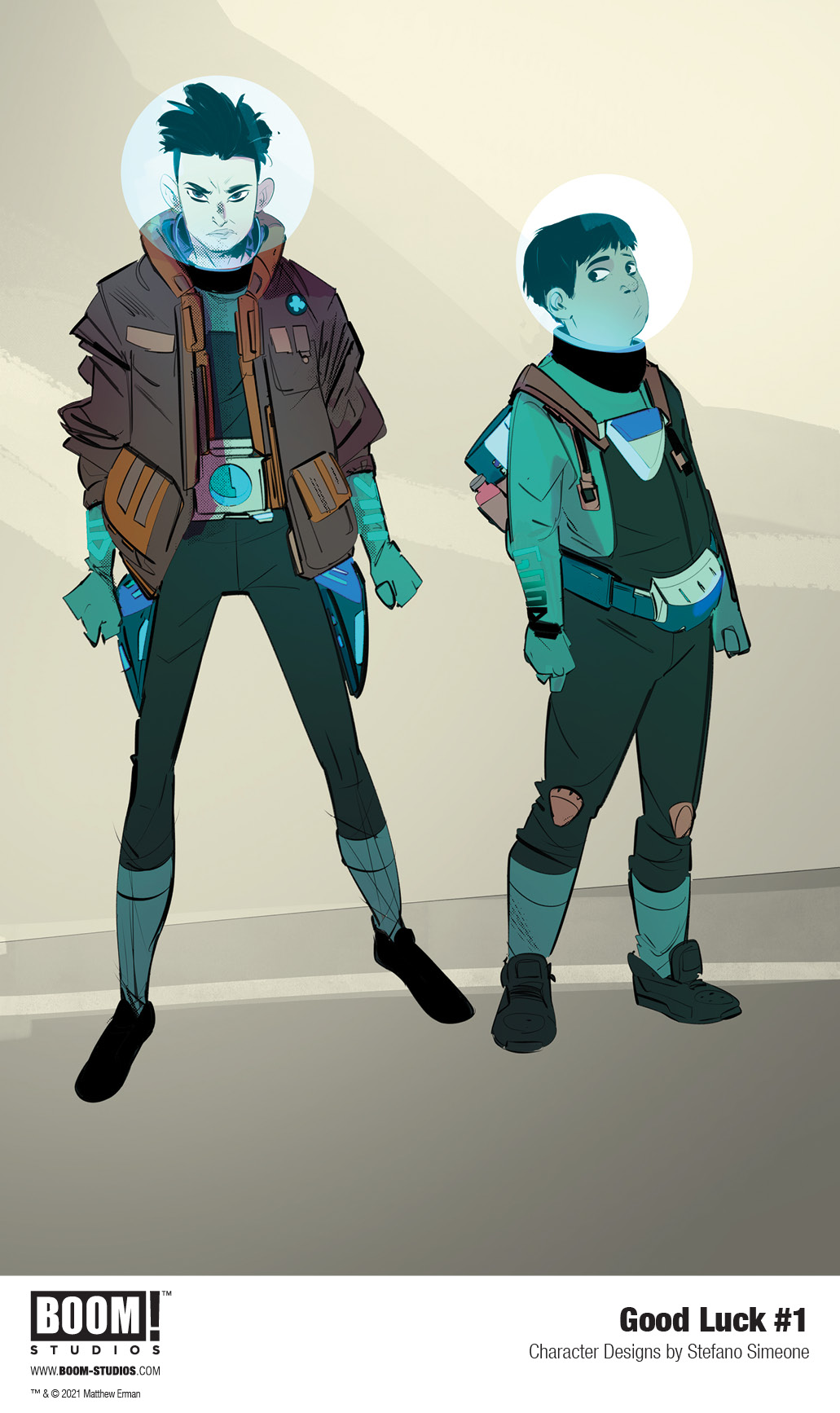 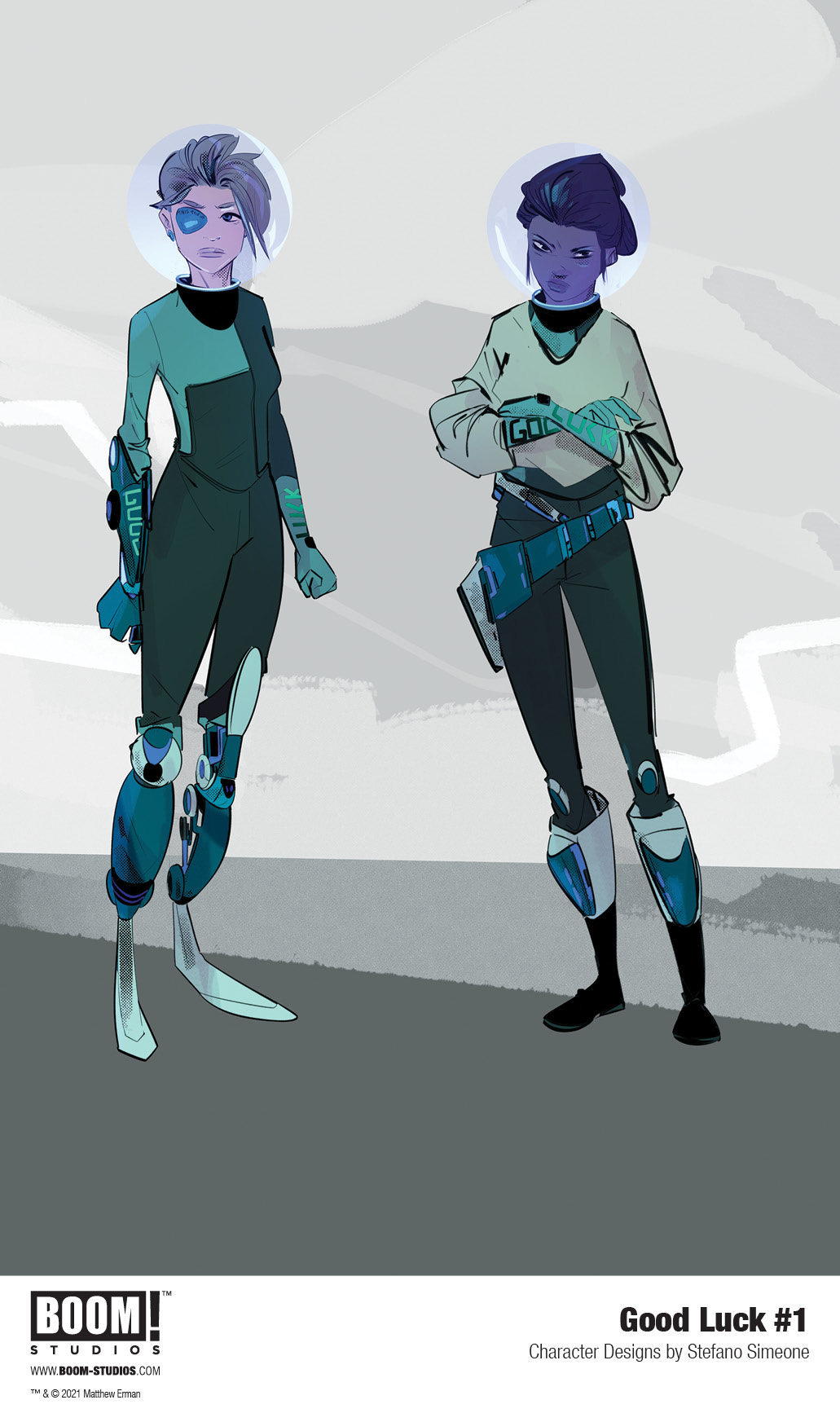