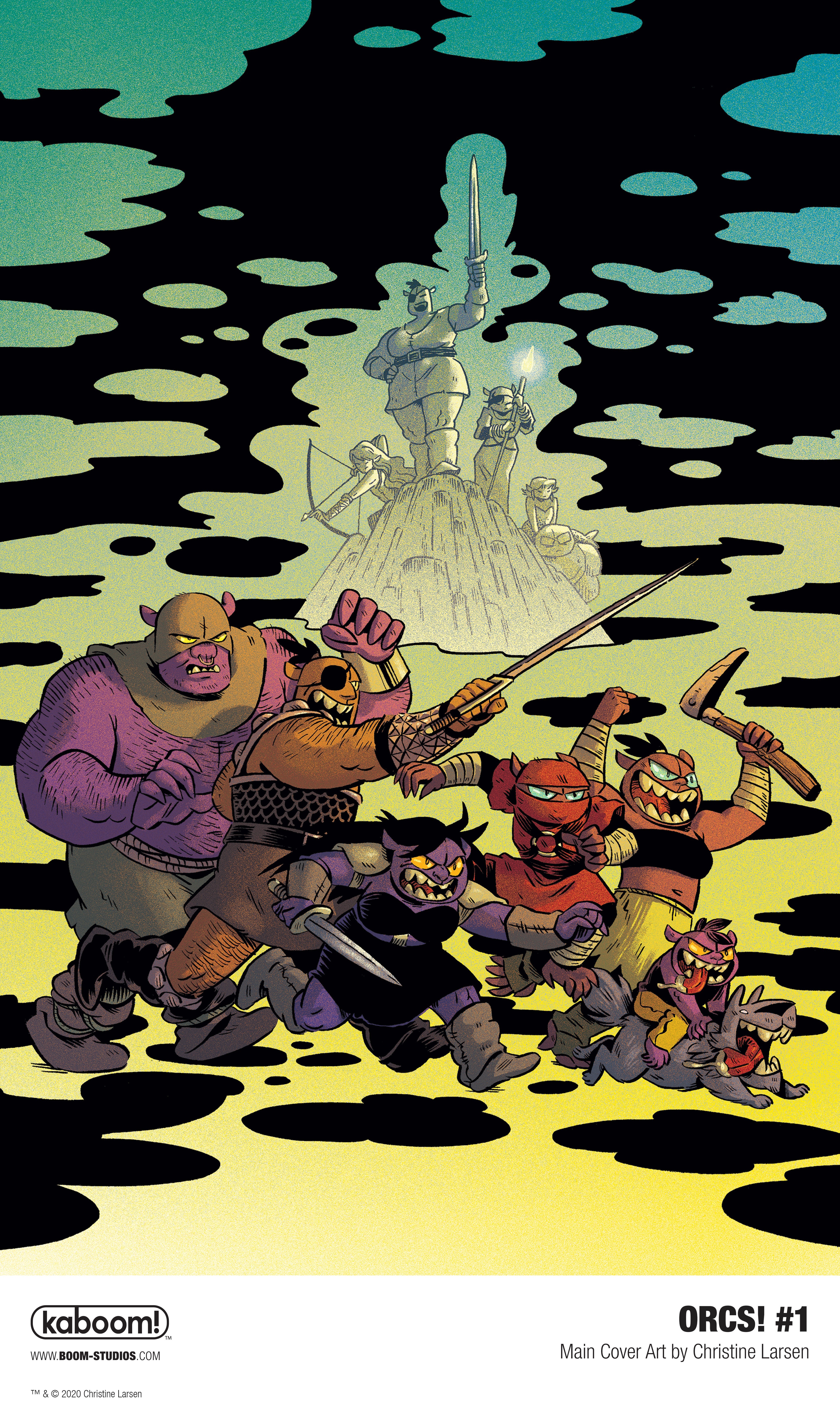 LOS ANGELES, CA (November 18, 2020) –  BOOM! Studios today announced an all-new original six-issue comic book series, ORCS! by cartoonist Christine Larsen (Adventure Time, By Night), about a band of misfit Orcs who set off into the great, wide Known World in search of glory and gold but find that the real treasures were the friends they made along the way.

The Adventure Starts Here! Join Bog and his crew, who were banished from their Orcish village by King Hrograhgah (it was a simple misunderstanding, involving an acorn-related prank!) and must now venture out into the world to seek their fortune and hopefully, one day, find their way back home again! Bog, Zep, Pez, Utzu and Gurh’s many adventures will find them entering the dreaded Eerieasallhel Forest, facing off against Trolls, Gnomes, squirrels and more, and even following in the footsteps of the legendary Orc hero, Dod One-Eye!

Christine Larsen is a Harvey Award-nominated cartoonist and Illustrator from Philadelphia, PA,  who creates art for comics, book covers, stories, posters and albums. She has worked with clients such as Dark Horse, Image Comics, IDW, BOOM! Studios, DC Online, and Simon & Schuster. In addition to numerous self published ventures, she is co-creator with John Allison on By Night! from Boom! Studios and has illustrated many licensed stories, including Samurai Jack from IDW and Adventure Time from BOOM! Studios. Larsen is also an adjunct instructor at the University of the Arts Philadelphia where she teaches illustration and comics.

“ORCS! is dedicated to everyone who’s taken an arrow from the hero, who wasn’t more than a nameless menace in the story, who didn’t have the looks for the main role—the quirky sidekicks, goofy henchmen, and army of lackeys,” said Larsen. “Goons are heroes, too!”

“Christine Larsen brings a wicked sense of humor and incredibly fun illustrations to this series about the misunderstood characters from your typical fantasy quest finally getting a chance to step up and be the heroes of their own story,” said Shannon Watters, Senior Editor, BOOM! Studios. “If you’ve ever played Dungeons & Dragons, read a fantasy novel, or played an online quest and wondered about all the characters left in the dust, ORCS! is the story you’ve been waiting for.”

Print copies of ORCS! #1 will be available for sale in February 2021 at local comic book shops (use comicshoplocator.com to find the nearest one) or at the BOOM! Studios webstore. Digital copies can be purchased from content providers, including comiXology, iBooks, Google Play, and Madefire. 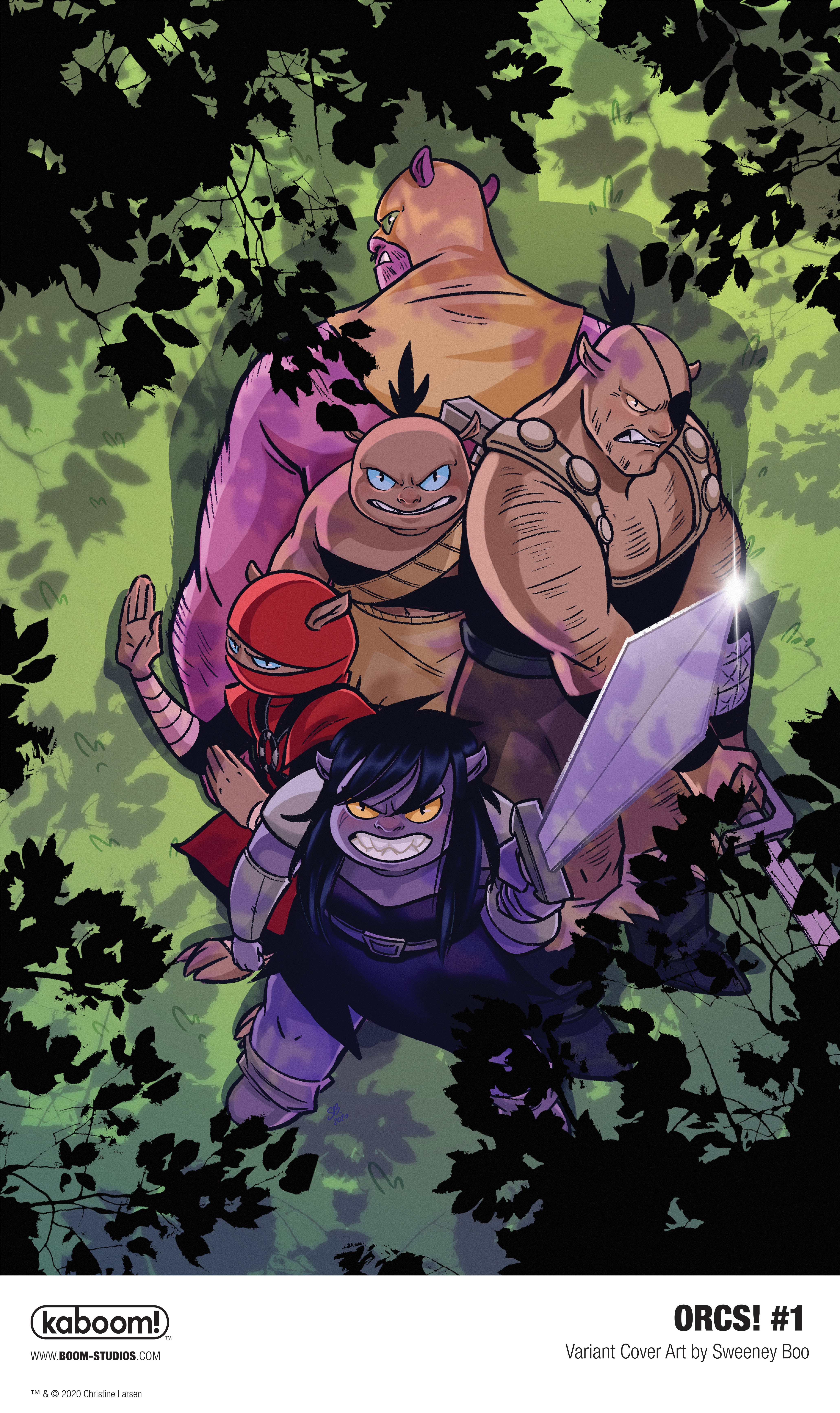 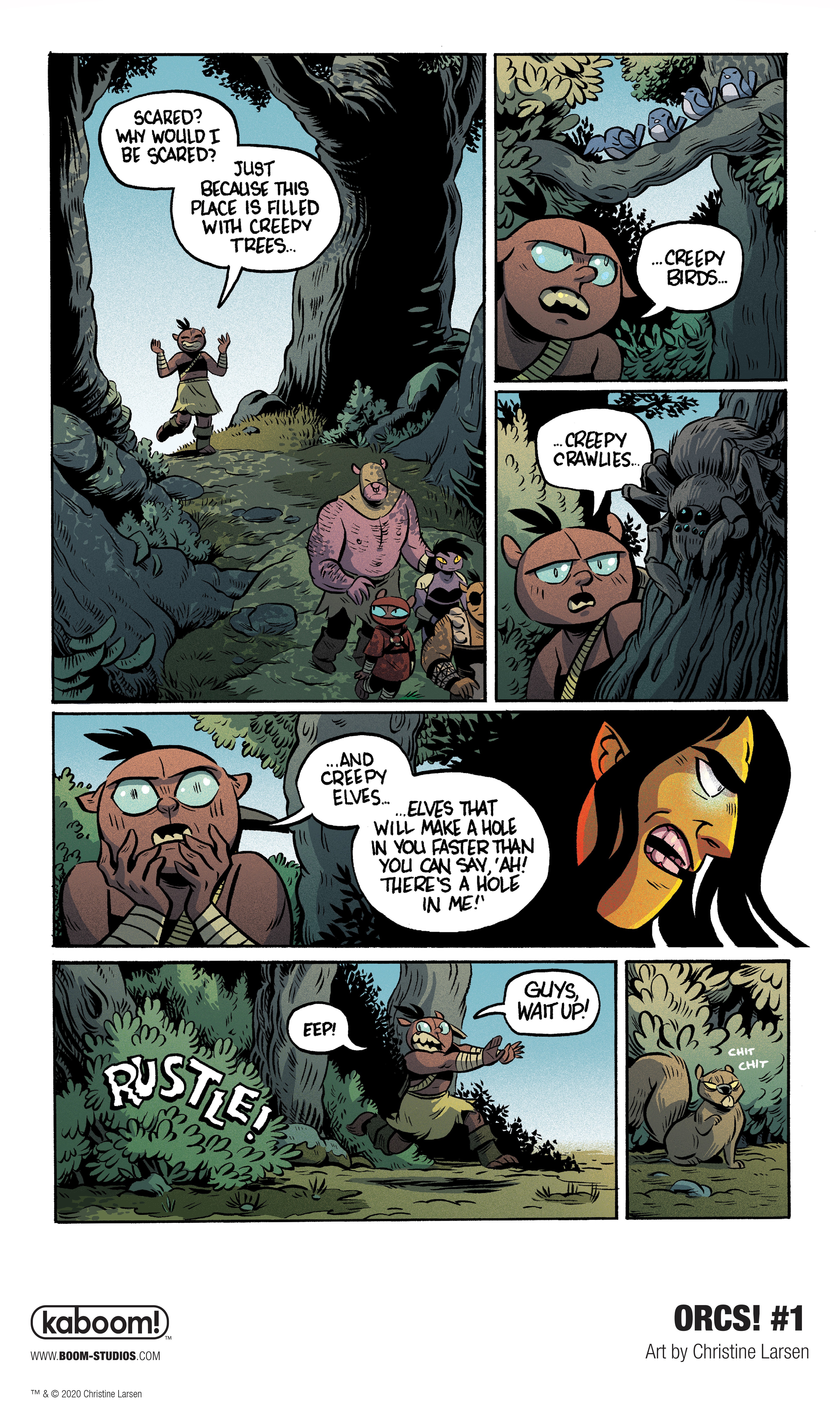 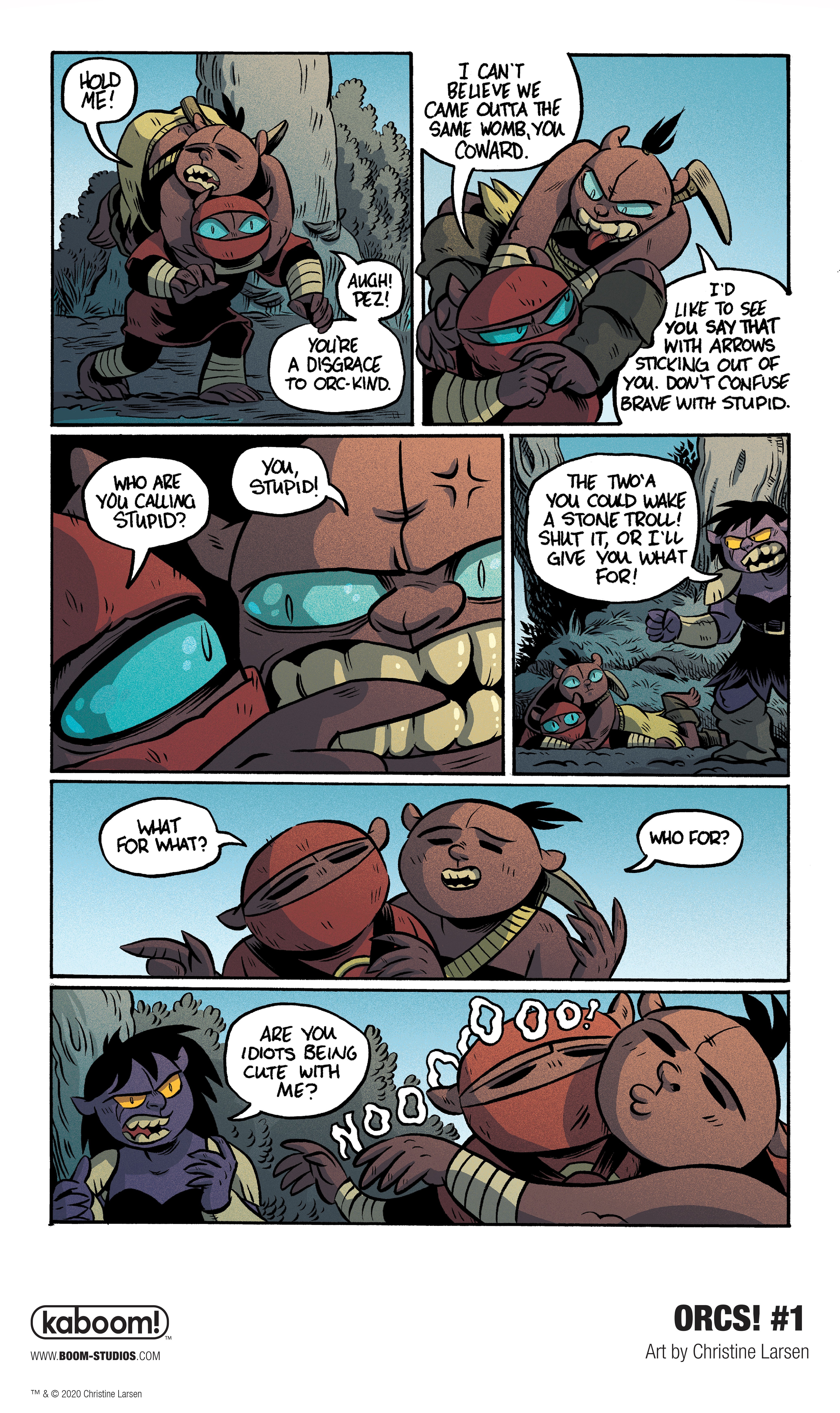 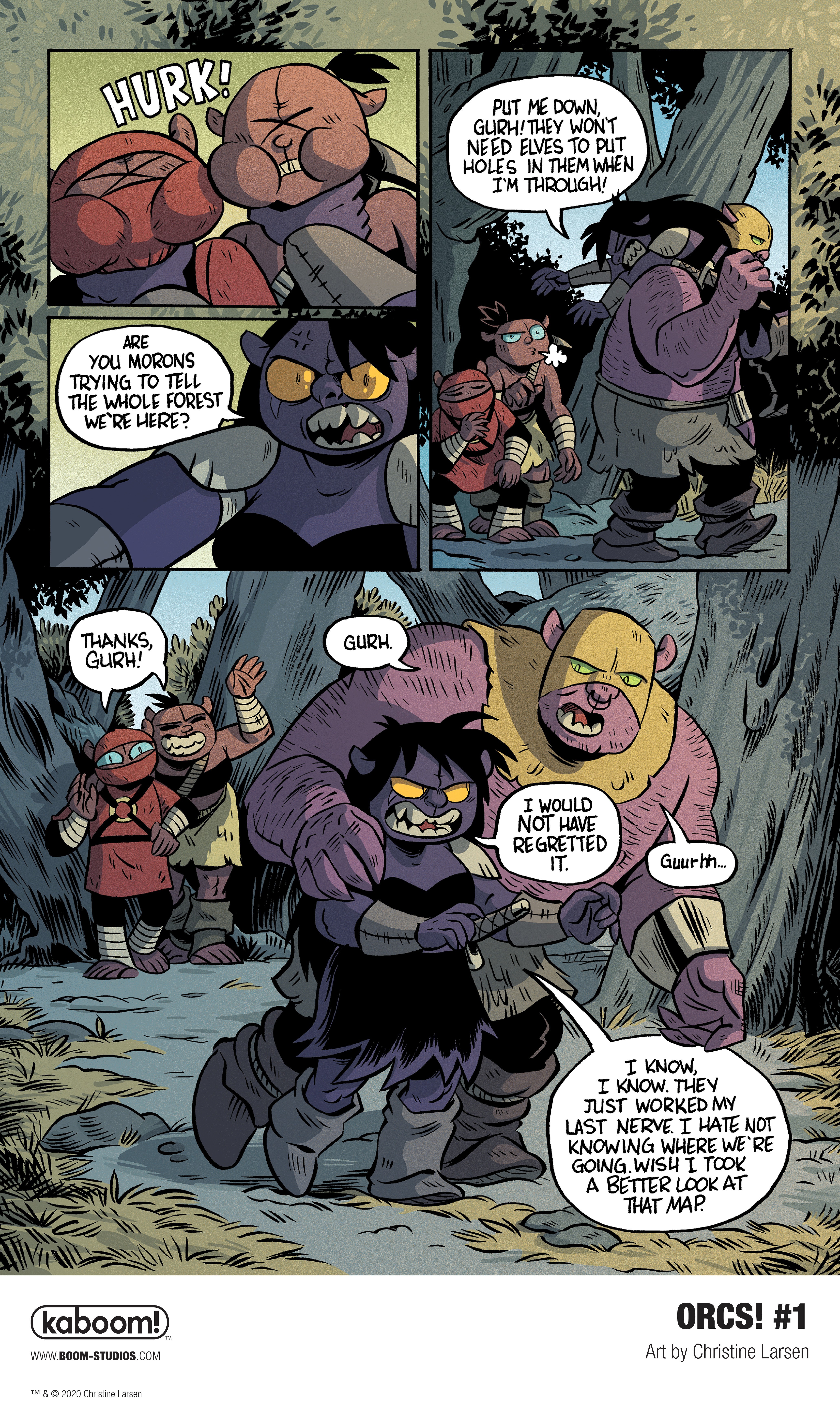 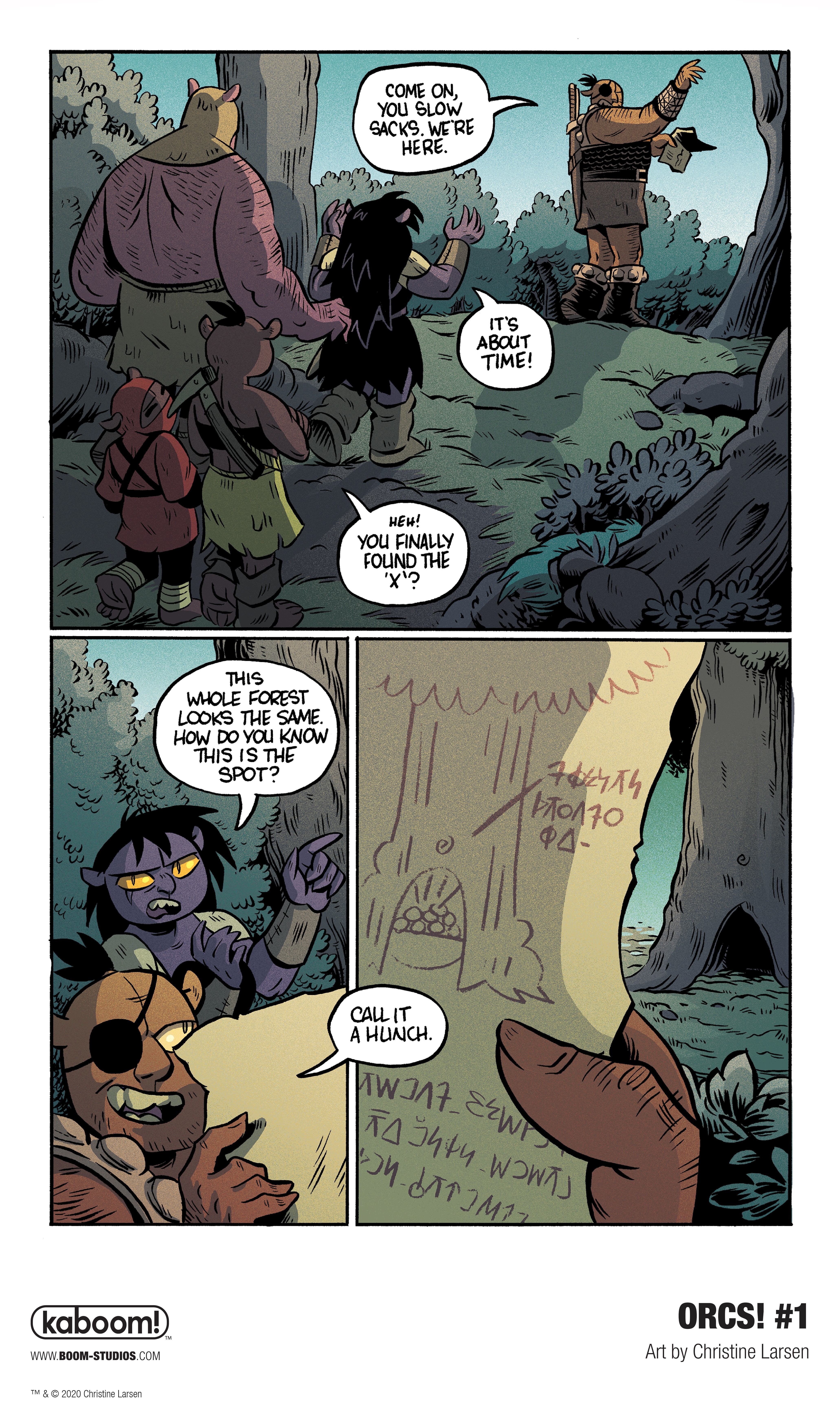