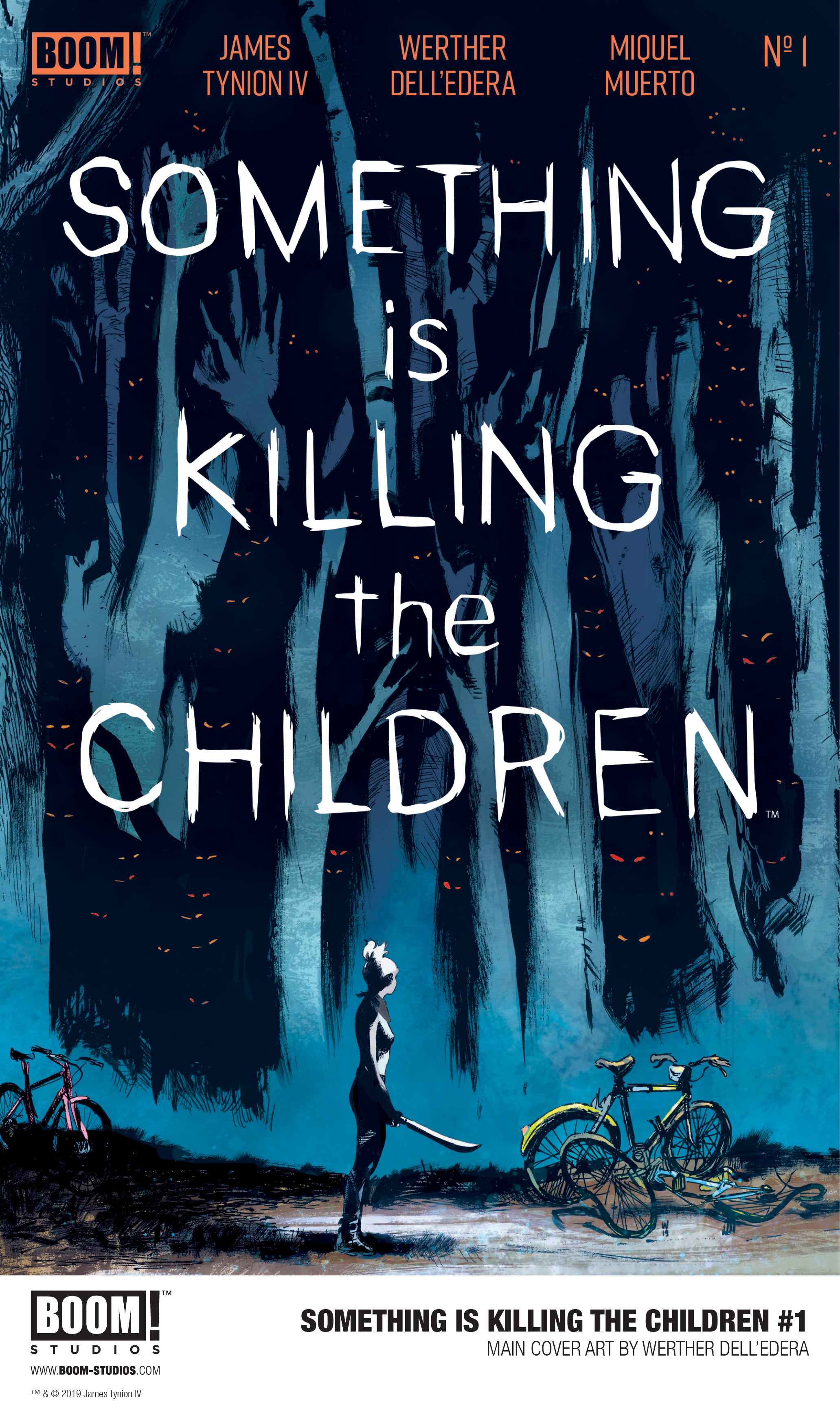 LOS ANGELES, CA (August 8, 2019) – BOOM! Studios today revealed a new look at SOMETHING IS KILLING THE CHILDREN #1, an all-new original series from GLAAD Award-winning author James Tynion IV (The Woods, Justice League) and artist Werther Dell’Edera (Briggs Land) about a close-knit community rocked by a series of murders and the first appearance of Erica Slaughter, a mysterious figure who rides into town claiming she can stop the brutal murders turning their community upside down.

But the local police and authority figures don’t know what to make of this dangerous outsider who claims to believe the local kids and their rumors of monsters in the woods. Can they trust this so-called “monster” hunter with their children’s lives? Or is Erica Slaughter an unhinged killer who’ll only bring more tragedy into their community?

SOMETHING IS KILLING THE CHILDREN is the newest release from BOOM! Studios’ eponymous imprint, home to critically acclaimed original series, including Once & Future by Kieron Gillen and Dan Mora; Faithless by Brian Azzarello and Maria Llovet; Abbott by Saladin Ahmed and Sami Kivelä; Bury The Lede by Gaby Dunn and Claire Roe; Klaus by Grant Morrison and Dan Mora; and the upcoming Folklords by Matt Kindt and Matt Smith. The imprint also publishes popular licensed properties including Joss Whedon’s Firefly from Greg Pak and Dan McDaid; Buffy The Vampire Slayer from Jordie Bellaire and David Lopez; Angel from Bryan Edward Hill and Gleb Melnikov; and Mighty Morphin Power Rangers from Ryan Parrott and Daniele Di Nicuolo.

“SOMETHING IS KILLING THE CHILDREN is a chilling portrayal of the kind of horror that hides just under the surface of our world and what happens when we can finally see the monsters around us,” said Eric Harburn, Senior Editor, BOOM! Studios. “James and Werther have created a new horror series that will make you question everything you can see — and what you’re terrified might be able to see you.”

Print copies of SOMETHING IS KILLING THE CHILDREN #1 will be available for sale September 4, 2019 exclusively at local comic book shops (use comicshoplocator.com to find the nearest one) or at the BOOM! Studios webstore. Digital copies can be purchased from content providers, including comiXology, iBooks, Google Play, and the BOOM! Studios app. 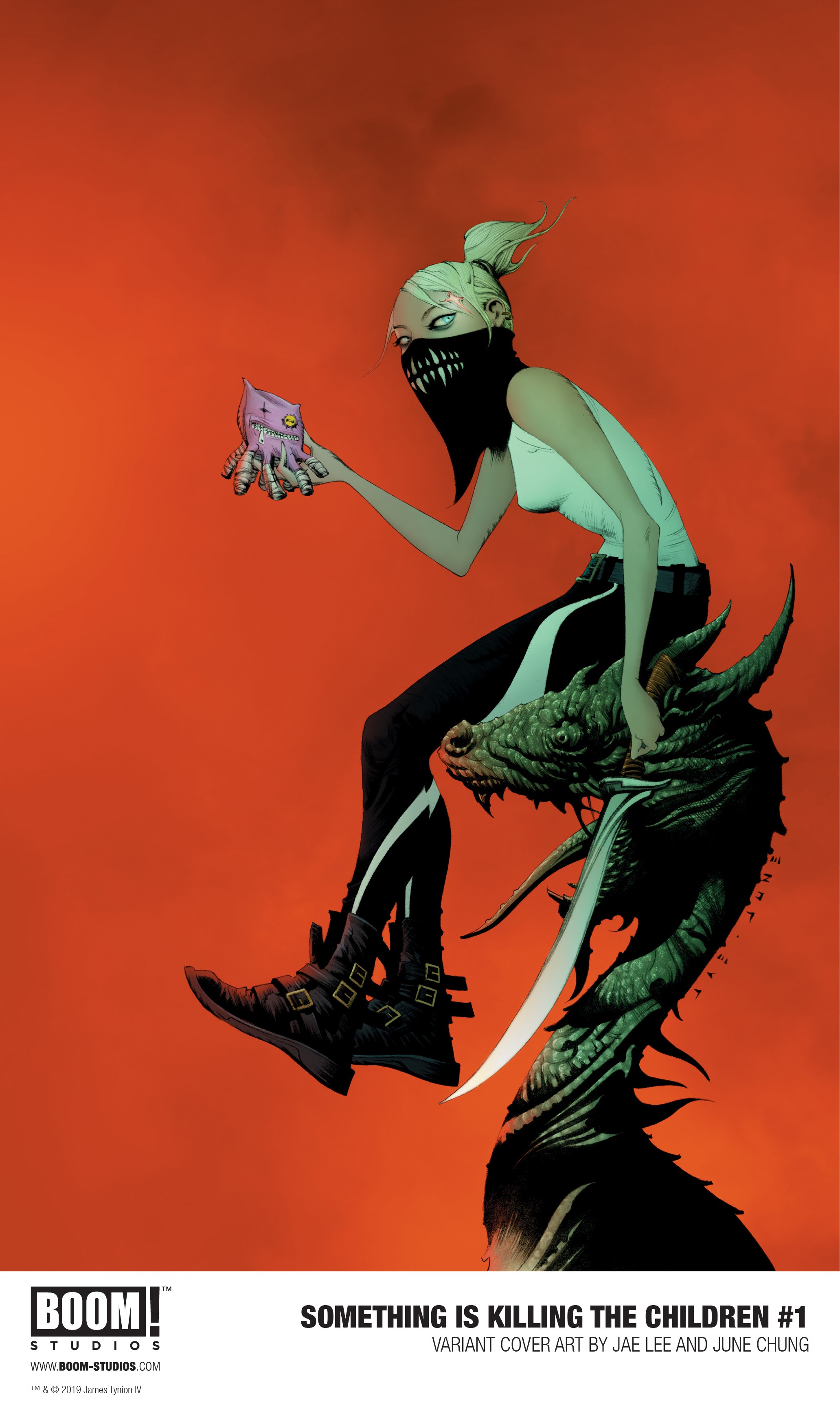 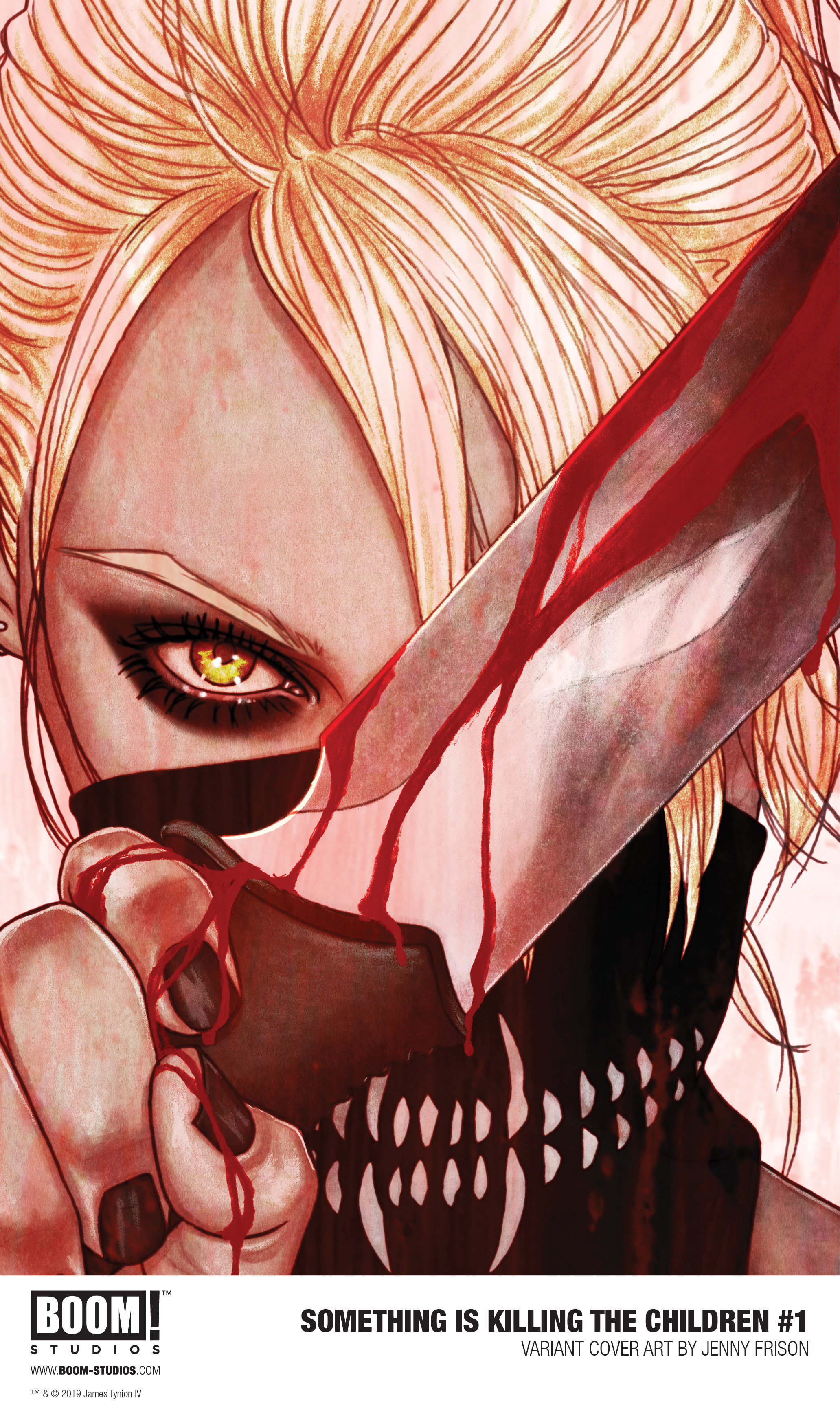 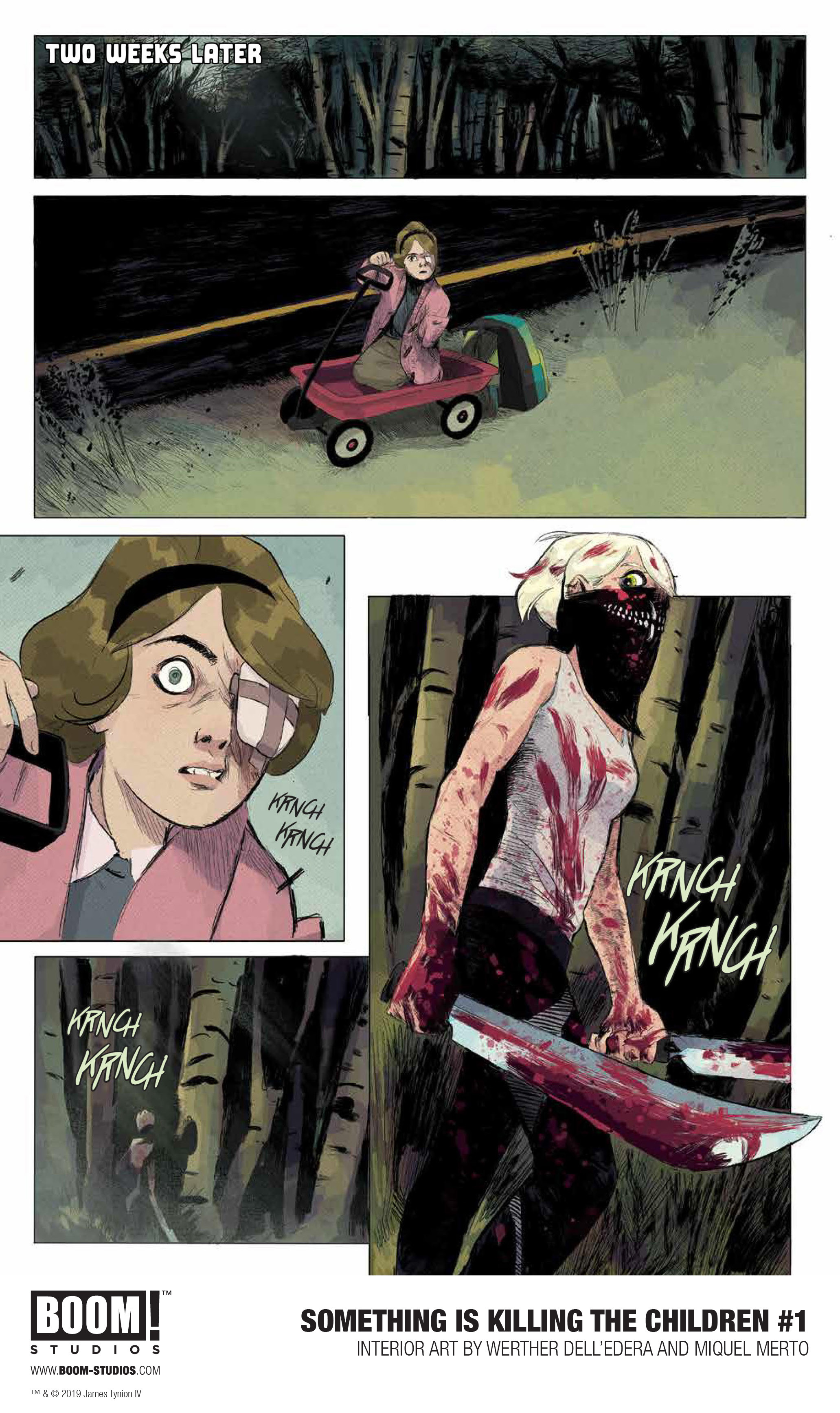 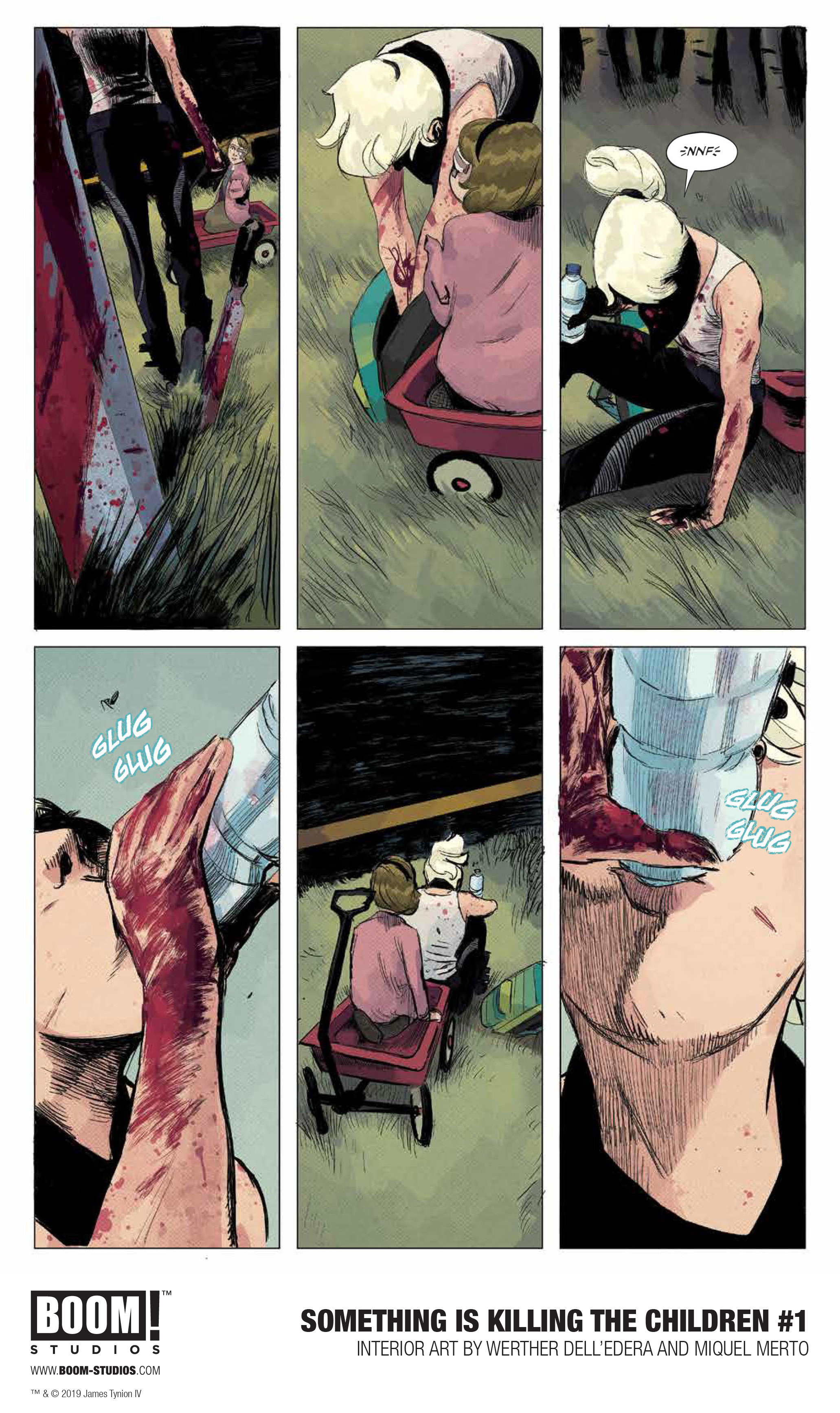 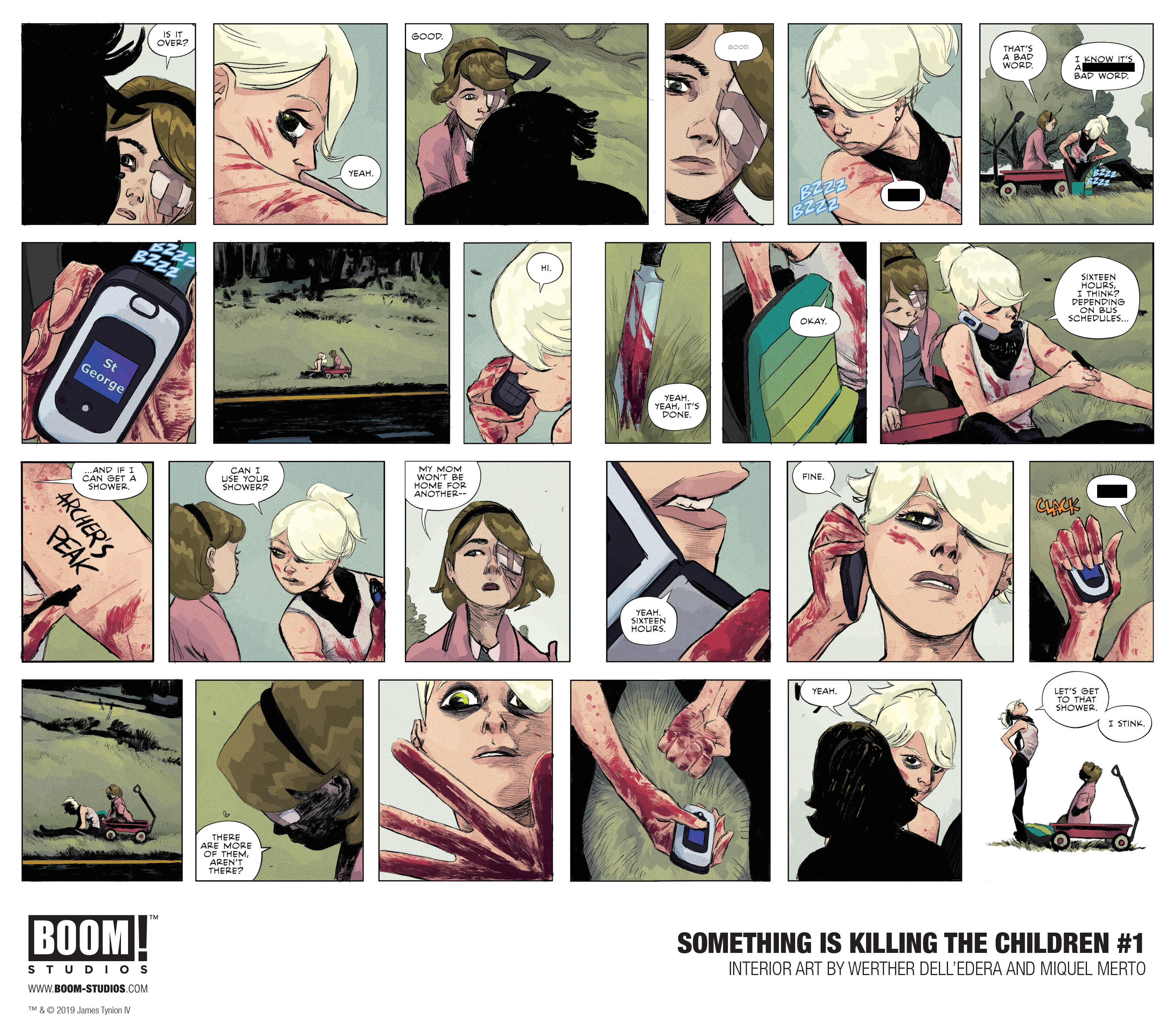