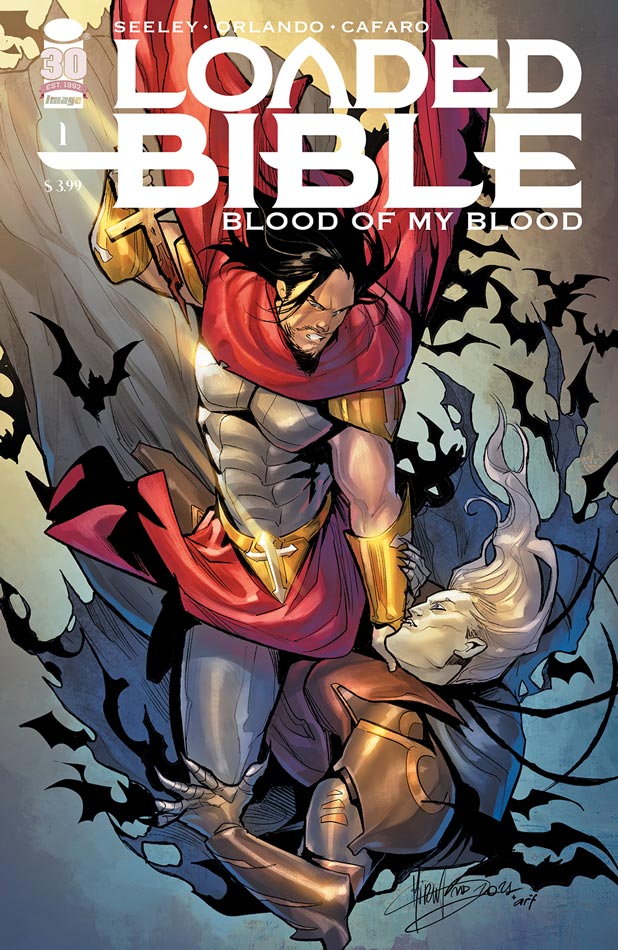 “Loaded Bible is a work that’s always been close to my heart,” said Seeley. “I’ve wanted to do more with it for a decade or more, but it was Steve Orlando who pitched me the idea that convinced me our vampire-hunting Jesus deserved a big comeback. Throw in the amazing artists at Arancia, and you’ve got a beautiful modern take on the saga of a cloned messiah and the church that bent his teachings to their will.”

Orlando added: “I’ve loved Loaded Bible since it first debuted, years ago. To me, this is what comics have always been about: exciting, provoking, and entertaining our readers! Here was a book whose headline was bound to get attention, and still will—but inside, I found a hard-hitting adventure about compassion and hope, with plenty of punches to the face along the way. For this estranged Milton student, there was no question that Jesus could be a blockbuster hero. This is grindhouse pop culture, it has been since its inception. But at its core, gonzo as it is, it’s a celebration of a lone protector at the end of the world, who risks his life every day to defend love, defend compassion, and crush hypocrisy and cruelty wherever it hides.”

In Loaded Bible: Blood of My Blood, decades after the events of the original cult series, Jesus’ vampire-hunting clone is a bigger outlaw than ever, and now, he faces a threat like no other. It’s the guardian of the forsaken versus the forsaker himself. Because this time, the church has cut a deal with the vampire nations to unite under their resurrected savior—Dracula!

“It’s amazing to be with Tim and Steve on this project!” said Cafaro. “Especially if is an ultra-violent and super fun book for Image Comics!”

Loaded Bible: Blood of My Blood #1 (Diamond Code JAN220108) will be available at comic book shops on Wednesday, March 2. Regular covers are illustrated by fan-favorite Mirka Andolfo, and some incredible variant covers will be announced soon.

Loaded Bible: Blood of My Blood #1 will also be available for purchase across many digital platforms, including Amazon Kindle, Apple Books, and Google Play.