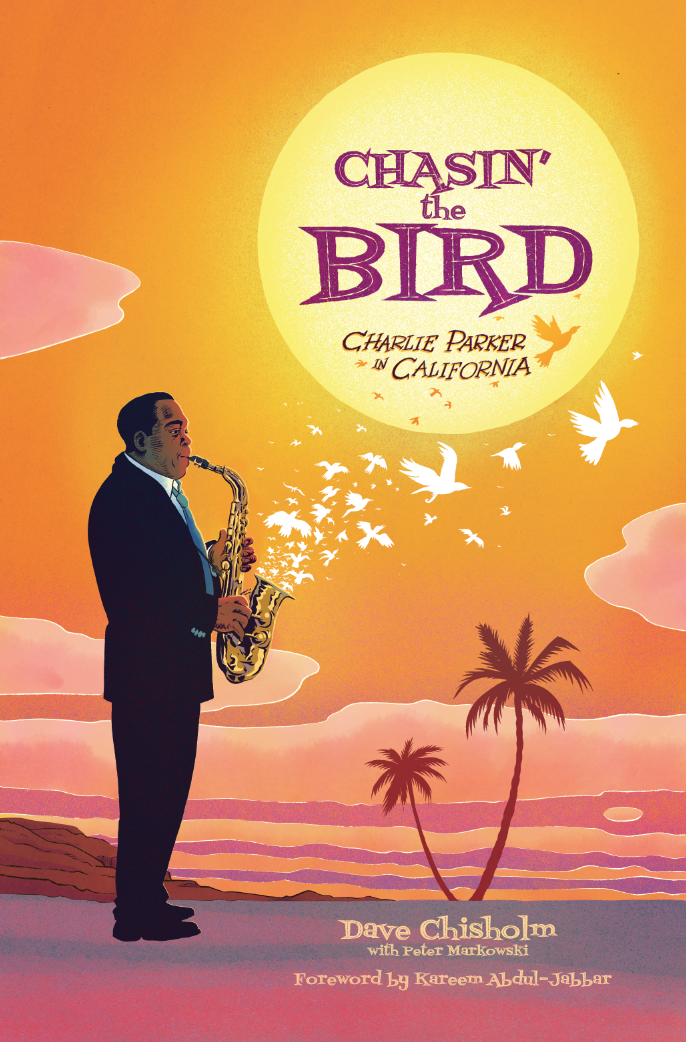 NEW YORK, NY—In honor of the 100th anniversary of Charlie “Bird” Parker’s birth, the life of the jazz icon will be told in the pages of an upcoming graphic novel to be released by Z2 Comics in late September, now with an introduction by basketball and cultural icon Kareem Abdul-Jabbar.

During his short life, Bird changed the course of music. He was a pioneering composer and improviser who ushered in a new era of jazz and influenced subsequent generations of musicians, writers and artists. Music industry legend Quincy Jones once said, “I believe that a hundred years from now, when people look back at the 20th century, they will view Bird, Miles and Dizzy as our Mozart, Bach, Chopin and Tchaikovsky.”

Similarly, Kareem Abdul-Jabbar’s time in the NBA will remain one of the most celebrated eras in the history of the sport itself. Jabbar, a 6x world champion, holds the record as the NBA’s All-Time Leading Scorer, boasting 38,387 points in his twenty-year career. Since retiring in 1989, he has gone on to become a celebrated New York Times-best-selling author, filmmaker, ambassador of education, columnist and cultural commentator. As a social justice activist, Kareem was awarded The Presidential Medal of Freedom, our nation’s highest civilian honor by former President Barack Obama. As a student and Jazz historian, Kareem’s voice is the perfect introduction to the world of Charlie Parker in California.

“Chasin’ the Bird, a phenomenal graphic novel…becomes an archeological dig into the legend that was Bird—and the man that was Charlie Parker” says Kareem Abdul-Jabbar. “What is especially impressive is how Dave Chisholm and Peter Markowski capture in words and art, the spirit of Bird’s music, rooted in the traditions of classic music but reshaped into his own—and their own—personal expression. It is the universal quest each person embarks on to find their unique voice.”

This groundbreaking graphic novel tells the story of Bird’s time in L.A. starting in December 1945, where Bird and Dizzy Gillespie brought frenetic sounds of bebop from the East Coast jazz underground to the West Coast for a two-month residency at Billy Berg’s Hollywood jazz club. This marked the beginning of a tumultuous two year-stint for Bird bumming around L.A., showing up at jam sessions, crashing on people’s couches, causing havoc in public places, and recording some of his most groundbreaking tracks, “A Night in Tunisia” and “Ornithology,” as well as “Relaxin’ At Camarillo,” inspired by the end of his time in SoCal at the Camarillo State Hospital. The novel explores Bird’s relationship with the characters and events he encountered during his time in L.A. including recording some of his signature songs with Dial Record founder Ross Russell, a brief but influential stay at the home of famed jazz photographer William Claxton, a party for the ages at the ranch home of artist Jirayr Zorthian, and others who found themselves in the orbit of the jazz genius.

“This is one of the greatest projects we have ever had the privilege to be a part of” says publisher Josh Frankel. “The passion that Dave and Peter put into this work is unparalleled, and to add the words of one of the most prolific cultural critics, let alone one of the greatest athletes in history is truly humbling for all of us. We are certain that this is destined to be one of the graphic novels of the year, if not a high watermark for the decade ahead.”

Chasin’ The Bird is being released during the centennial of Bird, dubbed Bird 100, as one of the many initiatives celebrating the extraordinary career of the trailblazing jazz icon, including exciting new music releases, festivals and events, prestigious exhibitions, special partnerships, exclusive collectible art, and myriad of independent appreciations and concerts. This special graphic novel, named for Charlie Parker’s 1947 standard, and adapts one of the sunnier, but darker chapters in the life of Bird, and is available for preorder now directly through the Z2 webstore. The deluxe limited edition includes a vinyl 45, and both are released in conjunction with a new album from Verve Records/UMG spanning Bird’s L.A. period. The details of the tracks accompanying the graphic novel, and the upcoming album will be announced soon.

About Charlie Parker:
If jazz history can be divided into two epochs — danceable swing and improvisational bebop — then Charlie Parker is the fault line. During his brief but remarkable career, the alto saxophonist nicknamed “Bird” gave jazz lightning tempos, mind-bending chord substitutions, and previously unexplored harmonic depth, paving the way for hard bop, free jazz, fusion and everything after. Miles Davis summed up his accomplishments: “You can tell the history of jazz in four words. Louis Armstrong. Charlie Parker.” Parker, who died in 1955 at only 34, was a meteoric musician that burned bright and much too quick. But his legacy more than lives on; it’s jazz scripture. Jack Kerouac called him “as important as Beethoven.” Four of his recordings were inducted into the Grammy Hall of Fame including albums Charlie Parker With Strings and Jazz At Massey Hall and the songs “Ornithology” and “Billie’s Bounce.” In 1974, he was awarded a posthumous Grammy for Best Performance By A Soloist for “First Recordings.” In 1988, the Clint Eastwood-directed biopic “Bird” brought his story to the silver screen. The U.S. Postal Service issued a commemorative stamp in his honor in 1995. The Parker composition “Koko” was included in the National Recorded Registry in 2002, declaring the song as “culturally, historically, or aesthetically important, and/or inform(s) or reflect(s) life in the United States.” Although his life and career were short, the New Yorker has praised Parker as “one of the wonders of twentieth-century music” and the New York Times deemed him “matchless” and a “bebop exemplar.” Parker’s popularity continues to grow as the world celebrates the 100th birthday in 2020.

About Kareem Abdul-Jabbar:
Kareem Abdul-Jabbar made a name for himself with his un-blockable Skyhook which helped him become the NBA’s all-time leading scorer. Kareem’s mantra is: “I can do more than shoot a ball through a hoop, my greatest asset is my mind.” Growing up under the two biggest media spotlights in the world (New York and Los Angeles) during the Civil Rights era as quite literally the most visible black man in the country has given Kareem a unique perspective on America’s political and social landscape. This viewpoint has allowed him to make a significant impact in today’s political and pop culture.  Kareem is also known as jazz historian with a lifelong love for the music.

About Z2 Comics:
Z2 is the premier destination for top quality music-based comics and graphic novels, having worked across genres to deliver an authentic experience to diverse audiences. Some of the publisher’s best-selling books include Apocrypha: The Legend of BABYMETAL, YUNGBLUD Presents: The Twisted tales of the Ritalin Club and Eden: A Skillet Graphic Novel, alongside debut works of graphic fiction by Dan Auerbach (The Black Keys), Andy Biersack (Black Veil Brides), DJ Paul Oakenfold, internet sensation Poppy, jazz trumpeter Dave Chisholm and others. Z2’s upcoming works include books created with partnership with The Grateful Dead, Sturgill Simpson and others.

About Jampol Artist Management:
Jampol Artist Management, Inc., which has been an effective and discerning steward for such legends as The Doors, Janis Joplin, Ramones, Charlie Parker, Jim Morrison, John Lee Hooker, Johnny Ramone, The Mamas & the Papas and Jefferson Airplane, utilizes all available platforms to connect fans new and old with their clients and provide new avenues for discovery and exploration. JAM Inc.’s work on behalf of its legacy clients includes feature and documentary films; worldwide retail apparel and licensing campaigns; powerful uses in film, TV and other media; innovative use of social media; stage productions, museum exhibitions, books and more. 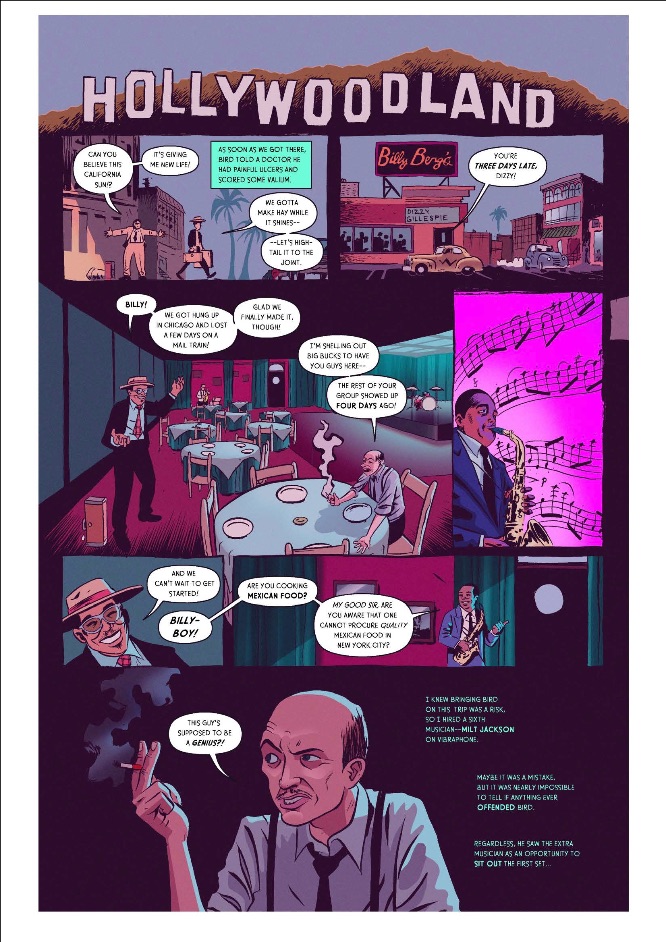