Set for Release in Spring 2022 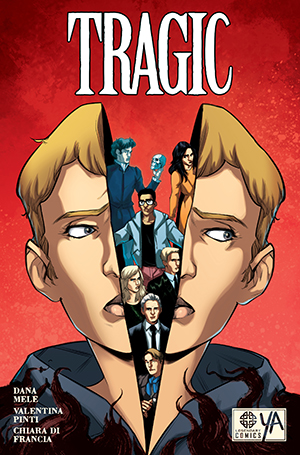 Tragic is told through the eyes of 17-year-old Harper Hayes. After her father Hamilton dies a mysterious and tragic death, Harper is convinced that he was murdered, and her first suspect is her uncle, who has been sleeping with her mother. With the help of her ex-girlfriend Talia and her best friend (sometimes with benefits) Holden, Harper is determined to find her father’s killer. But when Caius, Talia’s father and Hamilton’s business partner, is also found dead, Harper realizes the answer to Hamilton’s murder is more complicated than she had initially realized. As Harper begins to see her father’s ghost in the form of a teenage Hamlet everywhere and starts slipping into hallucinations of his murder that end with blood on her hands, one thing becomes clear—in order to uncover the truth about what happened to her father, Harper has to confront her own demons and ones that haunt the Hayes family.

“It has been great to work with Dana on bringing a new queer version of Hamlet to the page, and Tragic is such an intriguing retelling,” said Nikita Kannekanti, Editor of Legendary Comics. “Valentina and Chiara have done a fantastic job capturing the human and theatrical elements in the vivid art of this tale, and I am really looking forward to sharing Harper and her messy life with readers.”

“Tragic is a YA thriller family drama mashup with an intensely visual presentation,” said Dana Mele. “I was inspired by a story very close to my heart, Shakespeare’s Hamlet. Years ago, I played Hamlet in college and what I love about retellings is the familiar heartbeat of a beloved story in sometimes a strange or quirky, unexpected form. I’ve always seen Hamlet as a queer character, as someone with a deeply intimate relationship with Horatio. And if Hamlet were written today, I think it would be a psychological thriller, so that’s the story that came about organically. Tragic, in essence, is about anxieties surrounding identity, obligation, and mortality.”

Dana Mele’s Tragic is the latest project announced by Legendary Comics that joins a growing slate of upcoming visionary and inclusive YA stories. Other titles include: Championess (based on the real-life bare-knuckle boxer Elizabeth Wilkinson in eighteenth century London from Tarun Shanker and Kelly Zekas); The Heart Hunter (exploring immortality, love, and greed from novelist Mickey George and artist V. Gagnon); Lupina (a six-part captivating saga about a young girl on a journey of revenge with her wolf companion from Eisner Award-nominated writer James F. Wright and artist Li Buszka); and The Witches of Silverlake (following Elliot Green and his coven of queer, teen witches in Los Angeles from singer-songwriter Simon Curtis).