After a couple of years as an indie comics publisher, editor, and author—a couple of years that involved reading a lot of other indies—I have enough natural arrogance to feel like G-Man Comics is actually competitive, in terms of quality, with the big companies, in the general case. There are very few zines being published today that I enjoy as much as I do ours, and the best of our fellow indies. But…

BUT: not all. There are major company zines that I enjoy completely. And three of them are written by the same guy! Tom Taylor is truly a brand of excellence.

And Bruno Redondo is magnificent. His art is clean and simple like the best comics of my youth. He uses shape and space to compose beautiful pictures. He uses visual dynamics, techniques like the Deluca effect (multiple images of the same character in a single frame), design, layout, and beautiful pictures to bring a story alive both narratively and emotionally.

He collaborates masterfully with colorists, combining his shading and screen-tones with their colors to create a look that is both classic and leading-edge at the same time. Adriano Lucas compliments him superbly. His colors are largely flat like classic comics, but with a thoroughly modern palette, but offset with gradients, shading, and dry-brush techniques in a way that is so restrained, that they provide the detail and texture needed to keep the art interesting and nuanced, and not an iota more.

Nightwing is pretty much my prime candidate for the best comic being published today, but Superman, Son of Kal-El, and Dark Knights of Steel, along with Adventureman and Fine Print aren’t far behind. They’re the books I want Taranis, Invictus, and Agent Kirby to be nipping at the heals of. 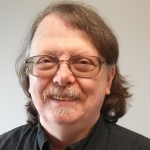 Jim Burrows is the ghost in the Hero Machine. He hangs out with Demon Priests. In his spare time, he writes comics and novels as well as editing and doing all the production work at G-Man Comics.