“I’m a huge fan of Frank Thorne’s work, especially on the Red Sonja Series!,” said Jim Balent. “Although I will never surpass his depiction of this She-Devil With a Sword, I could not pass up this opportunity to illustrate one of my favorite covers he created. I consider this a huge honor to have my cover on his iconic issue.”

“Lush and glamorous, romantic, goth and melodramatic… as a teen, all of these qualities pulled me into Vampirella’s world,” said Holly Golightly. “I wanted to be her best friend and join her in all her adventures. It’s a dream come true to share my passion for her and Jose Gonzalez’s art through my cover with other Vampi fans!“ 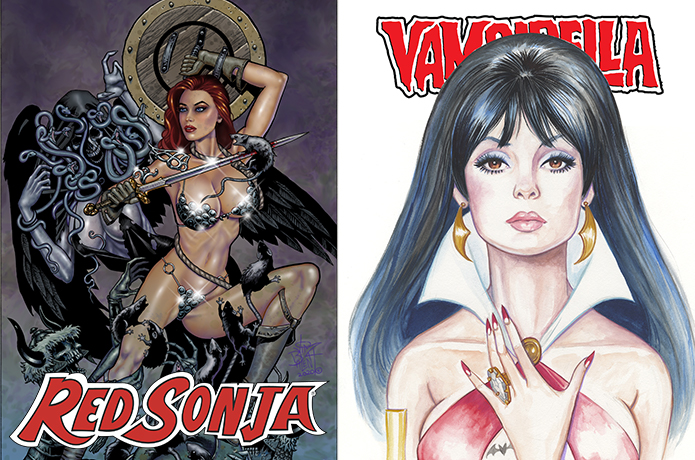 This is actually a very special project for both Balent and Golightly, who have long been fans of these iconic characters and that influence is seen in their styles and work to this day.

Holly was such a big fan of Vampirella, and particularly the sensual stylings of her definitive 1970s artist Jose Gonzalez, that she used an image of the Drakulonian for her high school graduation yearbook page! As she navigated growing up and honing her artistry, Holly identified with the outsider nature of Vampi and the macabre horror of those original stories. Her favorite issue was the 1972 Annual, which featured a deep roster of top artists across 64 pages like Gonzalez, Wally Wood, Jeffrey Catherine Jones, Neal Adams, and more. Which is why her exclusive new art is adorning a limited-edition printing of that issue and at magazine size!

On the other hand, Jim Balent taps into his “Barbarian Jim” persona to channel the legendary strokes of Frank Thorne for a Crom-ful classic new cover. Fans should make sure to watch the promo video to see Jim in his full barbarian glory. His Red Sonja cover pays homage to Thorne and Bruce Jones’ “Eyes of the Gorgon” story, originally published in 1976 in Marvel Feature #4. His cover will be gracing a stunning limited edition of that classic story.

Each cover is being offered in three main variations. Balent’s comes standard with traditional trade dress, as a virgin logo-free edition, or a black and white line art variant. Holly’s comes standard, with the line art, or as a special alternate version she designed to homage pop art pioneer Patrick Nagel, known for his striking portraits of women. Fans can get combo packages of the covers, CGC graded copies, signed editions, or even remark sketches from Holly. She’ll also be doing a limited number of truly one-of-a-kind sketch covers – in full color! 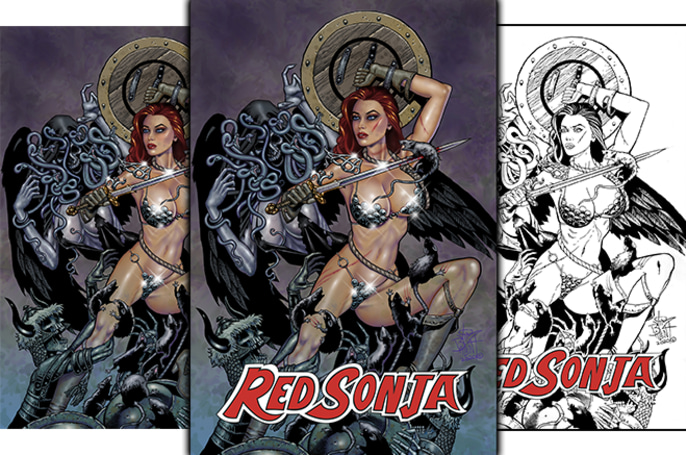 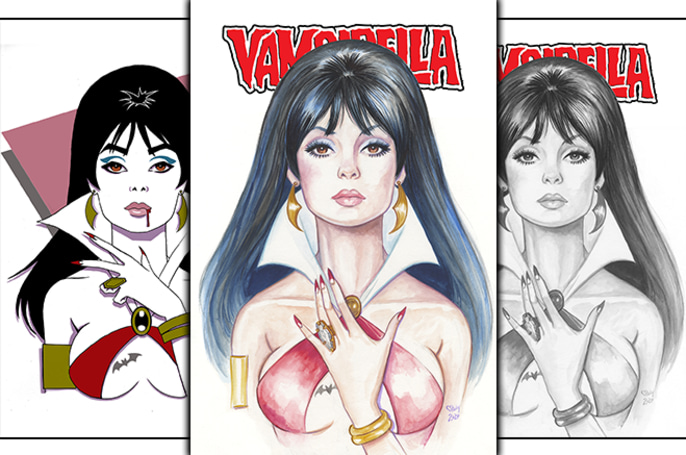 Trading card sets for each cover represent all the editions, the original inspiration issue, and a fun behind the scenes photo of each artist’s process. Tee shirts, lithograph prints, and collectible coins round out this overflowing extravaganza of Vampi and Sonja celebration! 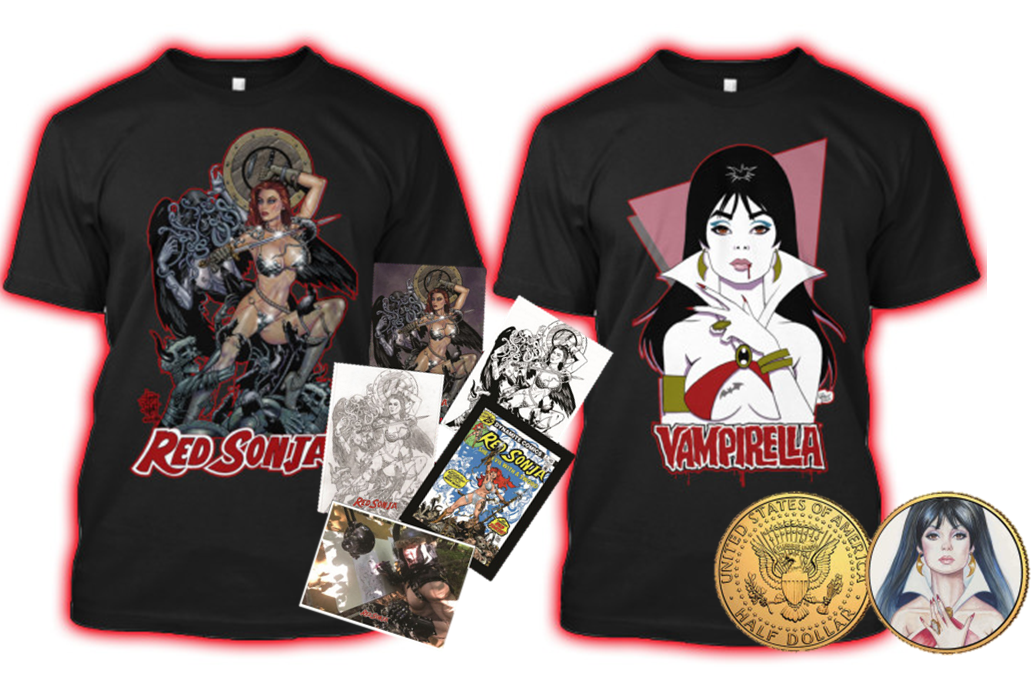 Jim Balent is a 35 year veteran of comics, establishing himself at the forefront of the “bad girl” movement in comics nearly right off the bat. His Dynamite DNA goes way back, with some of his earliest work being inking the Vampirella: The Dracula War story arc early into the Harris era, and drawing Purgatori’s first solo series with Chaos! Comics. In 1993 he kicked off a new Catwoman series at DC, which still stands as her longest-running. Jim drew over 80 issues in a row over a 7-year run, intersecting with fan-favorite crossovers like Knightfall and No Man’s Land, and even a tussle with Vampirella! Characters like Catwoman, Vampi, Purgatori, and Billy Tucci’s Shi lead the way as the most popular comics of the 1990s began to star kickass women.

Holly Golightly kicked off her comics career with her own bad girl creation, Vampfire. She’s also balanced the scales and shown off her versatility on the “good girl” end with a plethora of stories for Archie Comics on everyone’s favorite Riverdale teens. This includes a fan-favorite run on Sabrina the Teenage Witch, a natural match for Holly – a practicing witch!

In 2000 the duo turned their attention to the indie scene and launched BroadSword Comics. Their flagship title Tarot: Witch of the Black Rose will be celebrating a whopping 125 issues at the end of this year. The pair collaborate on the series with Jim writing, drawing the interiors and covers, while Holly colors, letters and handles production for the character inspired by her.

Z2 COMICS AND ICE NINE KILLS TEAM UP TO BRING THE SILVER SCREAM TO THE PRINTED PAGE FOR INKED IN BLOOD!