Such a great conversation.

Le’me get there first.

Not sure if you understand what this means.

Literally, my reason for living—as in, being alive—cause, probably would have killed myself by now; never saw myself past 30.

I’m a die old as fuck—just have to get there.

But, seriously—con saves my life.

I need the energy.

Plus, my life revolves in 7 month cycles—with a complete melt down every 3.5 months; and, a mini freak out about half that.

I’m a good person, mostly—but, I’ve chosen to be.

Though, I want you all to burn regularly—you’re welcome for your lives.

It’s hard to empathize with humans when I feel so much—and, everything hurts.

I’m not human—because, I don’t want to be—humans are mean; and gross; and ugly.

Not saying I can’t be a cunt…

I mean, I DID just tell 3 friends to fuck off and die…

So, Youmacon… I knew Great Lakes was Feb.

Knew, had 3 months between fixes.

…how to fill my time…

While maintaining a roof over my head and food—means, jobbie—then; some sort of social interaction—because, one of me is an extremely social creature.

I hate money—really is the stupidest thing humans ever created.

So, I got up with Jody and cemented working the MAGIC gaming section with him—big for me—as it will be my forth con worked, I need the experience.

Plus, I learned how to play MAGIC 2 years ago at this very con.

I feel this is an achievement.

And—proud of myself—as long as I can hold it together for 11 more days.

But, this coming weekend is Planet Comicon.

Lisa wants me to get John Cusack to autograph her copy of High Fidelity—is her favorite fucking movie.

And, looking forward to seeing a friend in KC.

Got a gig working at Four Story Burger in Emagine Theater, December, banquet serving holiday parties and made bank.

Not being able to smoke on property at work is actually helping.

I made enough $ to float me through Jan. after they fulfilled reservation obligations, then closed the restaurant—sigh…

So—January in Michigan is cold—I’m from Florida;  spent most of 2017 in San Diego, Ca. 5 winters my entire life…

Went RAWR RAWR and was pissed off by everyone in my immediate circle.

I’m a fucking bitch—at times—and asked everyone to leave me alone.

Told everyone I was rawr—how is it my fucking fault?!?!?

540 words and still no smokey…

I also haven’t moved from this spot.

Nor, am distracted by other things.

Writing saves me life too…

Anyway—met Casey Wheeler of Comics, Beer and Sci-fi at the theater and worked out the trip to KC…

At some point during the month of Unemployment aka January aka constant distractions of StarWars: Galaxy of Heroes, Phone Destroyer and Last Day of Survival to prevent implosion aka mind blowingly sober—mostly—And; 9gag has saved my life—saw a post about Astronomicon and added for the February Hat Trick.

Three weeks leading up to con were hell.

Fought with all my friends—to the point I have to move out.

And—told several to fuck off and die.

Saw a picture of Well on FaceBook posted by a mutual friend—total gut punch—his eyes glitter in perfect lighting; which seems to be always.

Now, I can’t get him back out of me head…

I’m sure I’ll have a very rude awakening about it being really over at some point sooner than later but I’m currently perfectly complacent in this fool’s paradise for the moment.

I mean, I still feel the fucking ring on my finger.

So, I ask Chad, 1 of 3 hosts, GEEK-A-Pedia. PodcastDetroit.com if he wanted to go with me.

A) Needed a ride.

B)I needed him to take photos of this con so I can write this article and he can submit for C2E2 and go with me as contributing press because, I’ve been doing this shit on my own for too fucking long and it’s getting expensive—not just financially, either—my kid’s 13th birthday was the 7th and I’m at a fucking con.

She didn’t talk to me for a week—and, now she’s not talking to me again.

In the hum of the machines, I’ve had nothing but time to think…

Since turned to Solomon’s Keep, Skyrim and went back to playing Gumballs and Dungeons after a serious hiatus—Wellford introduced me to the game, and it was one of our things…

This is my life rn…

Thursday, Lance and I went out after work.

Deposited my first check in the bank Friday of con on the way home from work.

Of course, they put a 5 day hold on that bitch so I had zero fucking money all weekend… sigh…

Chad was originally going to come over and crash Friday night but, my household is at arms and there was, like, 8 inches of snow…

Opted to drive over in the AM and would just crash at my place the one night to go Sunday as well.

So, we arrive at Wyndham Gardens, Sterling Heights.

Now, I had already put in a list of interview requests and basically their response was I had to get them myself.

Interview Eric Bischoff—check—but, we’ll get to that.

Find Motorcity Nightmares at their table—no check—apparently there was some last minute table shuffling and they got booted; though, I guess they were there at some point walking around.

Jason Mewes was a two day before show announcement—and, had this really great idea : )

So—on our Podcast last year, we had this segment called CHAD KOVACH SAYS ‘GO FUCK YOURSELF’ inspired by his telling to Stan Lee—whom totally deserved it.

So, I though, maybe, we could get Jay to call Silent Bob so we could all tell him XD

Jason showed up at 4:30PM with a line out the door, with his second signing at 7.

We walk in the door to immediately see Source Point Press to the right.

Saw a press release about them picking up Chris Callahan’s MISPLACED.

Met them at LACC 2016 and again at Wondercon 2017 after he attended my panel—they got total location fucked that con… seriously—whom ever designed the floor plan was clearly not thinking.

Making an entire isle facing the wall between the bathrooms and concession.

Saw another press release regarding SPP and asked dude about it.

Apparently, there is this other group, I think it’s a school—idk, I’m thinking about a million different things—who goes through the submission and editing process of first time comic creators to be published by SPP.

And, that I met this guy at SDCC 2017 in a group trying to get marketing firms to do exactly this.

Saw Bill and Dave, IT in the D second as we went right.

Now, I’m sure they think I’m a piece of shit.

Started a show—literally did one episode—then, I went to SDCC and stayed XD

They were cordial—but, we moved on quickly.

Far wall, rounded to the left for Celebs.

So, I had to tell him how the San Diego Downtown News wrote an article about me being a San Diego resident—which, I bounced, like, 3 weeks later XD… sigh…—used our picture.

Never got around to talking to Kevin or Scott—Bill agreed to an interview but on Sunday.

Eric Bischoff was so pleasant.

I told him how pleased I was to meet him and asked for an interview, which he said anytime—he was a bit busy though—so,we walked around a bit more just to see what was there.

Knew Dirk and Dom were in the middle and wasn’t emotionally prepared for that yet and skipped the isle.

And went to have a smoke…

This other dude was selling one for $250 XD

Of course, Edward Pevos of MLIVE has already submitted his article and Astronomicon shared it on Facebook.

I feel like if I don’t finish this, I won’t—I know myself well…

Bumped into him—actually, stalked him for a moment—after over hearing him say something about Motorcity Nightmares when I couldn’t find them and thought he might be with them.

But, nope—a reporter covering the con.

We’re now connected on Linked IN : )—gave me his “B card”—got that from MOXXI <3

Of course, I know this Character from chasing Well’s ass around the moon desert in Borderlands Pre-Sequel, “Bitch! Get in the truck.” Dying XD

Really don’t think I’ll ever laugh like that again, for anyone else.

He once made me laugh so hard I couldn’t breath at a roof top Hotel Pool party, the “life guard” came over to see if I was okay XD

You’d be surprised with how awful some of them are. 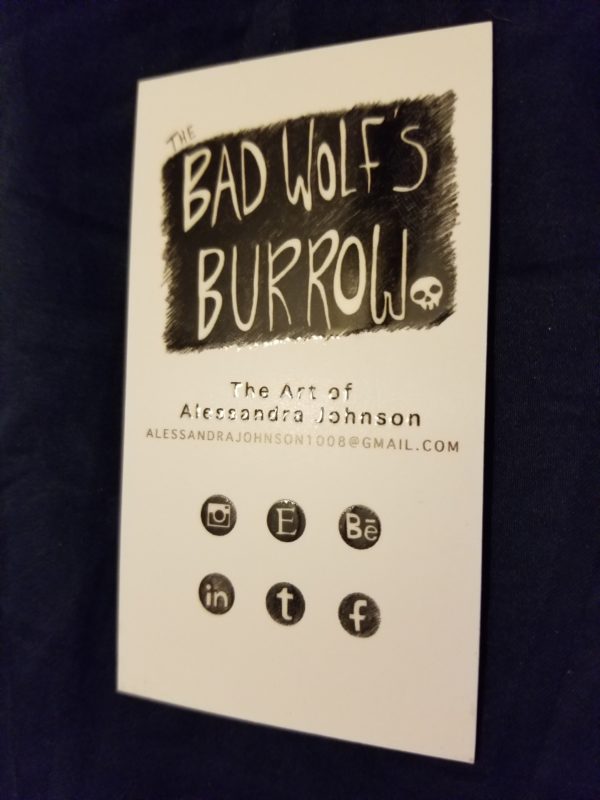 Alessandra Johnson is local Michigan Artist, out of Grand Rapids, I think.

In process of making some really cool deck cards I look forward to seeing completed.

Also, had a nice chat with Jerry Shirts, ARTISTIC AEROSOL.

Though, find him on facebook because he did a commission for cosplayer, I think, and her fans crashed his website XD

And, I can’t seem to find his Etsy.

But, his stuff really is lovely:

Apparently, he’s having a hard time with C2E2 this year—despite 8 years of previous exhibitor status in artist alley—because, they think he makes shirts XD

HE WOULDN’T BE ABLE TO GET THAT LEVEL OF DEPTH IF HE WASN’T A TALENTED ARTIST.

Anyway, I look forward to seeing him at MotorCity.

OMG. THE SCAREBEARS DUDE WAS THERE!!! <3

THESE THINGS ARE AMAZING <3

Father and son, being the Great grand son of the original owner.

Everything is hand made with quality ingredients—peanut butter cups were bomb.

I, ESSENTIALLY, GOT A PHOTOGRAPHY LESSON FROM EUGENE A. CLARK XD

Hope I was able to achieve what he was looking for—after cropping, of course.

So, I’m 2,200 words in, really need to eat and go to bed—work in 8 hours—still waiting on photos from Chad but I’m impatient and one for instant gratification so I’m going to post this anyway, without fucking editing…

He totally has a position on my cabinet.

I’m a slacker, you know…