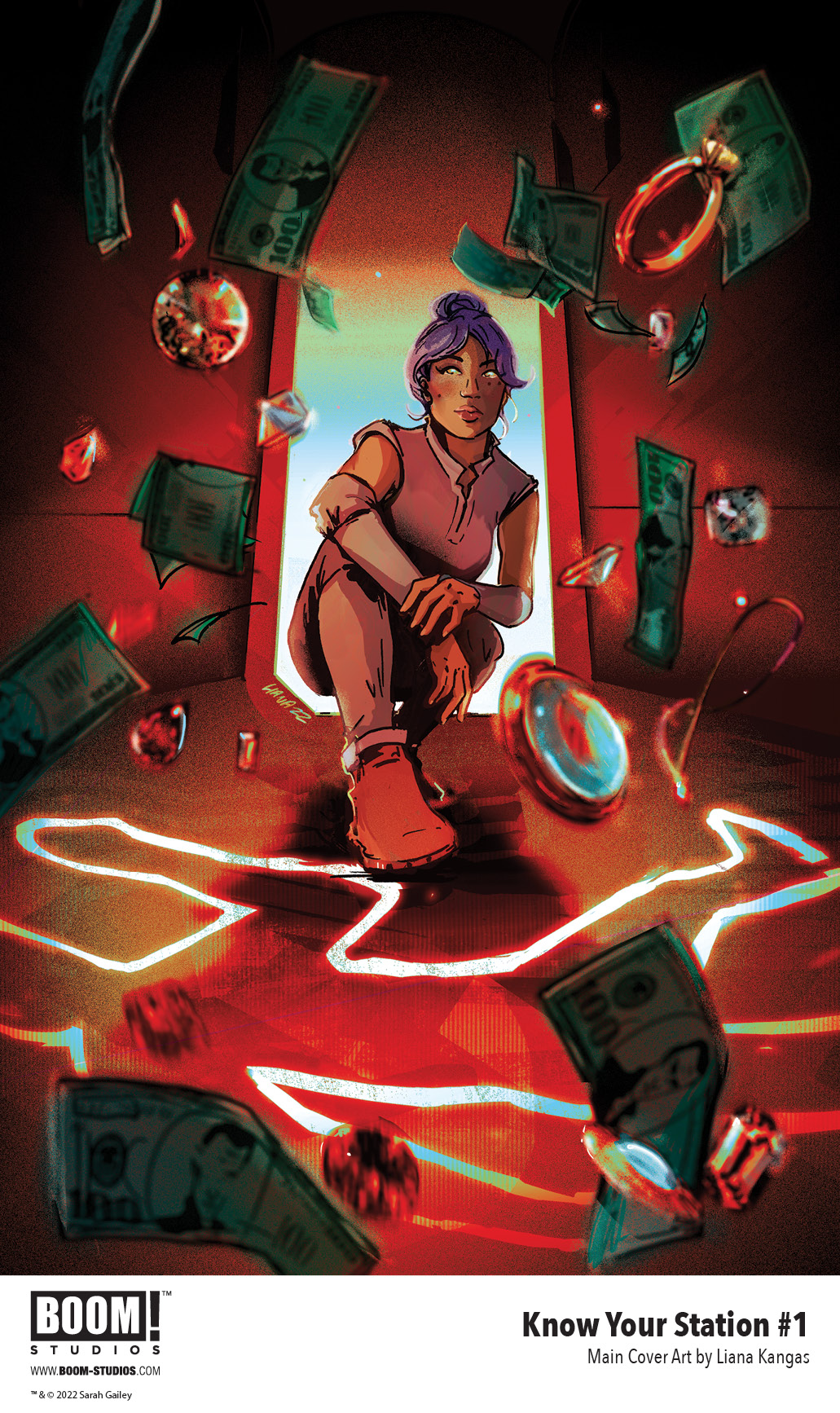 LOS ANGELES, CA (September 7, 2022) – BOOM! Studios announced today KNOW YOUR STATION, a brand new five-issue limited series from the highly acclaimed writer Sarah Gailey (Eat the Rich, Magic for Liars), with star artist Liana Kangas (TRVE KVLT) that takes a stab at the ultra-wealthy, their dreams of escaping the very planet they’ve put in peril, and the consequences of a future that might not be so far away, available in December 2022.

Death is the great leveler, even for the 1%… the wealthiest people in the solar system abandoned the Earth for a private sanctuary in space, leaving the rest of us to die amidst cataclysmic climate change. But the ultra-wealthy won’t be safe for long…

A murderer is on the loose, specifically targeting the super-rich! Soon, Elise, an employee of the Avulsion Corporation, is wrapped up in a deadly investigation, with each issue of this outrageously macabre series featuring a new, diabolically different kill!

Hugo Award winner and bestselling author Sarah Gailey is an internationally published writer of fiction and nonfiction. Their nonfiction has been published by Mashable and the Boston Globe. Their short fiction credits include Vice and The Atlantic. Their debut novella, River of Teeth, was a 2018 Hugo and Nebula Award finalist. Their highly acclaimed debut original comic book series, Eat the Rich, with BOOM! Studios launched in 2020, and they are currently the series writer for The Vampire Slayer from BOOM! Studios. Their bestselling adult novels, Magic For Liars, The Echo Wife, and Just Like Home are available now.

“I could not be more excited to explore new frontiers of wealth and violence in KNOW YOUR STATION, a series in which space is no longer the one place that hasn’t been corrupted by capitalism,” said Gailey. “Working with Liana Kangas to develop this series has been a source of incredible creative joy, and there couldn’t be a better home for this story than BOOM! I am just thrilled to get to work with Liana to shine a light on the gory inner workings of the 1%.”

Liana Kangas is a comic artist and writer living in Memphis. Liana is the artist and co-creator of TRVE KVLT with IDW and She Said Destroy with Vault Comics, as well as the co-writer/co-creator of Seeds of Eden with TKO. Liana has drawn for Star Wars Adventures, Razorblades, Blondie and Joan Jett graphic novels with Z2, Archie Comics, and 2000AD, as well as being the cover artist on titles from Image, IDW, Vault Comics, Oni Press, and others. You can learn more about Liana on lianakangas.com and social media @lianakangas.

“Getting to work with a phenomenal editorial team and favorite prose writer of mine, Sarah Gailey, is quite the foundation for my excitement to construct and create with them on this epically gruesome series,” said Kangas. “There’s something to be said about watching someone mysteriously murdering billionaires AND stick it to the man—but IN SPACE? Sign me up.”

“Sarah and Liana’s take on horror is so deliciously satisfying, with just the right edge of satire and with justice being served, rightfully so, to the shady and untouchable powers behind most of humanity’s self-inflicted ills,” said Elizabeth Brei, Editor, BOOM! Studios. “Starting with the wildly successful ‘Eat the Rich,’ and continuing in the best tradition of stories like ‘Knives Out,’ here comes the sci fi manhunt of the year in KNOW YOUR STATION.”

KNOW YOUR STATION is the newest release from BOOM! Studios’ eponymous imprint, home to critically acclaimed original series, including BRZRKR by Keanu Reeves, Matt Kindt, and Ron Garney; We Only Find Them When They’re Dead by Al Ewing and Simone Di Meo; Once & Future by Kieron Gillen and Dan Mora; Basilisk by Cullen Bunn and Jonas Scharf; Grim by Stephanie Phillips and Flaviano; and the upcoming series Briar by Christopher Cantwell and Germán García; Stuff of Nightmares by R.L. Stine and A,L. Kaplan; The Approach by Jeremy Haun, Jason A. Hurley, and Jesus Hervas; Damn Them All by Simon Spurrier and Charlie Adlard; Behold, Behemoth by Tate Brombal and Nick Robles; Specs by David M. Booher and Chris Shehan; and Once Upon a Time at the End of the World by Jason Aaron, Alexandre Tefenkgi, Leila del Duca, and Nick Dragotta. The imprint also publishes popular licensed properties, including Dune: Waters of Kanly from Brian Herbert, Kevin J. Anderson, and Francesco Mortarino; Mighty Morphin and Power Rangers from Ryan Parrott, Marco Renna, and Moises Hidalgo; and Magic from Jed McKay and Ig Guara.

Print copies of KNOW YOUR STATION #1 will be available for sale in December 2022 exclusively at local comic book shops (use comicshoplocator.com to find the nearest one) or at the BOOM! Studios webstore. Digital copies can be purchased from content providers, including comiXology, iBooks, Google Play, and Kindle.

For continuing news on KNOW YOUR STATION and more from BOOM! Studios, stay tuned to boom-studios.com and follow @boomstudios on Twitter. 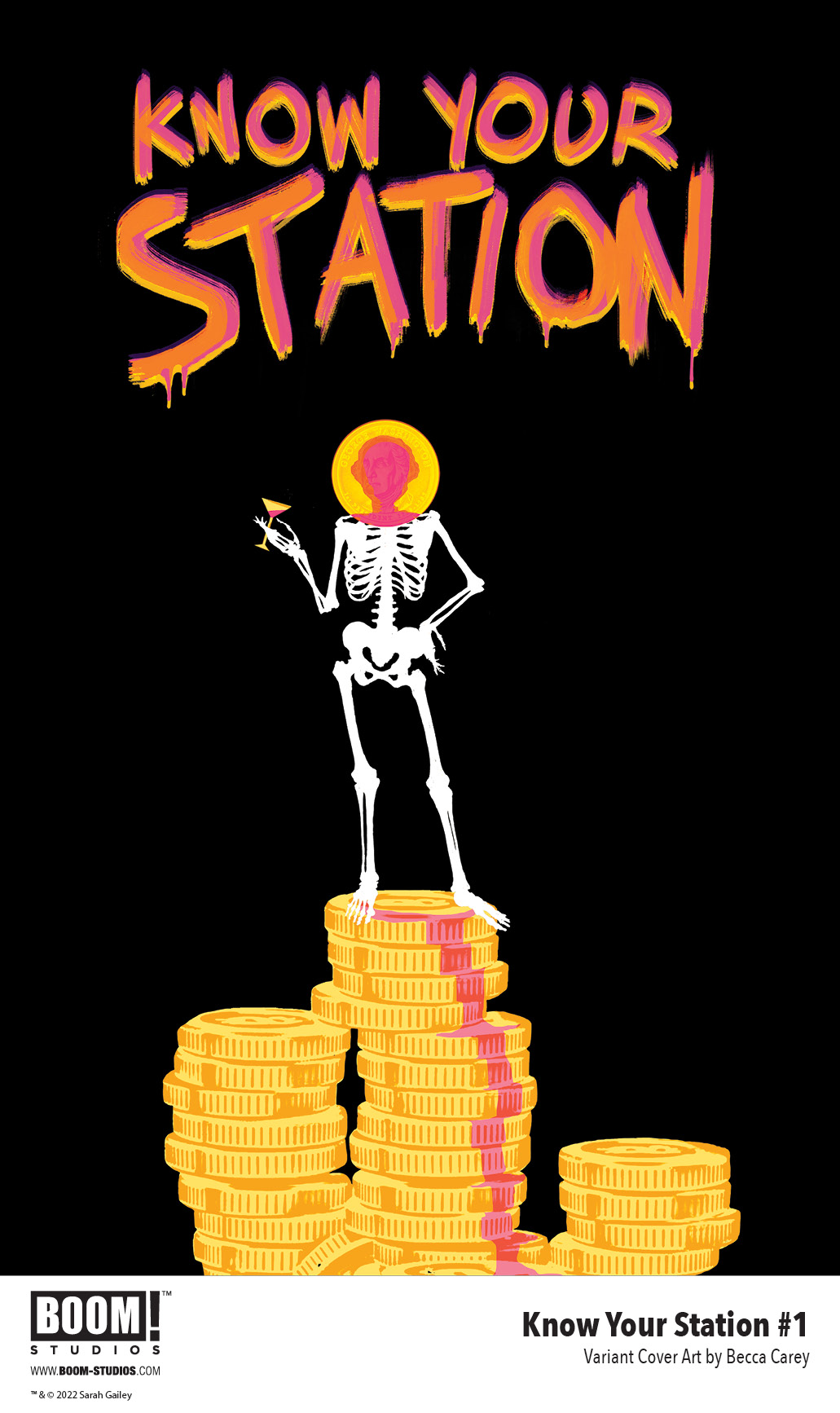 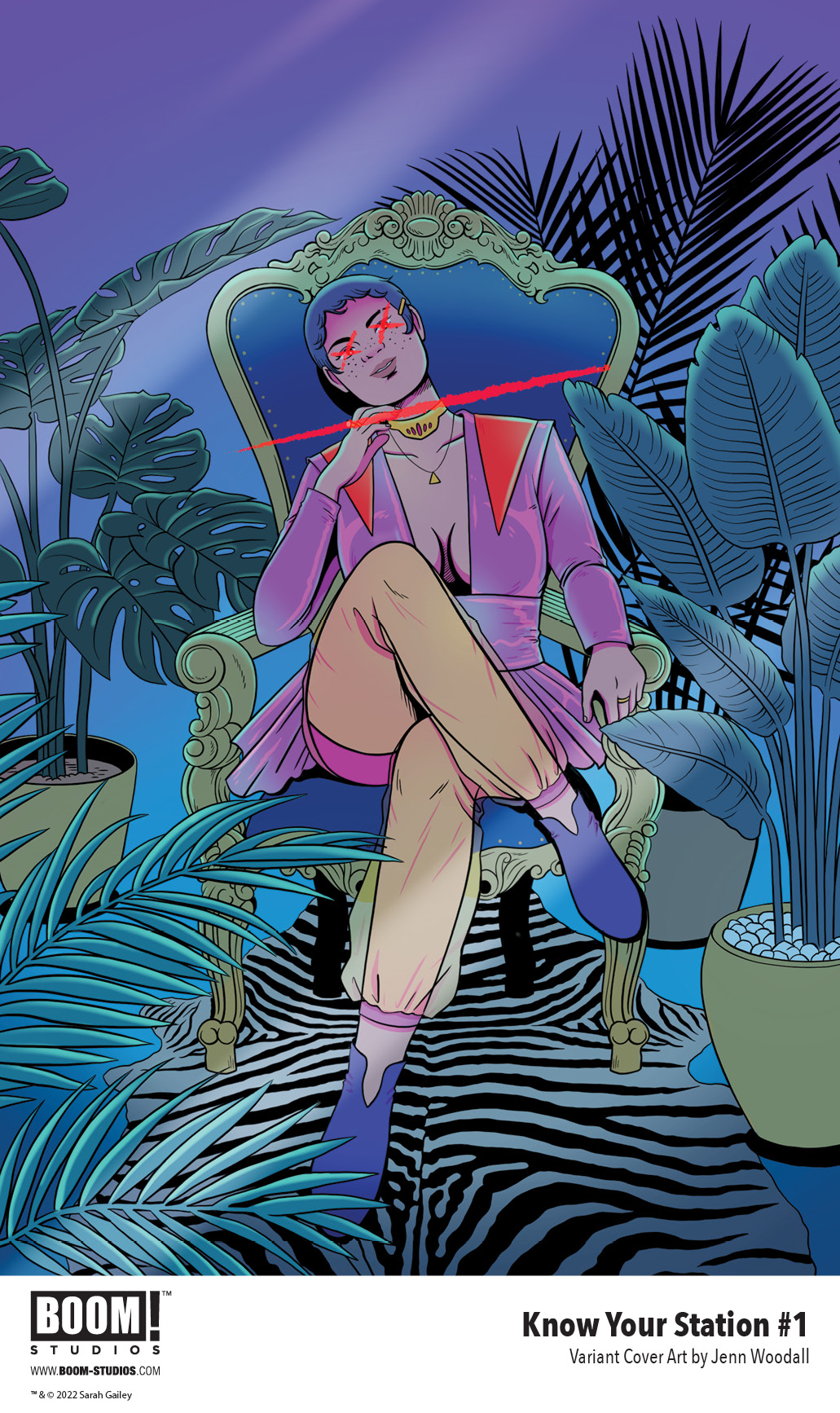