You’ve heard of The Avengers. The Justice League. The X-Men, Teen Titans, Guardians of the Galaxy, Defenders, The Legion of Superheroes. Even The Watchmen. But what if we told you that there was another team of colorfully clad heroes that you’ve never heard of who are equally as influential to comic books and the industry as a whole? Who is this mystery team, you ask? Archie Comics very own stable of masked heroes; The Mighty Crusaders!
Join us now for part two of our special five part mini-series where we dive into the first revival of the MLJ characters with Mighty Comics, investigate the strange way they both influenced and were influenced by the early Marvel Comics and discover how The Mighty Crusaders were formed in a budding industry with “Too Many Superheroes”! 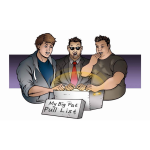