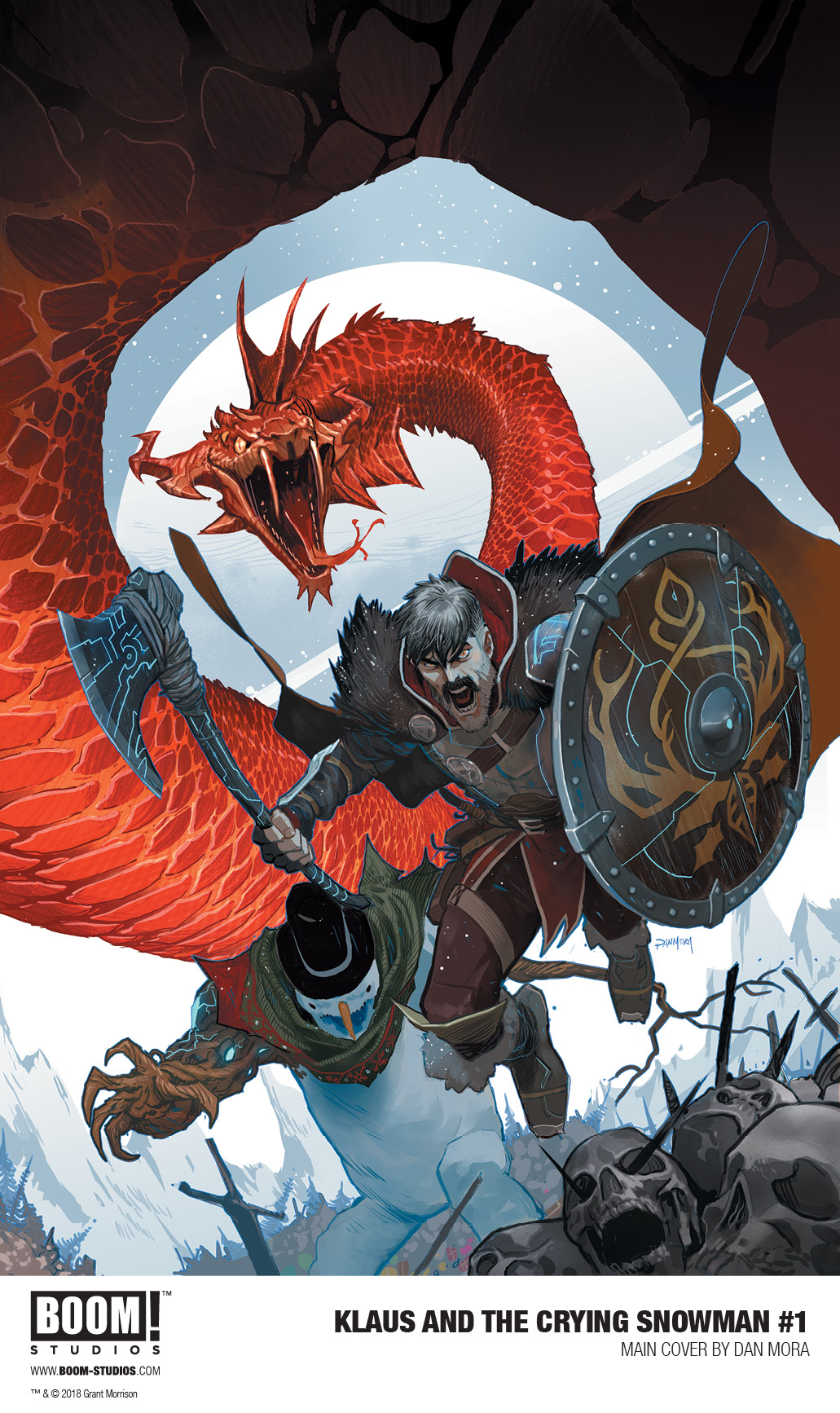 Santa Claus is  a myth. He’s a legend. He’s loved worldwide by children and adults alike . . . but does anyone truly know his origin and greatest adventures? Launching in 2015, Klaus has revealed this hidden history, from a dark fantastic past of myth and magic, to modern stories of holiday cheer and terror.

KLAUS AND THE CRYING SNOWMAN #1 continues the annual holiday tradition of new Klaus comic book releases, dating back to the franchise launch. Now, Klaus must help an absentee dad-turned-snowman make amends before melting away for good. And probably before he’s defeated by a pantheon of Norse Gods and their minions.

All in a day’s work for Santa Claus, right?

“’It’s beginning to look a lot like doomsday… in the 2018 Klaus Christmas special!” said writer Grant Morrison. “Working with Dan Mora and BOOM! Studios on these annual adventures of everyone’s favorite sword-slinging immortal gift-giver is more fun than a flying sleigh ride through the Aurora Borealis! Dan has rapidly established himself as one of my all-time favorite collaborators and this year he excels himself yet again as Klaus and his allies face the apocalyptic return of the beings who destroyed the Norse Gods! Can Klaus, his white wolf Lilli, and superhuman comrades including the Romanian Communist Santa Claus Mos Gerila, prevent the end of days and the ultimate destruction of Christmas as a concept? What do you think?”

“It’s that time of the year, another Klaus Christmas Special that will allow you to experience the Santa Claus story in different and mysterious ways,” said artist Dan Mora. “This is the fourth year we’ve been working on the series, and returning each year to work with Grant and the team is an honor and a pleasure. Grant has created another crazy, amazing story this year for the demigod Klaus and his wolf sidekick, and it’s a rewarding, never-ending challenge to try and keep up with Grant’s imagination as I visually bring this world to life!”

KLAUS AND THE CRYING SNOWMAN #1 features a main cover and a variant cover both illustrated by Mora.

“It wouldn’t be the holidays without some snow, good cheer…and a brand-new Klaus story that will blow you away,” said Eric Harburn, Senior Editor, BOOM! Studios. “This year, Grant and Dan pull out all the stops with a sci-fi/fantasy adventure that takes Klaus from Ragnarok all the way to the outer rings of Saturn, facing his biggest threat yet.”

Print copies of KLAUS AND THE CRYING SNOWMAN #1 will be available for sale in December 2018 at local comic book shops (use comicshoplocator.com to find the nearest one) or at the BOOM! Studios webstore. Digital copies can be purchased from content providers, including comiXology, iBooks, Google Play, and the BOOM! Studios app.

Additionally, KLAUS: THE NEW ADVENTURES OF SANTA CLAUS, an all new hardcover collection of the titular hero’s acclaimed holiday specials, will be available for sale in comic shops on September 26th and in bookstores on October 2nd. KLAUS: HOW SANTA CLAUS BEGAN, the hardcover collection of the original award-winning series, is currently available everywhere books are sold.

For continuing news on KLAUS AND THE CRYING SNOWMAN and more from BOOM! Studios,  stay tuned to www.boom-studios.com and follow @boomstudios on Twitter. 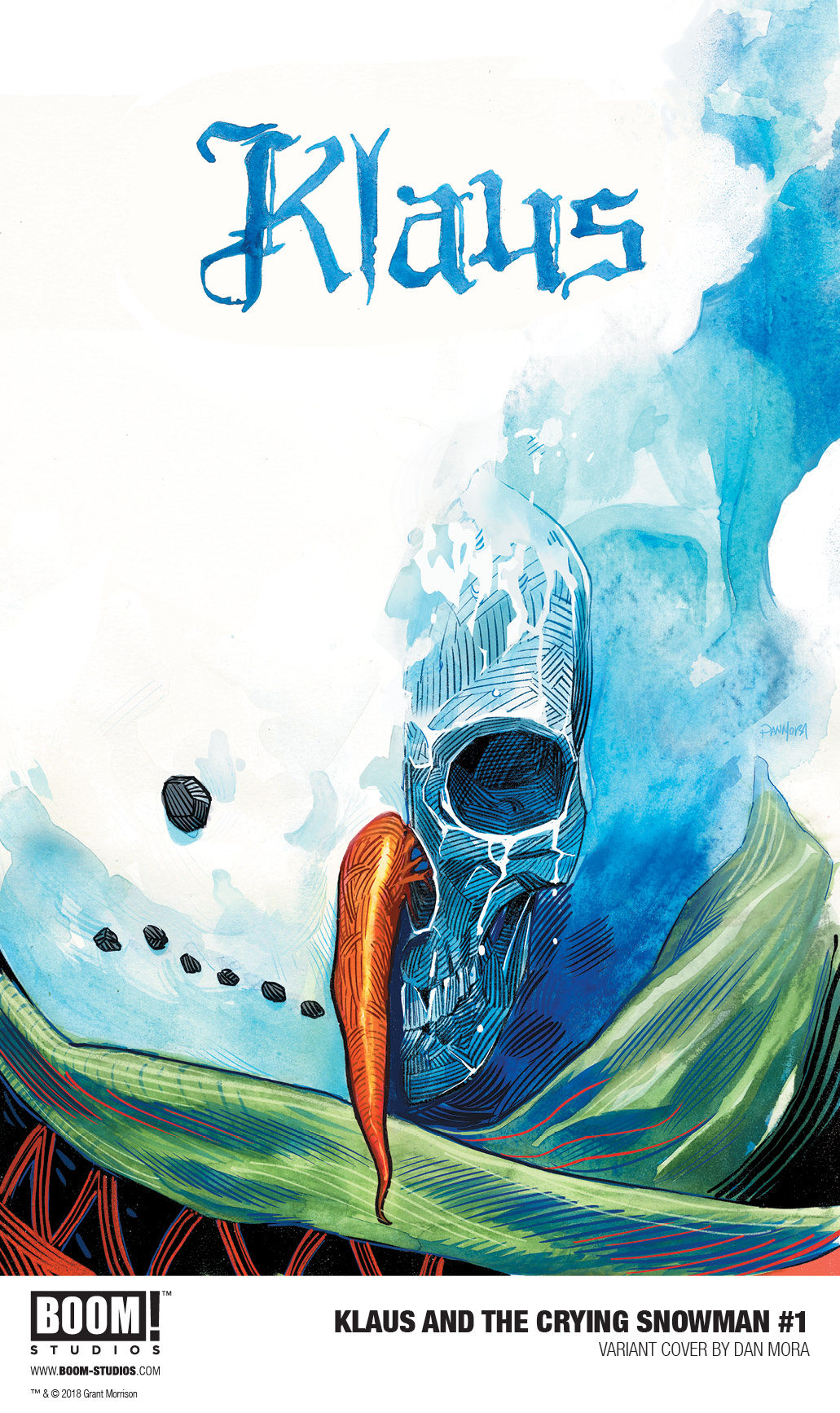