Comic book artist Ken Johnston has been working for Golden Era Comics as a cover artist and editor, as well as designing the publisher’s logo. We interviewed Ken about his background as well as his work.

First Comics News: Tell us about yourself.

Ken Johnston: “Personal biography” or “comic book history”…you get to decide. June 1976 was my high school graduation in Phoenix, AZ. Two weeks later, still 17 years old, I was on the road to upstate NY – – where I would be living with an Aunt and her school-age kids and working at a gas station she owned. Once there, she saw my interest in cartooning, and plans quickly got changed. I was immediately enrolled at SUNY in Buffalo, NY for 2 weeks of summer cartooning classes with Brad Anderson (Marmaduke) and Bill Rechin (Crock). An awesome time with two incredible mentors, quickly followed by a trip to New York City, with my Aunt insisting I take my portfolio to Marvel Comics. WHAT??? My “portfolio” was a manila folder with high school drawings in it. A wealth of embarrassment. But, teeth chattering, I went. Marvel was #2 in those days, and I thought I had a better shot at talking with someone there than at #1 DC. The reception area was a small windowless room with a receptionists’ desk in the middle, no visitor chairs, and bare walls. There was a closed-door behind the desk…presumably access to the “bullpen” and one which I was unable to breach because of the “bulldog” behind that desk. I left there completely defeated. My Aunt, however, was undaunted. On to Rockefeller Center and DC Comics. WHAAAATTT??? If I couldn’t get into Marvel, what chance did I have at DC?!? Up the elevator, I went to DC Comics (I don’t clearly remember, but it seemed like they were on something like the 30th floor!). I walked through a HUGE glass door and crossed a MASSIVE carpeted lobby to a GIANT glass-topped reception desk, behind which was the TEENY TINIEST old lady.

Her (with smoker’s voice): WHATTYA NEED?
Me: Ummm…
Her: WELL?
Me: (totally intimidated, but now realizing I’m holding my pathetic manila folder): I have some artwork to show?
Her: WHO DO YOU WANT TO SEE?
Me (now nearly incontinent): uhhhh…Julius Schwartz?
Her: HANG ON (gets on the phone).
Out of a doorway comes JULIUS SCHWARTZ! AAAAGGGH!
Julius Schwartz: HEY, I’M IN A MEETING RIGHT NOW. YOU HAVE ARTWORK?
Me: Y-yeah
Julius Schwartz: FOLLOW ME.
We go to the longest hallway I’ve ever seen with doors all the way down both sides. Julius Schwartz bellows down the hallway “HEY, JACK!!!”
Halfway down a head pops out, “YEAH??”
Julius Schwartz: “GIVE THIS GUY THE BUSINESS”
(the all-caps are not a mistake…apparently, everyone yells in NYC).

Then Mr. Schwartz is gone. I go down the hall to meet JACK: Jack C. Harris. WOW! I’ve seen his name in the comic letter pages I’ve read! So Mr. Harris reviews my (purely substandard) work and patiently makes a few kindly suggestions, then pulls out a few copied pages from a new artist, who, he explains, is only 16 years old (!) but is about to be published in a new title called Black Lightning – – Trevor Von Eeden. This was a sort of “don’t give up kid” encouragement to me. After an unhurried conversation, he says “who else would you like to meet?” What a great invitation! I asked if Mr. Denny O’Neil happened to be around. I had recently begun collecting a new series called Richard Dragon, Kung Fu Fighter, and had a letter printed in one of the issues and wanted to thank him. “Oh, he’s right next door!” YEAAAAHHHHH! So I was dropped off for a chat with Dennis O’Neil, but we were interrupted by an artist from across the hall whose accent would’ve made it difficult to understand him except that all he spoke were curse words. “Meet Sergio Aragones, Ken…no, he’s not mad. He always talks this way”. I can die happy. Denny O’Neill took me across the hall to meet another hero named Joe Kubert, who had just started a cartooning school in New Jersey – – in its first year right then. Talked for some time with Mr. Kubert who gave me all the stuff to sign up (couldn’t actually do anything about it until two years later, when I actually visited the Joe Kubert School, which was then meeting in a great big old house – – sadly, I never could afford to go. But have always been proud to have been invited by Joe himself to enroll). I am especially grateful to my wise, aggressive Aunt, DC Comics (always was my fave), and Mr. Jack C. Harris for his unexpected kindness and encouragement to a 17-year-old comic artist wannabe, who became a graphic designer, owned a comic shop for a couple of years…and finally had his first comic story published at age 51.

Finally had my first comic book story published in 2010 (Having crossed that item off my “bucket list” I was going to give it up, but was lured back into it with an offer by my indy publisher to illustrate a story by Mr. Stephen Skeates! Who could say no to that?!? This was a small story called Depthon of the Deep and I couldn’t be more proud and humbled to have worked with this great writer!

1st: It must’ve been a thrill to work on a story scripted by the legendary Steve Skeates! Any other memories that come to mind from your career as an artist?

Ken: My first professional cartoon sale was to Charlton. Most folks don’t know that Charlton only published comic books to keep their presses running 24/7. They mainly produced cheap novels, sheet music, and compilations of single-panel humor cartoons in magazine format such as “Laff Parade,” “Cartoon Carnival”. Sold two b/w panel cartoons to Charlton in 1977. Earned $5 each. By the time Charlton closed up shop for good, they paid $15 per. Pretty sure it was us overpaid cartoonists that doomed the company!

1st: What work have you done for Golden Era Comics?

Ken: I had the honor and pleasure of assisting in launching the Golden Era. Wrote and drew The Clock story in issue #1 and drew covers for issues 2 and 3. Also, print production work and logo design and lettering.

1st: What might your future hold as far as comic book work?

Ken: As to future comic work? Anything goes. So many indie publishers are out there and hungry for willing talent. Unfortunately, most have no funding so it’s important to select projects carefully. I just agreed to another cover for Golden Era and some character development designs. I really love doing logo designs for comics, so hopefully will be doing more of that going forward. Sky’s the limit…up, up, and away! 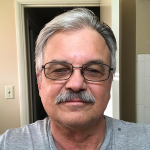 Mark F. Davis is the publisher of Golden Era Comics, a company that believes in making old school style comics. A find them at IndyPlanet.com. On Facebook I’m at “Golden Era Comics” group and you can browse or join.