It seemed that ZIP COMICS was starting to lose much of its zip by the time ZIP #36 was published. What kept this book from being a waste of precious newsprint were the two stories that opened and closed the book. And what stories they were! The STEEL STERLING was excellent. What made it even more interesting was opening it by having Officer Clancy rescue a Chinese-American Boy Scout from being beaten by a mob of kids because he was mistaken for Japanese (which reflected on the wartime paranoia that led to the imprisonment of thousands of Japanese-Americans during World War II). And Irv Novick once again delivered another exceptional job on the artwork. As for THE WEB, another excellent story with Sam Cooper delivering the goods on this intriguing little mystery story.

As for the humor features; with the possible exception of GINGER, the less said about them the better.

It seems this was one of the last decent issues of ZIP. Because after issue # 38 (the Web’s last appearance), it was all downhill from there (as ZIP #45 painfully proved). And this is just my opinion.

P. S. If you want to read a really good humor strip of the period involving Latinos, check out any of Gus Arriola’s GORDO Sunday half-pages of the period. They come off as far easier on the funny-bone than any of the SENOR BANANA stories. 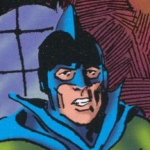