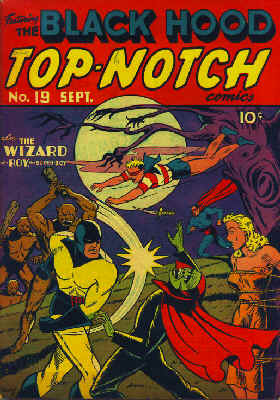 The impact of the album Sgt. Pepper’s Lonely Hearts Club Band by The Beatles (an LP I was listening to when I read this book before reviewing) was so great, any album by an artist that showed an artist at a high watermark of creativity was called that artist’s “Sgt. Pepper”. It’s safe to say that had Top-Notch Comics #19 (cover-dated September 1941) had been a record album, it would have been that title’s “Sgt. Pepper”. This issue caught the book at the apex of creativity. How good was it? If you can get past a cool Al Camy cover, we could listen to the tracks er… I mean look at the contents:

THE BLACK HOOD: THE Must Read story of the book. Way back in Top-Notch #9, we saw how the Skull framed police officer Kip Burland and led to his becoming the Black Hood. Here’s the story of how the Black Hood finally brought an end to the reign of terror of the Skull, but not before going more than a few incidents along the way. Harry Shorten (script) and Al Camy (art) deliver 14 pages worth of Golden Age thrills.

THE WIZARD: How does one follow up the book’s Must Read story? The team of Shorten and Camy shows us how to do it by having The Wizard and Roy battle a ruthless terrorist organization known as the Purple Mafia in another exciting tale.

FRAN FRAZER: While spending time in Singapore, Fran Frazer and Hal Davis find themselves involved in a battle with Japanese agents after they catch a pigeon carrying a coded message.

KEITH KORNELL: In an offbeat story illustrated by Warren King, Lieutenant Keith Kornell and his men get into a contest between horse cavalry and the newest mechanized units.

THE FIREFLY: The Firefly finds danger in the giant economy size as he battles a mad scientist who created a serum that increases the size of animals to send them on a destructive rampage. Joe Blair and Warren King deliver the goods on this thriller.

THE ST. LOUIS KID: In the continuation of the previous issue’s story, Jim Jennings finds himself not only trying to defeat three boxers in the ring at the beginning of the story; he also has to unmask a phony count as well. Looking at the artwork by George Storm, his cartoony style fits in more with this strip (and Kayo Ward in Pep Comics) than it did with The Hangman (which he was drawing at the time).

WINGS JOHNSON: In another of those stories (from Joe Blair and Ed Smalle) that combine adventure and humor; Wings and Higgins team with 2 raw recruits to bomb a Nazi invasion base at Calais.

BOB PHANTOM: Warren King once again delivers the goods on the artwork as Bob Phantom investigates a jewel robbery at a fashionable diamond mart.

KARDAK THE MYSTIC MAGICIAN: After the discovery of the body of a man who had been given “cement overshoes”, Karnak tries to bring the ganglord who organized the hit to justice. Paul Reinman delivers the goods on the artwork in this interesting little story.

Add such things as a text story; ads for Jackpot #2, Blue Ribbon #16, and Shield-Wizard #4; and a Novick drew pinup of The Shield and Dusty on the back cover; you get one of the best books ever to come from the offices of MLJ Magazines. A book that could arguably be thought of as Top-Notch’s “Sgt. Pepper”.