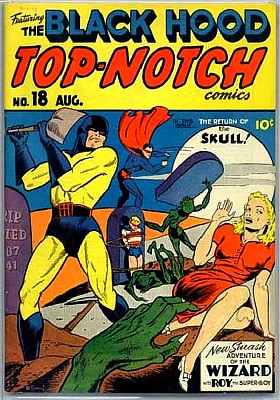 In my review of Top-Notch #17, I wrote about the fact that three of the stories in that issue ended in cliffhangers. In Top-Notch Comics #18, not only do they resolve those three cliffhangers, but they also used another device to establish continuity; reintroducing minor characters that appeared in previous stories. After we get past another great Al Camy cover, we’ll see how they used those two devices:THE BLACK HOOD; This issue of Top-Notch gets off to a great start as the Black Hood tries to prevent the Skull from stealing England’s crown jewels. Another great tale from Harry Shorten (script) and Al Camy (art). Not only does a minor character from the previous issue’s story (Slim the plumber) appear, we also get a sequence that has Sgt. McGinty tries to arrest Kip Burland for the jailbreak he committed in Top-Notch #9 (remember, at the time Burland was a fugitive thanks to the Skull).

THE WIZARD; What do you get when you put together the Wizard and Roy, reporter Jane Barlow, Moe the cab driver (who appeared in the previous issue’s story), an amorous ostrich, and a gang of crooks led by a lady mobster? You get this slightly tongue-in-cheek story from the team of Messrs. Shorten and Camy.

FRAN FRAZER; Once again Fran and Hal find themselves in trouble in a foreign country. This time they are trying to escape from Japanese soldiers who caught them in Indochina (now Viet-Nam).

KEITH KORNELL; While stationed in Alaska, Keith Kornell helps save the life of a young boy with diphtheria by trying to bring the medicine he needs. Featuring art by Bob Montana.

THE FIREFLY; In the conclusion of the previous issue’s story, the Firefly renews his battle with the Mummy as he tries to rescue Joan Burton from his clutches during their final duel in the ruins of an ancient temple. Once again Warren King delivers on the artwork.

THE ST. LOUIS KID; In a story that leads into another cliffhanger ending, boxer Jim Jennings finds himself trying to help the finances of a once-wealthy family by getting into an exhibition match where he takes on three individuals at once.

WINGS JOHNSON; In the conclusion of the previous issue’s story, Wings and his associates find themselves cornered by Nazis in a supposed haunted house and try to get out of this situation before they end up becoming ghosts themselves.

BOB PHANTOM; Not only does Bob Phantom finds himself trying to rescue Jinx Friday from certain death in a warehouse fire, but he also has to solve the murder of boxer Johnny Napoleon. Ramona Patenaude provides the artwork for the second part of this two-part adventure.

KARDAK; Harry Shorten and Paul Reinman tell the story of how Kardak teaches a spoiled heiress and her family a valuable lesson in how the other half lives after the heiress accidentally runs down a poor girl.