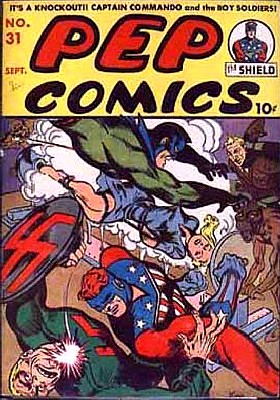 PEP COMICS #31 was one of those comic books that one could say “Damn! That was a great book!” after reading it from cover to cover. I think it was one of the best issues ever of that title. here’s what I thought of each of the stories individually:

THE SHIELD: Once again he proved that even without his original super-powers, he was more than a match for any Axis super-baddie. And his return bout with The Strangler more than proves it. What blew me away about this story was the character of The Snowbird. Having him be a cokehead was bad enough. But making him a cokehead who also happened to be an expert with a Thompson sub-machine gun was too much! (This is one of those stories that Archie could never reprint without sullying its wholesome image.) And Irv Novick once again does an excellent job with the artwork on this story.

THE HANGMAN: The Hunter was probably one of the best villains ever to face MLJ’s Dark Knight and his first appearance was one of the best stories of the series. This story reminded me a lot of the short story THE WORLD’S MOST DANGEROUS GAME. Hopefully, you’ll be able to post the Hunter’s eventual rematch with the Hangman (in HANGMAN #4) in the future.

CAPTAIN COMMANDO AND THE BOY SOLDIERS: I liked the early stories because of the father-son relationship between the Captain and his son and Alex Blum’s artwork (his style reminds me a lot of the works of Frank Godwin and Alex Raymond). These early tales had a charm all their own. I felt the strip lost some of that charm when the powers-that-be at MLJ decided to turn it into a BOY COMMANDOS doppelganger (although Irv Novick did an excellent job on those stories).

ARCHIE: What can I say? The strip was starting to hit its stride around this time. Once again the strip introduces a major supporting character (Mr. Lodge) and once again a classic ARCHIE situation comes into being!

SERGENT BOYLE: This story was a hoot! Not only do we get a tongue – in – cheek adventure story, we also a humorous look behind the scenes at MLJ as well.

DANNY IN WONDERLAND: Quite interesting and quite sad at the same time. The funeral for Snapper was one of the most poignant scenes in comics up to that time, especially when you consider that this was a strip that was very likely aimed at the young children in the reading audience.

BENTLEY OF SCOTLAND YARD: Probably one the best stories ever for this strip. This was probably the best of all of MLJ’s non-superhero adventure strips (this is just my opinion).

Add 2 great text stories and you have one of the best issues ever of PEP COMICS!